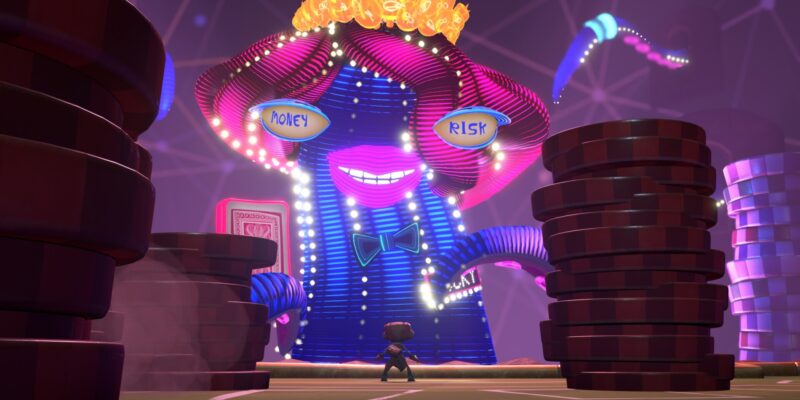 Like most of the boss battles in Psychonauts 2, the Lucktopus isn’t particularly challenging. However, you may not know what to do right away. The Lucktopus is, of course, the first boss you face in the game. You’ll fight them at the end of Hollis’ world and it requires a bit of thinking on your toes. The fight is rather reminiscent of some of the first game’s boss fights, as it’s built around throwing things with telekinesis.

Before we dive into the fight itself, keep in mind that those glowy green things that keep popping up on the sides of the arena all contain health. Just walk up and hit them and you can grab a pick-up if you find yourself getting low. The first thing the Lucktopus does is pull out a card with bombs on them. Once she slams the card down, just move. All of the bombs will miss you, but stick to the ground. Don’t go near them, or you’ll waste a bomb and take damage.

You’ll notice that one of the Lucktopus’ tentacles is holding cards with the other interns stuck in them. Once the bombs are in place, use telekinesis to grab one and then chunk it at the arm holding the cards. You’ll need to do this more than once. Once you do, she’ll freak out and idea bubbles will appear on the side the arm was on. Use mental connection to ride these, avoid the enemy, and then use your marksmanship skill to shoot the wall in her head. Then again use mental connection to ride into her open head and hit the heart until she throws you out. 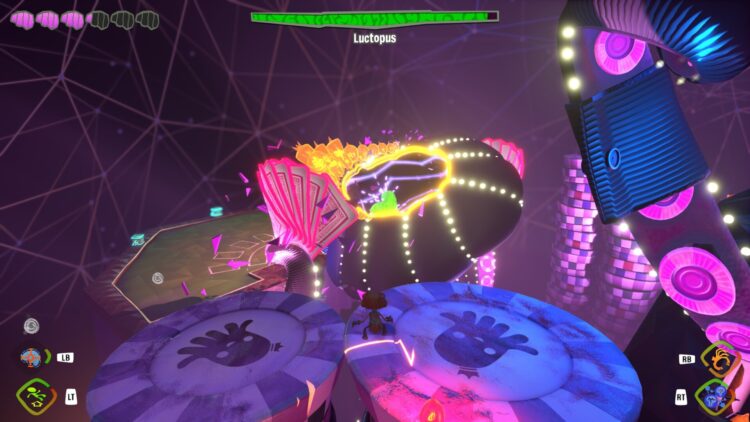 How to beat the Lucktopus in Psychonauts 2

For her second phase, things get a bit more complicated. Red outlines will appear on the arena floor. Pay attention to where these are aiming and avoid the cards that show up as best you can. Once she’s finished with this attack, she’ll throw more bombs at you. This is really no different from phase one, so repeat what you just did and damage her heart one more time. When you find yourself back in the arena, she has one more trick up her sleeve: a card with a lighting bolt on it.

When she puts this card down, the floor will become electrified. All you have to do is jump on top of the poker chips and wait this out and Raz will be safely out of harm’s way. Don’t jump off the chips until the floor is no longer electrified, however. Once it’s safe, you’re going to be repeating step one once again. This time is the last time, though, so do it once more and she’ll be done. There, you’ve beaten the Lucktopus. While she isn’t at all hard, she’s one of the few bosses in Psychonauts 2 that has anything that could feasibly trip somebody up, as you can mostly just shoot at the other ones or the way forward is so obvious that you can’t not know what to do. 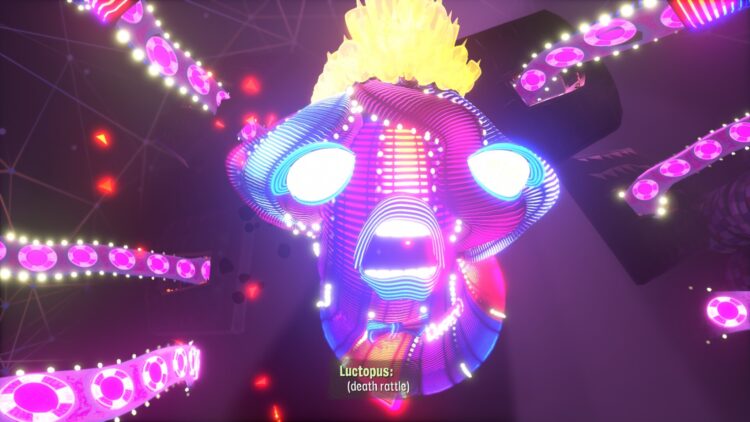 Psychonauts 2: How to unshatter Ford’s mind