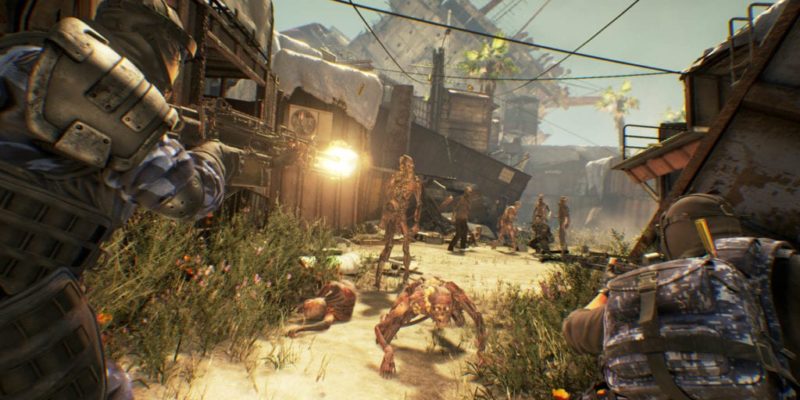 That’s right folks, it’s another zombie themed game but will Moving Hazard bring something new to the genre?

Psyop Games and IllFonic have just announced Moving Hazard which is set fifty years in the future where city states are battling for resources following the Zombie Apocalypse. The game is being described as a competitive team based shooter where players will face off against other players in the zombie infested wasteland.

What makes this game sound slightly more appealing than a standard zombie-fest shooter is that player will have to “weaponise” the zombies and use them against the other teams. As an example, there is the Pheromone Attractor Molotov which when chucked at zombies which will turn them into a frenzied state and actively hunt down the opposition for you. The idea is to have weapons that will change a zombie’s behaviour to help you  and your team get the upper hand in battle.

The game has been in production for a year and is expected to be released in 2016 with six team based multiplayer maps. Game modes revealed so far include Team Deathmatch, Scavenger and King of the Hill, with more being revealed at a later date.

Moving Hazard will also come with a single player scenario mode and cooperative horde modes. There will also be the ability to upgrade personal stats and hideouts with the accumulation of XP as you play

At least we now now what IllFonic are up to following their departure from the Star Citizen FPS module development.

Keep an eye on the official site for updates and enjoy these first pieces of art and screenshots.