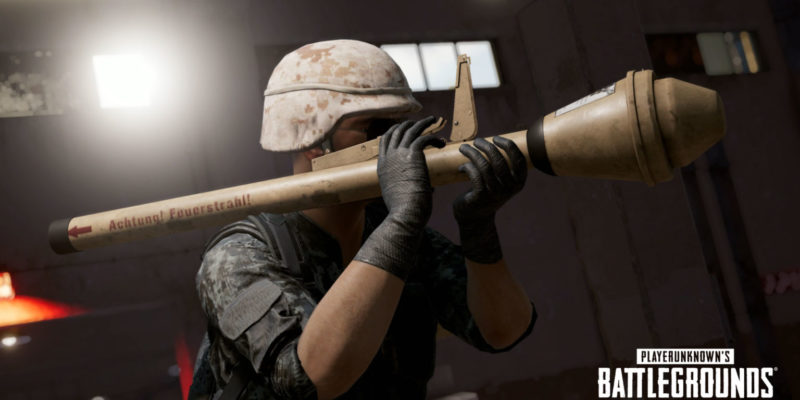 Update 6.3 has just landed on the PUBG Test Servers, and it’s bringing some explosive action to Karakin. The major addition to the game is the rocket launcher known as the Panzerfaust. Some other weapons have also been rebalanced to increase their usage.

The Panzerfaust was teased at the start of PUBG Season 6, but a weapon of such magnitude has the potential to throw off the balance of the entire game. So, understandably, it’s taken a couple of patches to get it into the hands of players.

The Panzerfaust is exclusive to PUBG‘s Karakin map. It’s an uncommon spawn in the world but is guaranteed to be in every airdrop. The Panzerfaust’s projectile explodes in a 6m radius on impact, but it can also be shot out of the air. ‘Can’ being the keyword there – it’s no easy feat. Once fired, the Panzerfaust tube will be discarded and you will not be able to pick it up again.

The M249 has been removed from care packages and has instead been added to Miramar and Erangel as normal loot. This seems a strange choice, considering that the M249 was one of the better crate weapons. It might have made more sense to remove the AUG A3 and Groza and added them to the maps as rare world spawns.

That said, the M249 has also seen some rebalancing. It’s now a bit less stable, holds less ammo, and does 40 damage instead of 45. You can add a tactical stock to regain the weapon’s stability, and an extended magazine will double its ammo capacity to 150 – that’s even better than before. Of course, 75 bullets should be more than enough to deal with any opponents.

As for the Tommy Gun, it finally has a slot to take Red Dot and Holo Sights. The fire rate has been increased from 700 to 750, bullet spread has been decreased, recoil has been reduced, and the gun’s accuracy while moving has also been increased. The Tommy Gun will likely become a force to be reckoned with in this patch.

All these things are subject to change after some experimenting on the Test Servers. However, based on experience, things in PUBG rarely change between testing and going live. You can check out the complete update 6.3 patch notes on the PUBG website.

PUBG has also recently tested its first Ranked Ruleset and an updated Vikendi. So, you can expect Ranked Matchmaking and a train-filled Vikendi to arrive soon too.

By Michael Feghali4 mins ago
Hardware