Update 12 January: Brendan Greene has responded to the community in a round-about way reminding players they will be setting a max ping which may eliminate players from joining servers outside of their region. Unsurprisingly, the comments on the Twitter post are still calling for a Chinese region lock.

ICYMI on our dev blog in December, we announced we're working to create a system that will provide a fair gameplay experience for all players. These systems take time to build & implement on the servers without major issues, so please bear with us!https://t.co/oxmuka5OZt pic.twitter.com/yIgjxcEUrD

In an update from PUBG regarding BP being distributed unfairly following the PlayerUnkown’s Battlegrounds 1.0 release, players have become frustrated with the game and are demanding PUBG lockout Chinese players from other regions.

The point of the update was to highlight the BP discrepancy which PUBG addressed with the following statement.

“We would first like to offer our most sincere apologies to our users who could not fully enjoy the game because BP was not given out properly, an issue which had occurred after the PC 1.0 launch, up until the Dec 27th (Wed) scheduled maintenance.”

We are compensating you for this loss. BP is given out to users all around the world, so it might not be received right away after clicking on the popup informing you about your BP compensation. Please be patient, you will get your compensation.”

PUBG says that restored BPs can be earned until 9 Feb 11:59PM UTC. With that now sorted out, the Steam community has taken the update thread in an entirely different direction.

There are 377 pages of comments demanding that PUBG do something about the Chinese community who have been causing grief with hacks and there’s also the problem of the language barrier. While the thread is littered with racist comments from some community members, others have been a little more sensible. One player called KingFG points out the problems facing non-Chinese players.

“I personally have the most fun when I play with others, but to play well, you gotta have proper communication and teamwork. For the last couple months, I rarely get squadmates that speak English, which is extremely frustrating. I tried out the LFG system with discord to find some people I can actually talk to, but it’s full of racism and trolls.” 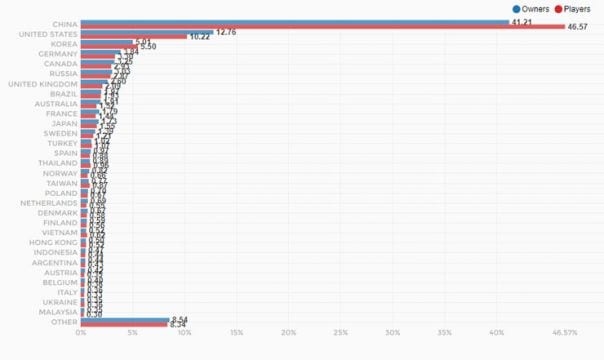 Steamspy stats show the huge amount of Chinese players hooked on PUBG compared to the rest of the world.

With the Chinese players now the majority of the player base, the community wants action and has set up a petition (and another here) to have China region locked. If enough players sign it, the petition will be sent over to PUBG.

Not all Chinese players will be cheating, but looking at it practically, it makes little sense having Chinese speaking players being unable to communicate with players whose primary language is English.

If PUBG wants to keep players engaged with the game and keep it alive, they are going to have to step up and take action or players will leave.

Total War: Three Kingdoms – An Early Overview of what to Expect