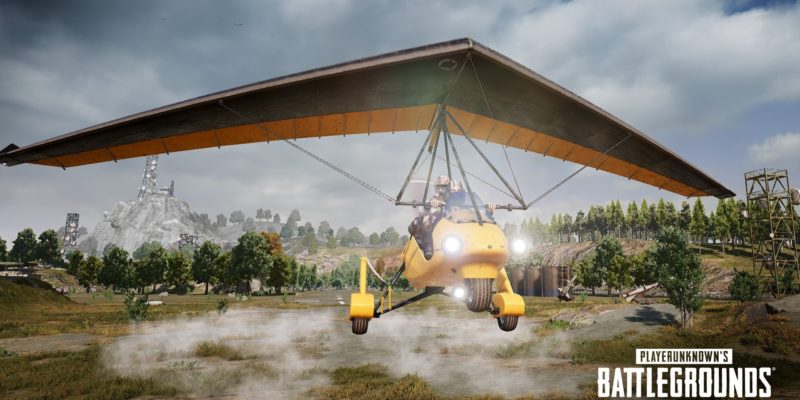 The latest report from PUBG Labs is in and the Motor Glider has been given the green light.  The glider will remain largely the same as it was while being tested in the PUBG Labs, with a few minor changes. Here’s everything you need to know to have a safe flight – until someone starts shooting at you, that is.

The Motor Glider will only be available on Erangel and Miramar and it will be a random spawn around the map. It has two seats – one for the pilot and one for a passenger who can fire using any weapon. All you need to do to takeoff is reach 65km/h and press backward (default is the ‘S’ key). Once you reach 70km/h you will automatically start lifting off the ground.

Motor Gliders will spawn without any fuel in them, so you’ll need to find gas before you get to soar like a vengeful eagle. The fuel consumption rate is linked to the amount of throttle you apply – more throttle means your fuel will deplete faster. Interestingly, there is no maximum altitude for the glider. But the engine will start losing power as you reach greater heights. This is probably to prevent players from hiding in the sky until the end of the game.

As for controlling the glider, ‘W’ and ‘S’ will adjust the pitch (nose up and down). While ‘A’ and ‘D’ will control the roll. Because ‘W’ is being used to dip the glider’s nose down, ‘Left Shift’ needs to be used to control the throttle. And, finally, ‘spacebar’ will apply the handbrake when on the ground.

During testing in the PUBG Labs, Motor Gliders had a 100% spawn chance in 10 locations around the map. When the gliders were added to the live version of the game, this was changed to 10 gliders that could spawn at 40 locations. Meaning each location has a 25% chance to spawn a glider. PUBG Corp has made it clear that these numbers are likely to change in the coming weeks as the spawn balance is tested by players.

What went down in testing?

A lot of gliders, that’s what. Motor Gliders were destroyed via crashing 60% of the time while being tested in PUBG Labs. Maybe a flight school tutorial is in order? Gliders were only brought down by gunfire 25% of the time. Those two stats might be a little misleading because many of the crash landings were probably a direct result of gunfire. So, the gliders were technically still shot down. An average of 10 people per match were run down by the glider’s themselves. Which is awesome.

In another PUBG development, PUBG Corp recently confirmed that a new map called Karakin is being worked on. At first, it will be replacing the troublesome Vikendi and supposedly there will be destructible buildings. You can check out our coverage of that story for more information.

Kunai carves out its sentient tablet warrior legacy this February