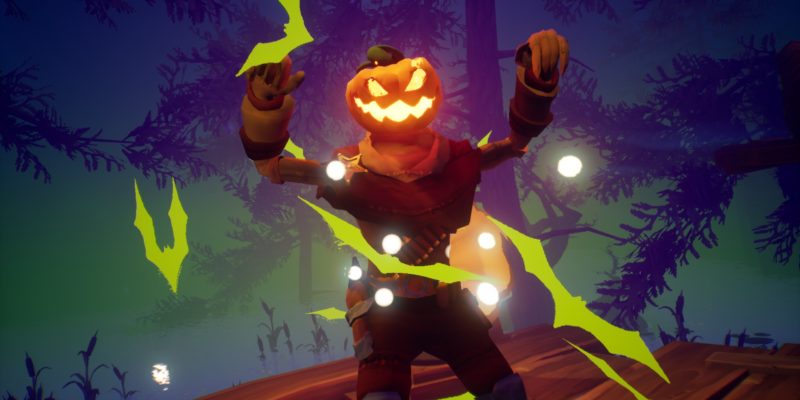 I love the Halloween aesthetic. You know, the really cartoony one with spooky trees and jack o lanterns. I also love platformers, so Pumpkin Jack became firmly embedded onto my radar when it was announced. The game, suffice to say, isn’t quite what I hoped for. It’s got very good visuals, mostly precise controls, and some variety in its gameplay, but it’s too simple, short, easy, and generic to really inspire the kind of enthusiasm that I wanted it to.

If nothing else, Pumpkin Jack handles its plot in the opposite way most would expect. Jack is a notorious trickster spirit brought back to the world by Lucifer himself, as he has brought war upon the human world. The humans responded by getting a wizard to fight for them, so Jack’s job is to kill the wizard. The basic outline is kind of funny, but that’s really all it is. There’s dialogue during the game’s levels and, while it can be humorous, none of it is all that memorable, which can also be applied to the entirety of the game’s narrative.

Dialogue during the levels isn’t voiced outside of a short sample here and there, but a narrator recaps the events of the level you just finished with a little storybook cutscene afterward. These are pointless and I have no idea why they were included, as they add nothing other than annoyance, as you’re hearing a story you just experienced within the last 45 minutes. Speaking of which, most levels take around that, with the entire game running for four-to-five hours based on how much you feel like exploring. There are only six levels in Pumpkin Jack, so this is a very brief game without much replay value. There are two kinds of collectibles to find in each level, though, including 20 crow skulls and a gramophone in each. The only reason to collect the former is that they’re used to purchase skins. As best as I can tell, the gramophones are used for nothing. 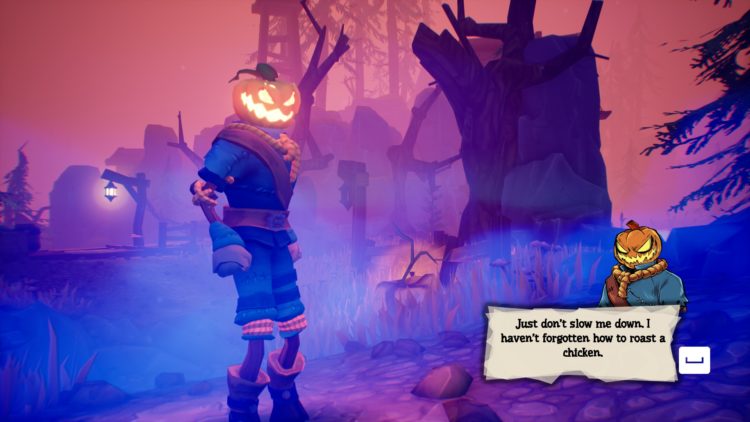 All along the watchtower

The majority of Pumpkin Jack concerns our titular hero attempting to track down the wizard. At first, he can do nothing but jump and dodge, but it doesn’t take long for him to find a shovel to use as a weapon. There are six weapons in the game, with a new one becoming available in each subsequent level. Aside from jumping, all Jack can do is use these weapons, which he can switch between as part of a weapon wheel, and send a crow off to do a small amount of damage or lower a bridge. None of the weapons are better than the others, although they aren’t exactly interchangeable. Two of them are ranged weapons, and you can only use them to hit foes nearby. My favorite is definitely the blunderbuss, as it has a wider range than the other ranged weapon while also just being fun to use.

The platforming in Pumpkin Jack is about as basic as it can get. He jumps on things that are often suspended above water. If he falls in the water, he dies and goes back to one of the game’s regular checkpoints. The jumping doesn’t feel particularly weighty or precise, but it’s competently executed, much like every other aspect of the game. Jack can double-jump as well, and it’s generally easy to hit your mark. The levels mostly look very similar, with a lot of repeated assets, but they also have variable gameplay sections that are unique to specific levels. For instance, one level has you riding minecarts and jumping over busted rails while making sure to lean in the right direction. Another has Jack riding a horse through a spooky swamp. They’re similar to each other but different enough that I looked forward to seeing the next one.

Each level also has sections where Jack takes his head off and plays a mini-game that, much like the segments I mentioned in the last paragraph, is always different in every level. These are often very basic, such as one where you have to play a matching game with headstones or a Simon Says kind of minigame. All of these parts really help break up the pace while keeping things fresh. There are also occasional sections where you have to ride a series of boats while fighting off hordes of enemies which are pretty neat. However, everything is shallow. There’s never any depth to be found in any of the gameplay mechanics, which also extends to combat. 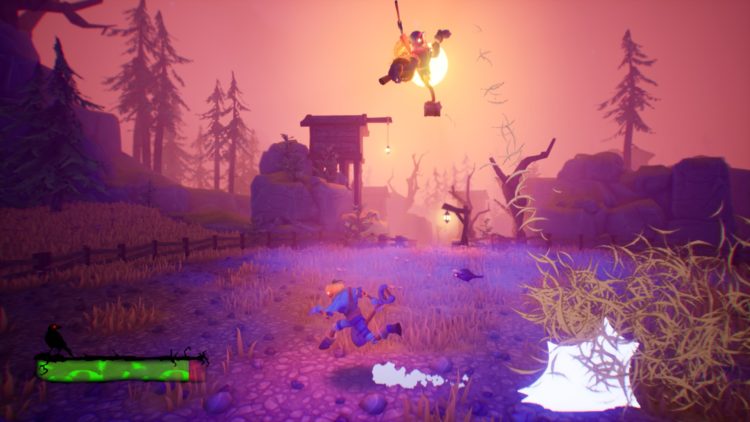 There’s not much to say about the combat in Pumpkin Jack. You equip a weapon and then mash the attack button until the thing in front of you dies. Jack can also dodge out of the way and use a special air attack after double jumping. Enemies are mostly skeletons, although you’ll also fight some humans and other types. Much like the rest of the game, combat is generally never much of a challenge. You can’t lock-on to anything, but it isn’t exactly necessary. Walk up to them, hit them, dodge when they go to attack, and then keep hitting them. If you need to heal, you can break items in the levels and collect green healing orbs.

At the end of each level, you have to fight the boss. These are similar in that you’ll typically wait around until you can use a gimmick to hurt the boss as opposed to fighting them like a normal enemy. Once again, though, there’s a lot of variety. One boss has you avoiding a giant and then leading it toward a trap, which you blow up. Another sees you avoiding attacks while on walkways that keep breaking before hitting bombs at the boss to damage it. They’re all easy and won’t take more than one or two tries. Dying in Pumpkin Jack isn’t a common occurrence, although some of the one-hit kills will catch you off guard some of the time. Each time you die, the game mocks you with a running tally of your deaths, which I thought was strange for a title that’s so light on challenge.

After just six of those levels, the game is over. I don’t have anything overly negative or positive to say about Pumpkin Jack. It’s well-made and moderately entertaining. There’s nothing special about it, though. The tone and characters are generic, the gameplay is derivative and shallow, and it’s quite short without much replay value to speak of. But if you’re looking for a Halloween-style platformer to play through, you could certainly do a lot worse. Just don’t expect to find anything particularly compelling or offensive.

Pumpkin Jack is a competent Halloween platformer that's too generic, shallow, and short to make it a must-play.