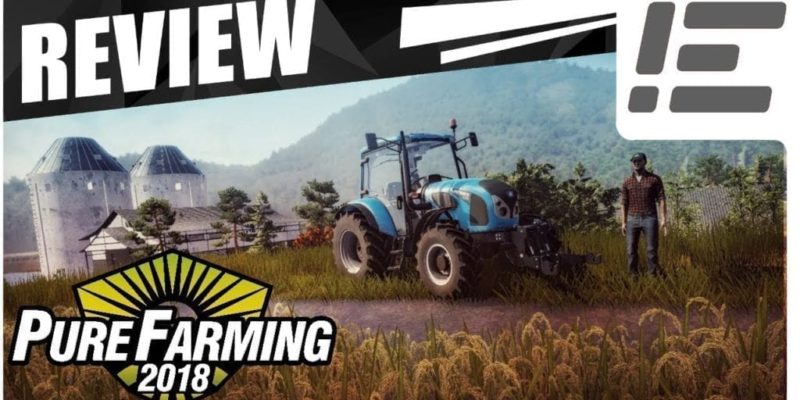 Disclaimer: A Steam code was provided by the developer/publisher for review purposes on PC.

Back in 2008, GIANTS Software released the first entry in the now long-running Farming Simulator series. Ever since, the farming-sim sub-genre has completely blown up in popularity, thus inspiring a lot of other studios to take a crack at this design concept. That’s exactly what the team at Ice Flames has done here with Pure Farming 2018—it’s a near total replica of Farming Simulator’s core mechanics. This same description can be applied to quite a number of other titles in the sub-genre, but the difference here is that Pure Farming 2018 just might be good enough to take on the champion.

I’ve put over 137 hours into Farming Simulator 17 on PC, so when I first started playing Pure Farming 2018, I immediately noticed the similarities. The formula between the two is pretty much identical; if you’ve played one, you’ve played the other. But, what makes Pure Farming 2018 special is that it does add some notable improvements to the formula.

For one, the driving mechanics are really good. You can feel the weight of each vehicle, as well as the various tools you use (plows, cultivators, seeders, etc.) When you attach a grain trailer to your tractor, you’ll be able to feel the weight difference, but that difference becomes even more obvious after you actually fill that trailer with grain from your harvest. In FS17, it’s totally possible for you to take a tractor and trailer, drive up an incline and jump off of it like a stunt scene out of an action movie. I was very happy to see that is not the case here in Pure Farming. On top of the authentic-feeling weight distribution system, vehicles also react realistically to changes in the terrain; you can see the subtle bumps in off-road paths as the suspension of each wheel individually reacts.

The driving mechanics feel genuinely realistic, which is very important for a game like this.

When it comes to the actual farming experience, again it’s very similar to that of Farming Simulator, but that’s a good thing. Seeding, fertilizing, plowing, cultivating, harvesting—it all feels comfortably familiar. But, Pure Farming manages to spice things up with a more informative UI and realistic tweaks to the gameplay mechanics.

There are little menus with progress bars dotted all over the screen, giving you the exact info you need on the field you’re working on. Even the mini-map updates in real-time to reflect the changes to each field as you perform various tasks. There’s even a drone which you can activate at any time to give you a bird’s-eye view of the entire map and statistics on each of your fields. It’s an unnecessary feature, but such an awesome thing to have. The drone also provides a cool way to keep track of any AI workers that you hire, which you can have a total of five of at a time.

Another strong point of Pure Farming 2018 is its diversity. While the mechanics may feel similar to that of Farming Simulator, the experience is enhanced by the each of the highly-detailed maps which span across real-world locales dotted across the globe: Montana (USA), Japan, Columbia, Italy, and Germany. Each of these maps look different from each other and offer their own unique atmosphere. For instance, you can build a wine empire with the fresh Sicilian grapes in Italy, become the emperor of rice in Japan, or a coffee connoisseur in Columbia. The choice is up to you. Speaking of choice, that’s what Pure Farming 2018’s campaign mode is all about.

The diversity in the landscapes is quite nice.

Called ‘My First Farm’, this campaign mode is one of the three main game modes. My First Farm puts you in the shoes of a young farmer who’s inherited the debt-ridden farm of their late grandfather. Your goal is to return the farm to profitability with your own ideas. Initially, there’s a lot of hand-holding, but that’s a good thing. There are so many different mechanics, so it’s great the game gradually introduces you all to them before letting you go off on your own and do as you please. There are even RPG elements, with there being an XP system and side missions for you to complete. I especially liked having side missions, as they give you something to do while your own crops are growing. They also happen to be a little more profitable than doing your own farming, so it’s a great way to stack up some cash fast. The only downside is that all of the side-missions require you to use your own equipment, unlike in Farming Simulator where the side-missions give you loaner machinery.

In addition to the campaign mode, there’s also a ‘Farming Challenges’ mode. This mode offers several challenges spread across each of the aforementioned maps, putting you in different scenarios. One challenge may have you harvesting fields, while another has you taking tractors and trucks to a workshop. This mode offers players a great way to try out various aspects of the game without investing too much time into the main content. Of course, there’s also a ‘Free Play’ mode which allows you to do as you please on whatever map you choose. The only limitation you have, unsurprisingly, is limited funds.

Due to a lot of amateur studios, the simulator genre has garnered a reputation for consisting primarily of incredibly basic-looking and terribly-constructed games. We’ve already established that Pure Farming 2018 plays very nicely, but, it also looks pretty good. Every map is highly detailed; the landscapes are beautiful, the architecture of the buildings is very complex, and the icing on the cake is the incredible level of detail that’s been put into every piece of machinery. Iceflames even went as far as to let you see the stitching in the seats of each vehicle, that’s how detailed these models are. All of this is complemented by beautiful visual effects, such as a very realistic lighting system, particles everywhere, and even wind simulation which is demonstrated by the trees swaying in the breeze, especially during a storm. Speaking of storms, not only does Pure Farming have a dynamic weather system, but conditions actually affect your crops. Prolonged periods of little-to-no rainfall will dry out your fields, thus requiring you to water the soil yourself. It’s a shame the rain doesn’t also wash the dirt off your machinery, but at least there’s a pressure washer you can use to do that yourself.

On top of the visuals looking great, the sound design is also quite nice. Each machine has a very rich sound in both interior and exterior views. The soundtrack is also very pleasant to listen to. Like in FS, there’s an in-game radio that can be turned on or off at any time. You can also add your own music and Internet radio stations to diversify your work tunes.

The best way to summarize my experience with Pure Farming 2018 would be that it’s pretty much the same as Farming Simulator, just with a few differences to shake things up. I love the UI, physics, gameplay mechanics and presentation; you can tell that Ice Flames really worked hard to refine these important aspects of the game. There are a few quirks, such as not being able to lease any vehicles, and there also isn’t a true 24-hour day/night cycle (one in-game minute is 5 real-world seconds), just to name a few. But, these few cons are things that can be tweaked with updates in due time. I’m looking forward to seeing how Pure Farming 2018 expands as time goes on. It includes mod support, so I’m particularly excited to see what modders end up adding to the game.

But, of course, there’s still the big question: should you buy this or Farming Simulator? It’s hard to say. Farming Simulator has the benefit of being an established brand. It’s modding community is quite large and very active, and the next big entry in the series is set to launch later this year: Farming Simulator 19. Even so, I think Pure Farming 2018 is one of the few alternatives that truly rival FS. I think I can see myself sticking with the ‘new kid on the block’ for the time being. FS19 is really going to have to wow me to cross back over.

By Andrew Farrell42 mins ago
Reviews

By Logan Broadley24 hours ago
Reviews