It was 20 years ago this week that Quake was unleashed by id changing the way gamers looked at gaming forever. It was probably one of the first games to encourage competitive gaming during a time when the Internet was still in its infancy.

In the mid to late nineties, a competitive gaming scene in the UK was born, it was called the UKCL (UK Clan League), and each week Quake enthusiasts would duke it out in multiple divisions over a season. It was highly competitive and helped bring fame to some of the top players and clans in the UK. This was only possible because of Quake and its fantastic competitive gameplay. 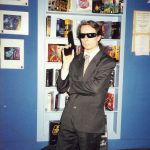 I have extremely fond memories of the UK Quake scene. It was competitive and the community was fantastic. It was also extremely well coordinated by the UKCL administrators, and through a site run by Strange Company’s Hugh Hancock called News from the Front, everyone could get the information they needed to plan and prepare for matches.

Matches would take place at the weekend, usually Saturday, and the priority was to get a solid team of five together and play on a pre-determined map against another team in the same league with games lasting around thirty minutes. 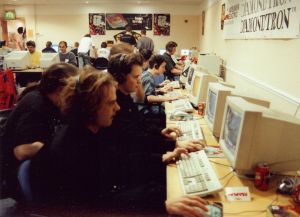 Not the office typing pool. This was competitive gaming.

Back then there was no high speed internet, most of us were on 28K modems but there were a few lucky players who managed to play over ISDN and get those sub 100 ping times. At the time, I was running a gaming cafe called Reality-X in Edinburgh which had a 64K leased line and every week there was a battle to decide who in the team would get to play out of the cafe. We usually tried to get our best two players to play on this leased line which was always Razza and Strider. They were by far the best two players in the Reality-X clan, the rest of us were quite mediocre but these guys had lightning reactions and amazing skills. The masters of Quake were the mighty Quake Lords, they dominated the UKCL for quite some time. Simply amazing players. 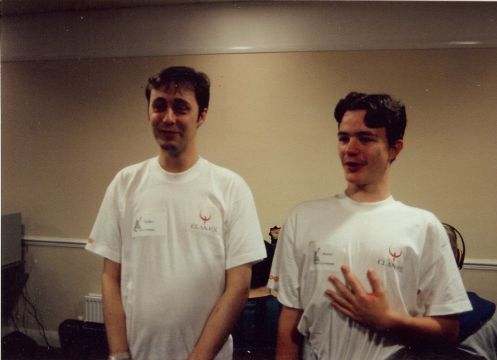 Razza and Strider. These guys kept the frags coming.

Skill was what Quake was all about, knowing where the opposition were on the map without actually seeing them. Listening for audio cues such as the red armour being picked up, someone going through the teleport etc. The real pros could listen for one of these sounds  and fire a rocket at the location the enemy would appear so as they did they were greeted with a rocket in the face. 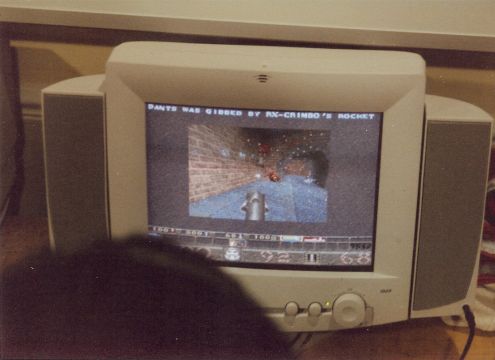 Look at that res! Screen reduced to increase FPS. 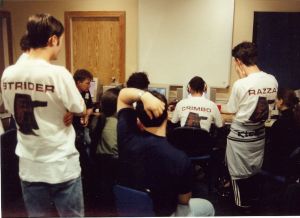 Forget Twitch. This was how spectators watched Quake.

One particularly satisfying encounter to enjoy was another clan member, Crimbo, firing the rocket at the enemy’s feet propelling him into the air, quickly changing the lighting gun and zapping him as the player flew through the air.  It was quite fantastic to watch.

It’s safe to say that the UK Quake scene helped spawn the LAN party scene in the UK, and as it became more competitive, I started organising LAN events in the UK, the largest being Fusion which was held in Leeds for around 400 gamers. Quake was driving competitive play all over Europe too and we flew in some of the top clans from around Europe to take on some of the best UK players. It was a great event and it was around this time it was apparent that eSports was slowly but surely becoming a thing. 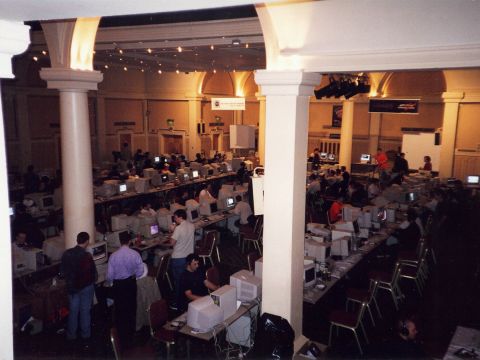 In the nineties, the web was still very young but there were sites such as Stomped, Planet Quake, and of course Blues News, which is still running today, that helped push the Quake scene. These websites helped spread the word about Quake with all the latest news on everything from game updates to modding and skinning the characters. Let’s also not forget the Quake movies which spawned the Machinima scene. 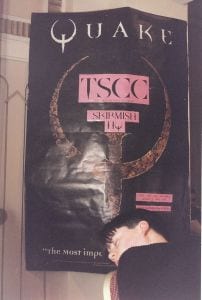 Everything was done on a budget back then.

Older gamers will remember Thresh (Dennis Fong) who won John Carmack’s red Ferrari in the Red Annihilation tournament, it was a big deal at the time because gamers realised they could actually win something of value by being great at a game. That was back in 1997 and Fong is listed in the Guinness Book of Records as the world’s first pro gamer.

So as you can see, Quake was a very important game which has helped shape gaming as we know it today. Without Quake it might have taken a lot longer for pro gaming to take off. Every gamer should be thankful that id created such a fantastic multiplayer shooter that was moddable, accessible and incredibly exciting to play no matter how skilled you were.

Fallout 4 patch 1.5.4 live on PC ahead of schedule

Mafia 3 shows off its pre-order bonuses in video

By Kevin Carignan2 hours ago
Features