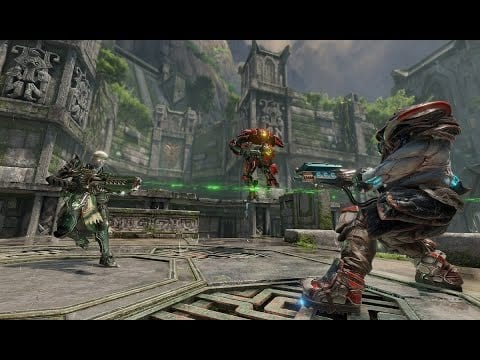 There’s a bit of stuff emerging from QuakeCon today, including this first bit of in-game footage from Quake Champions. It looks plenty quick, though not being a die-hard Quake aficionado I can’t really make a direct comparison to the older games.

The arena-style FPS was first announced at E3, where there was a pretty strong emphasis on woo-ing the PC crowd with talk of uncapped frame-rates and 120hz support and the like. In a move away from the original Quake titles (and towards more contemporary releases), Quake Champions has a cast of playable characters with unique abilities. These include four named Ranger, Visor, Nyx and Scale Bearer.

It has already been revealed that Ranger, for example, has a ‘Dire Orb’ ability, allowing him to lob the object and then teleport to that point in space. Visor, meanwhile, can basically see through walls.

In addition to releasing this trailer, Bethesda announced at QuakeCon that Quake Champions will enter beta in 2017.