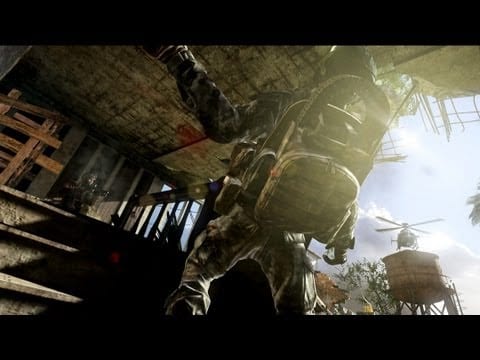 See? Women can be frosty-eyed killers too.

So yes, earlier today there was a bit of a live event featuring Call of Duty: Ghosts’ multiplayer portion. It’s apparently quite a popular series, so we’d better give it some coverage. Here’s the big news: your soldier can be a lady now. As well as your head gear and uniform, you can change your face and gender and I guess your sexuality too although that last one will be known only to yourself.

Activision says it has quite literally tens of thousands of customisations planned, so if you’re in the Ghosts demographic expect those to be aggressively and unpleasantly marketed at you in the near future.

It’s not pretty dress-up dollies though. There are also a pair of new game modes; “Search and Rescue” (it’s like Search and Destroy but with added dogtag collection) and “Cranked” (which I suppose is like Crank but with less Jason Statham and more having to periodically kill people to stay in the match.)

What else? Oh yes, you can spend $200 USD on a ‘Prestige’ edition of the game if you like. It comes with a Season Pass (obviously,) Freefall pre-order bonus map, soundtrack, insignia set and, for some reason, a “1080p HD tactical camera.” There’s a $120 ‘Hardened’ edition too, which has all that but no camera.

Call of Duty: Ghosts will be released on PC in November.

Ok! Now it’s time for Eminem to shout at you.