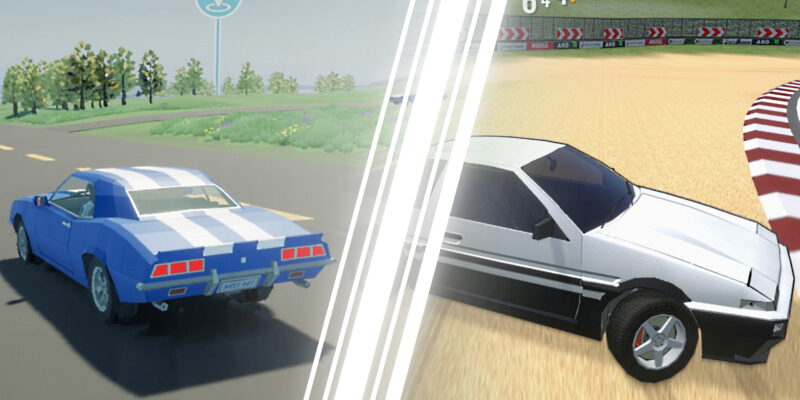 The Fall Steam Next Fest has come and gone. I honestly nearly missed it, had it not been for our editor-in-chief pointing out. Upon discovering the treasure trove of demos, I scrambled to download over a dozen of them and spent the course of two days sampling each one. Much like my experience with this year’s summertime Next Fest, I’m walking away from this one with a rotund wishlist and childlike eagerness to see more demos crop up, because the selection here was nothing short of ace.

I tried out nine great racing game demos in this Fall lineup from the Steam Next Fest. While I can’t say there’s one that massively stands out, this selection covers a variety of sub-genres, meaning that there’s something coming for basically every kind of racing fan. If sims are more your speed, we also have a list for that.

Classic Sport Driving immediately grabbed my attention due to its strong resemblance to Horizon Chase Turbo. Much like the latter title, Classic Sport Driving harkens back to the early age of retro racing, when pseudo-3D techniques were used in lieu of fully polygonal rendering. That said, this title is full 3D, right down to its car models and environments. Even though it does bear a striking resemblance to Horizon Chase Turbo’s retro mimicry art style, CSD is not nearly as vibrant or charismatic. 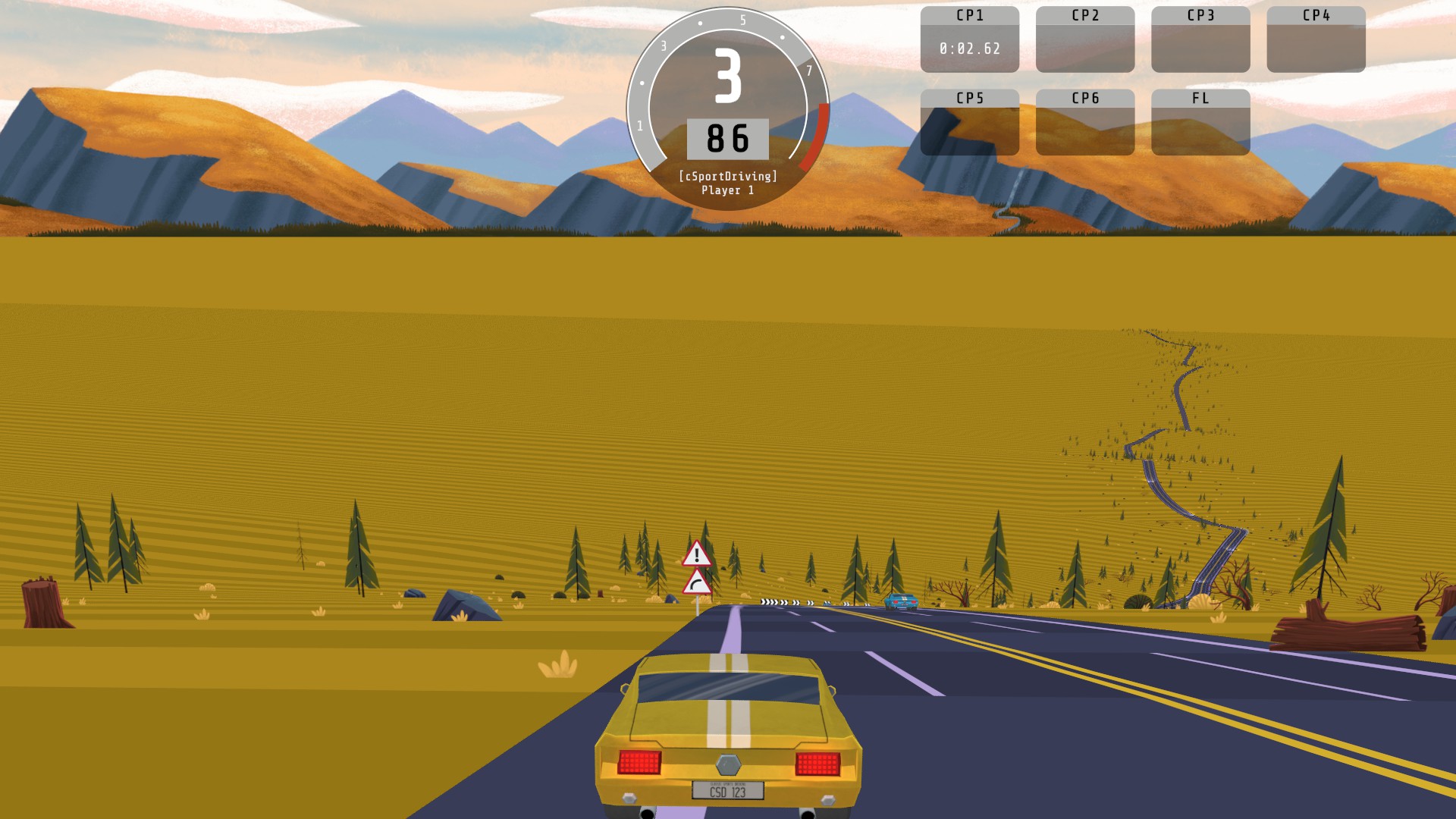 The same wheelspin is found in its gameplay elements. Classic Sport Driving does contain a unique track selection system, which features the player generating a unique track by typing in any series of characters. While this does mean that the game has thousands and thousands of possible track combinations, the selection in the demo was extremely limited. The actual gameplay wasn’t so bad, however. Controls feel tight and responsive. However, the three difficulty levels result in a very different experience. “Easy, Medium, and Hard” are very literal here, as the Hard mode outfits every track with serpentine curves. There’s no drift mechanic whatsoever and the driving physics don’t seem to facilitate smooth cornering otherwise. There’s certainly a lot of potential here, but this was the odd demo that didn’t “wow” me, but did at least intrigue me.

Odd name aside, First Racer drew me in thanks to its cel-shaded artstyle alone. I’ve always had a strange love for cel-shaded racers, and this one continues that trend of sleek models and environments. But, of course, its the driving mechanics which are the most important. Thankfully, First Racer walks the “simcade” line with confidence and flair. 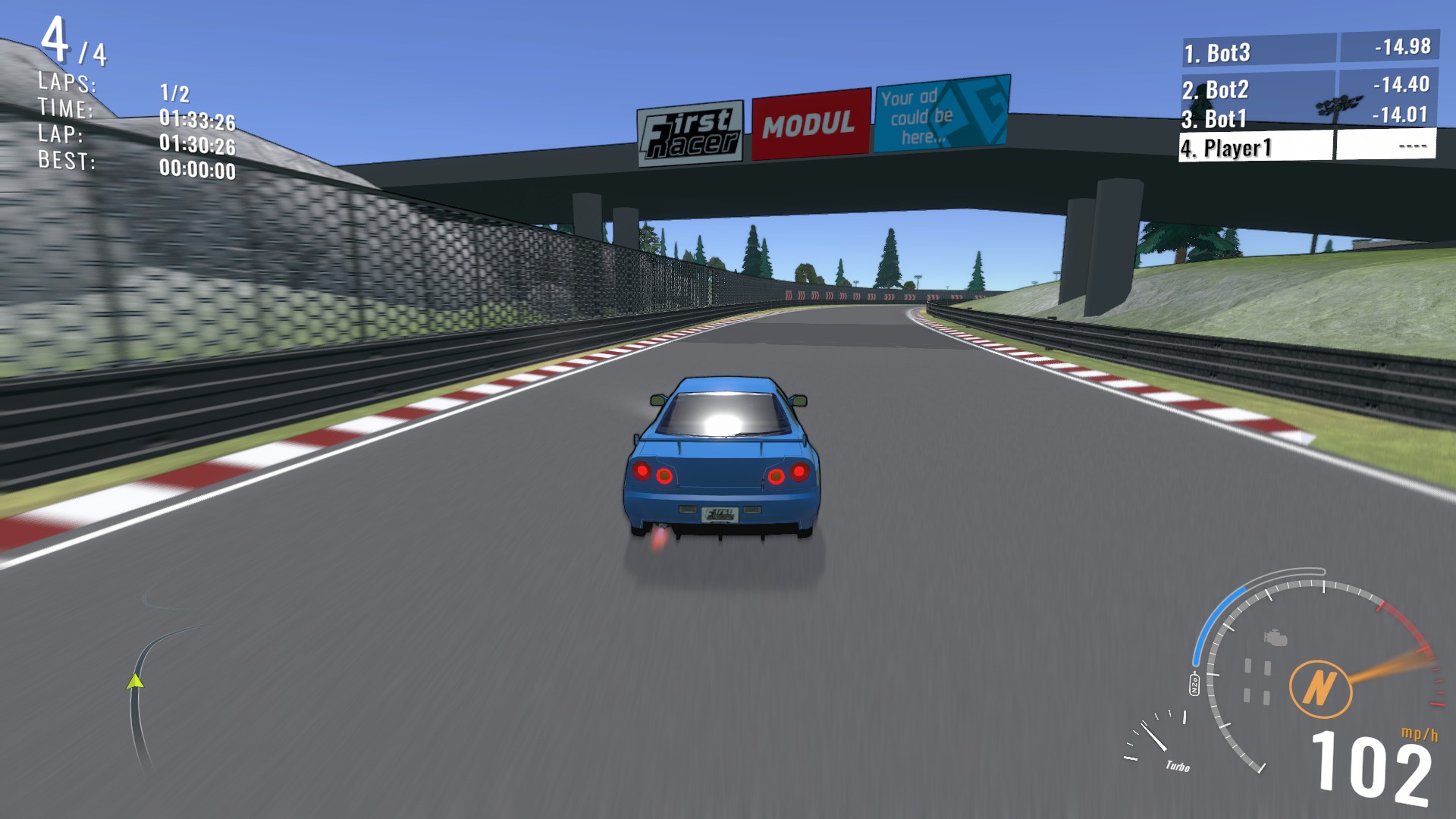 First Racer seems to be a full-on love letter to JDM culture, as the demo cars are based completely on two Japanese racing legends: the Nissan Skyline and Toyota AE86. While they go by fake names here, the resemblance is maybe only a fender away from being copyrighted. Nevertheless, First Racer feels as slick as it looks with solid physics and great drifting mechanics. Only circuit racing and circuit drifting were featured in the demo, but here’s hoping some tracks based on the impressive road network of Japan are also included. The damage physics are also in full effect here; something that bigtime racers like Forza often shy away from. However, weight distribution definitely deserves some fine-tuning as even simple collisions send the cars flying like toys.

Futuristic racers have seen a bit of a resurgence in the last few years. With the official absence of their primary source of inspiration, F-Zero, indie devs in particular have really tried to capture the essence of what that classic franchise left behind. Galaxy’s Extreme is one such racer that isn’t at all shy about showing its roots. 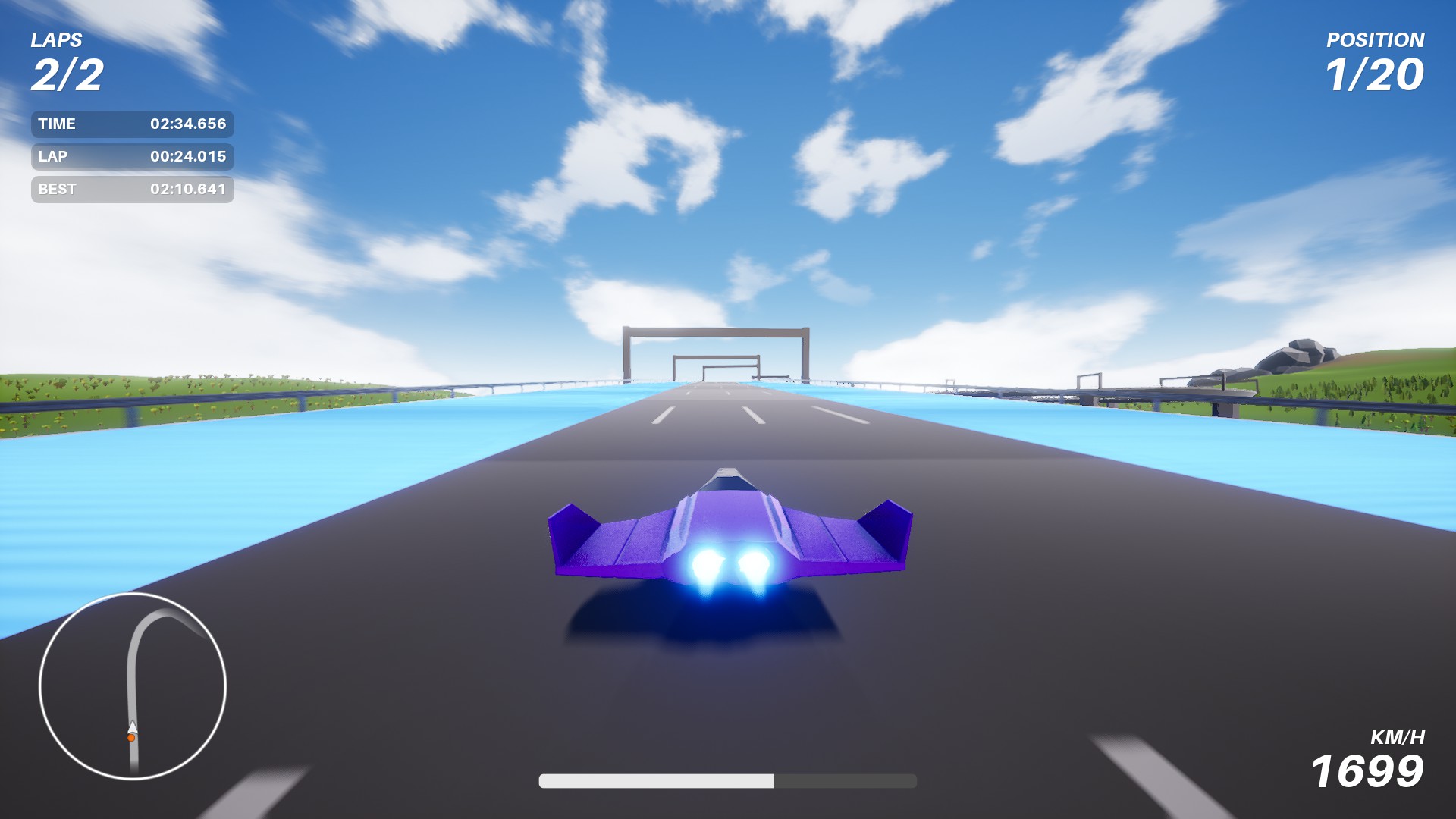 This clone looks and feels like a modernized F-Zero experience, right down to its blistering speeds and wild track design. Yet, these two factors seem to have a hard time complimenting each other. Either that or I’m just not good enough yet. I found it a little difficult to properly control my vehicle, especially when boosting. But, when I got into the rhythm of it all, it felt extremely satisfying to punch the throttle and zoom ahead of the pack. This title has already entered the Early Access phase of its development, so interested folks can already jump in. In its current phase, I didn’t find Galaxy’s Extreme to be as polished as other futuristic racers like FAST, but it certainly has the potential to advance as it gets updated throughout its time as an Early Access title.

This is easily the most unconventional “racer” in this list, but it certainly fits the bill for being a true speedster. Hypergliders features you controlling a falling character that has no problem with hurtling through the air at breakneck speeds. As you fall in style, you’re awarded for bulleting inches away from the terrain of the procedurally generated floating islands. These islands have a lot of holes, cracks and crevices that you can squeeze your character through to rack up even more points, and they’ll certainly keep the adrenaline running too. 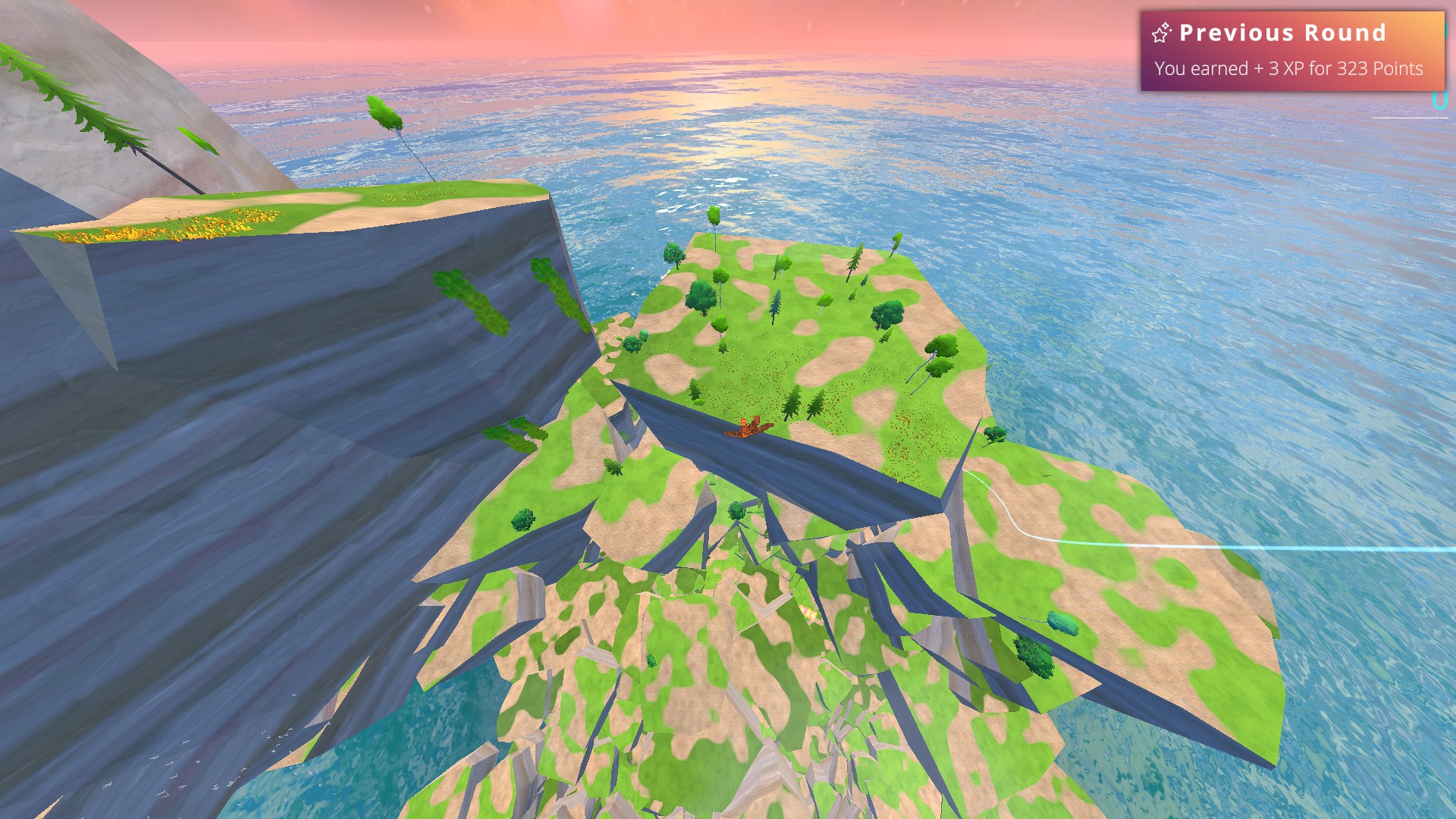 In addition to close proximity flying, Hypergliders also invites players to collect artifacts and gems that are hidden away around the islands, and passing close enough will allow you to grab them. Thus, flying fast, close to the ground, and nabbing the extra goodies results in big point gains, which means a high spot on the leaderboards. Hypergliders may not be a regular racer, but it’s certainly one of those titles that fits the bill of dumb fun, and may just very well catch on in streaming circles.

All it took was me glancing at Motor Town’s Steam page for me to think: “I want this!” Playing the demo only sealed the deal for me. It sells itself as a “CARPG,” though, it’s not as dedicated to purely cars and racing as Forza Horizon, for example. By that, I mean that Motor Town puts you “behind the wheel” of a variety of different vehicles including sports cars, pickup trucks, go-karts, buses, utility vehicles, and more. Not only can you race, but you can also pickup and drop-off citizens, deliver cargo, and more. 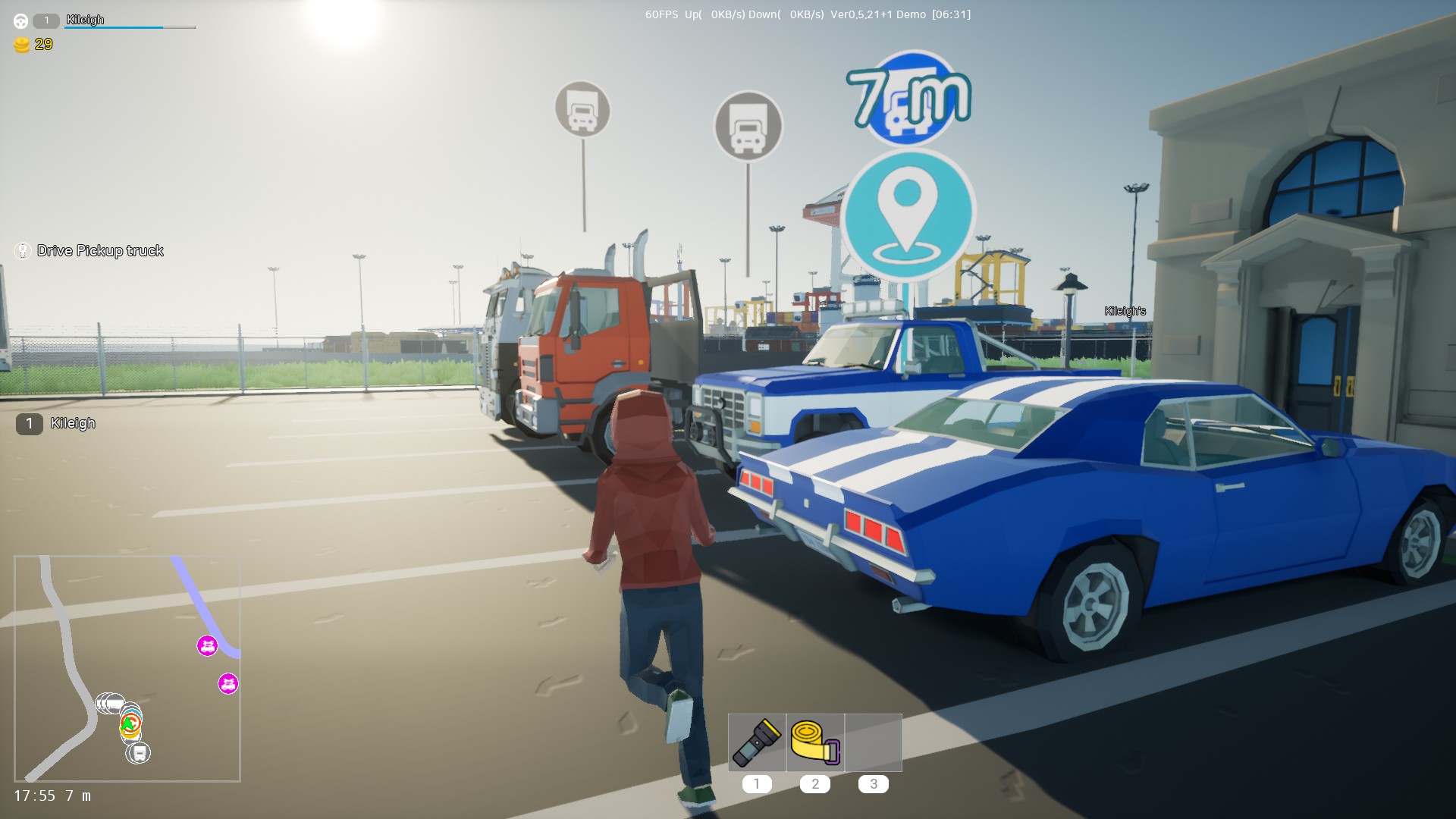 As you drive more vehicles, your driving level increases, thus granting you access to even more vehicles. These vehicles can also be upgraded and customized, and they need to be maintained (such as refueling and minding the temperature gauge). But, one real standout feature is the ability to hop out of a vehicle at any time and explore the open world map on foot. Clearly, there’s a lot going on here, and it’s great. I think, out of every other title on the list, I look forward to trying the full version of this the most. Not because it’s necessarily “the best,” but simply because I love the concept. Not to mention its beautiful low-poly visuals. Hopefully, its multiplayer lobbies stay active for those very reasons.

There was a surprising number of rally-focused titles in this Next Fest, which is the category that RaceLeague slots right into. Like what I’ve said about other titles on this list, RaceLeague’s controls feel very tight and responsive, especially when it comes to pulling off drifts. Its driving model arguably seems to lean more on the sim-side of things, though it’s still accessible to beginners. 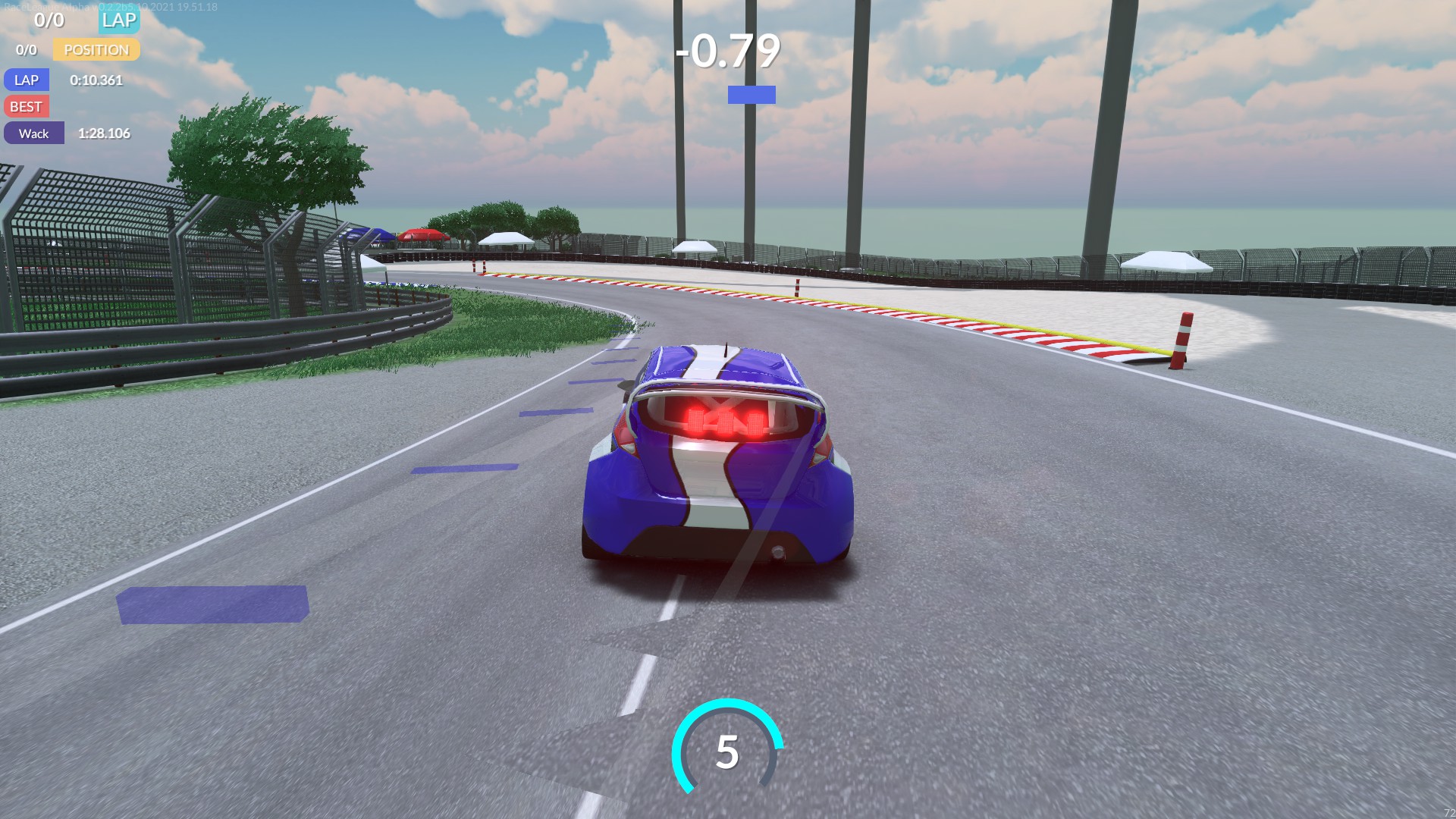 Similar to that of First Racer, RaceLeague features a very authentic damage model. The car chassis’ get bent, bumped, and crunched, and there are some interactive trackside props like tire barriers that go flying in all directions when impacted. These aren’t necessary features, but certainly do add to the game’s visual flair. RaceLeague also sports a track builder, which I literally only dabbled in for a minute or two. I needed to come out of it to do something else and was never able to recover my track, nor spawn new elements on a fresh layout. I guess that was just an odd bug. Nevertheless, it does seem to be a lot more comprehensive and complex than a typical track editor, which should keep hardcore builders happy.

Water-based racers are probably one of the least frequented sub-genres out there, so seeing a new one like Riding Seas bubble up was quite surprising to me. Yet, its rarity is exactly what intrigued me to try out its demo, and I’m glad I did. Riding Seas is a full-on arcade racer, featuring a variety of cartoony vessels to pilot and equally charismatic courses to conquer. It definitely doesn’t seem to lean too hard past arcade territory, as the driving/sailing model doesn’t really have that much realism to it. The boats seem to skim across the water with ease, almost to the point of being a little too slippery. 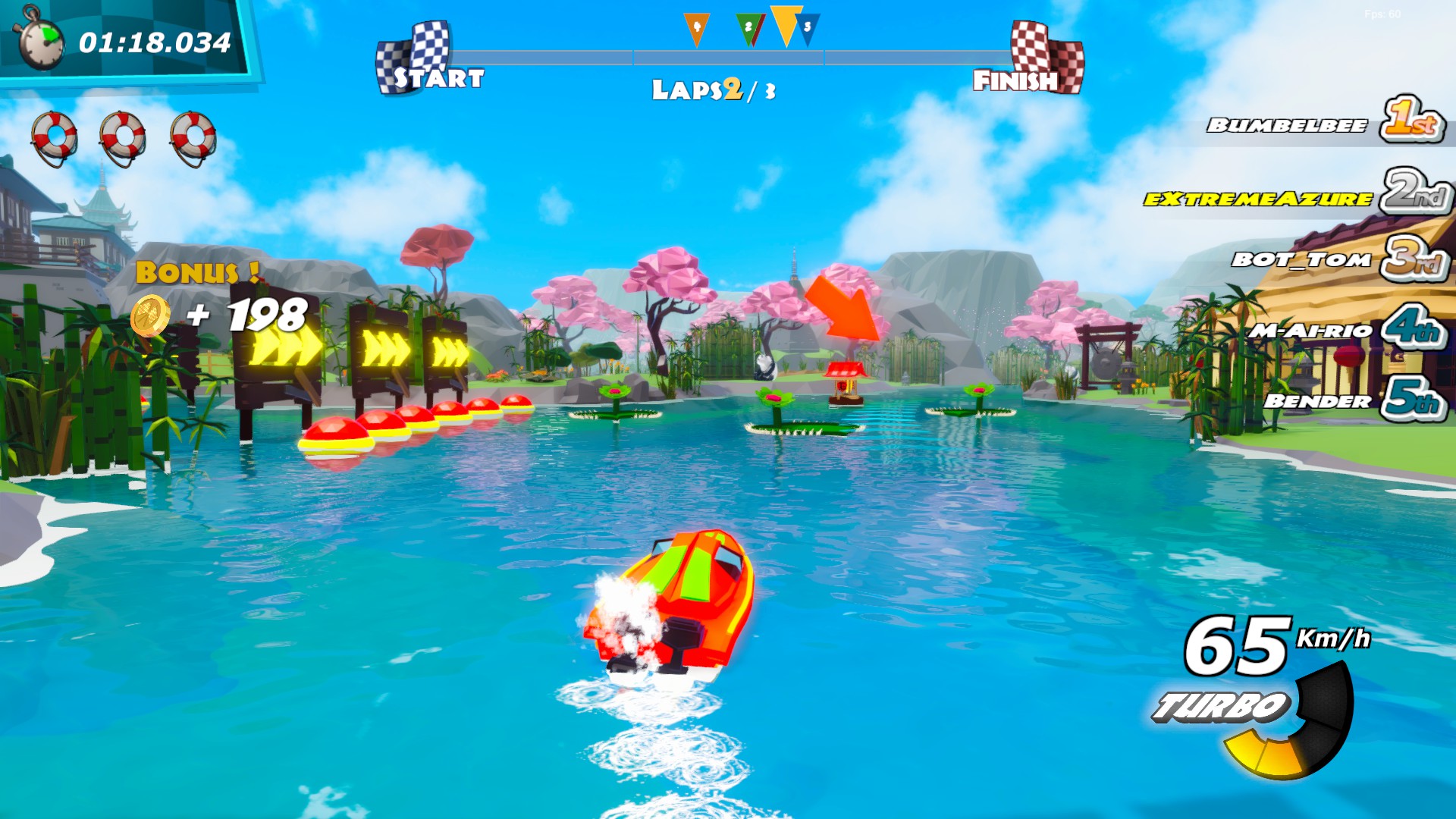 Nevertheless, there’s still a lot of charm here. Riding Seas does feature a chain-based drift/boost system where a short drift will result in a small boost forward, whereas a longer drift will end by sending the boat flying forward. Connecting multiple drift-boosts in a chain feels very satisfying. On top of that, the boats can jump and dive to avoid obstacles, which is a cool use of the water elements. For its unique concept alone, Riding Seas is worth checking out.

Isometric racers are not often on my radar, but RXC did a great job at swinging me over. Especially for a title in this perspective, the handling and physics feel very authentic; there doesn’t seem to be that much arcade influence going on, if at all. While driving with a top-down view is still a little odd for me to fully wrap my brain around, once I nailed the controls, I was able to handle corners and straights fairly well. 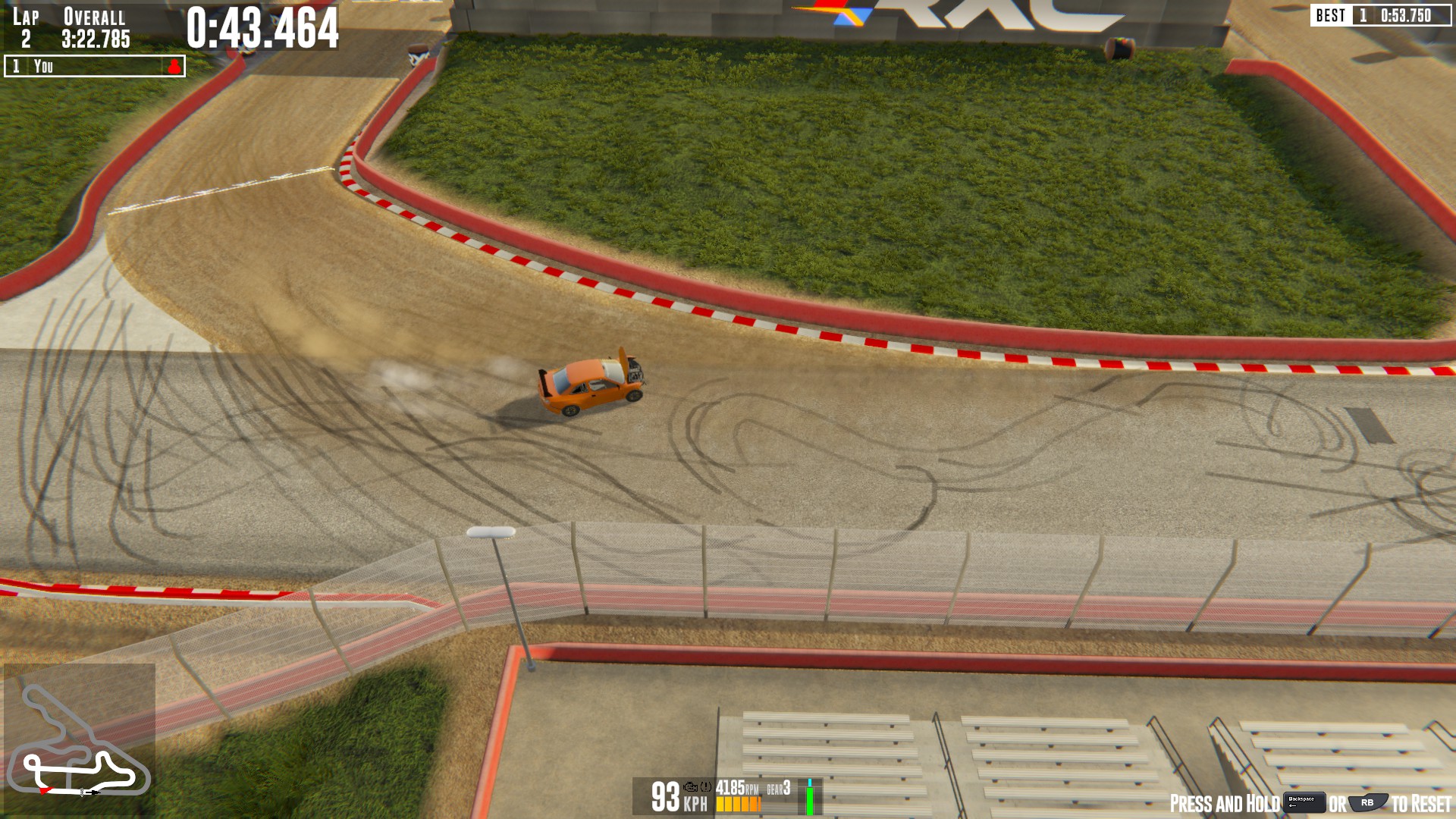 RXC is yet another title here that doesn’t shy away from having a very detailed damage model. It seems like not working with licensed vehicles comes with such perks. Either way, it certainly didn’t take long for me to see that this little indie has a lot going for it, and I’m excited to see how it progresses.

Yet another rally-focused racer, and arguably the most unique one of them all. While the aforementioned Classic Sport Driving flirts with its retro inspiration, Victory Heat Rally Shakedown goes all out by embracing a full-on flat pixel artstyle, but having it all wrapped around a Z-axis.  The faux-3D environments are bright and colorful, as well as the pseudo-3D vehicles being richly animated. Not to mention the high-octane visual effects just make the whole presentation basically scream at you, in a good way. 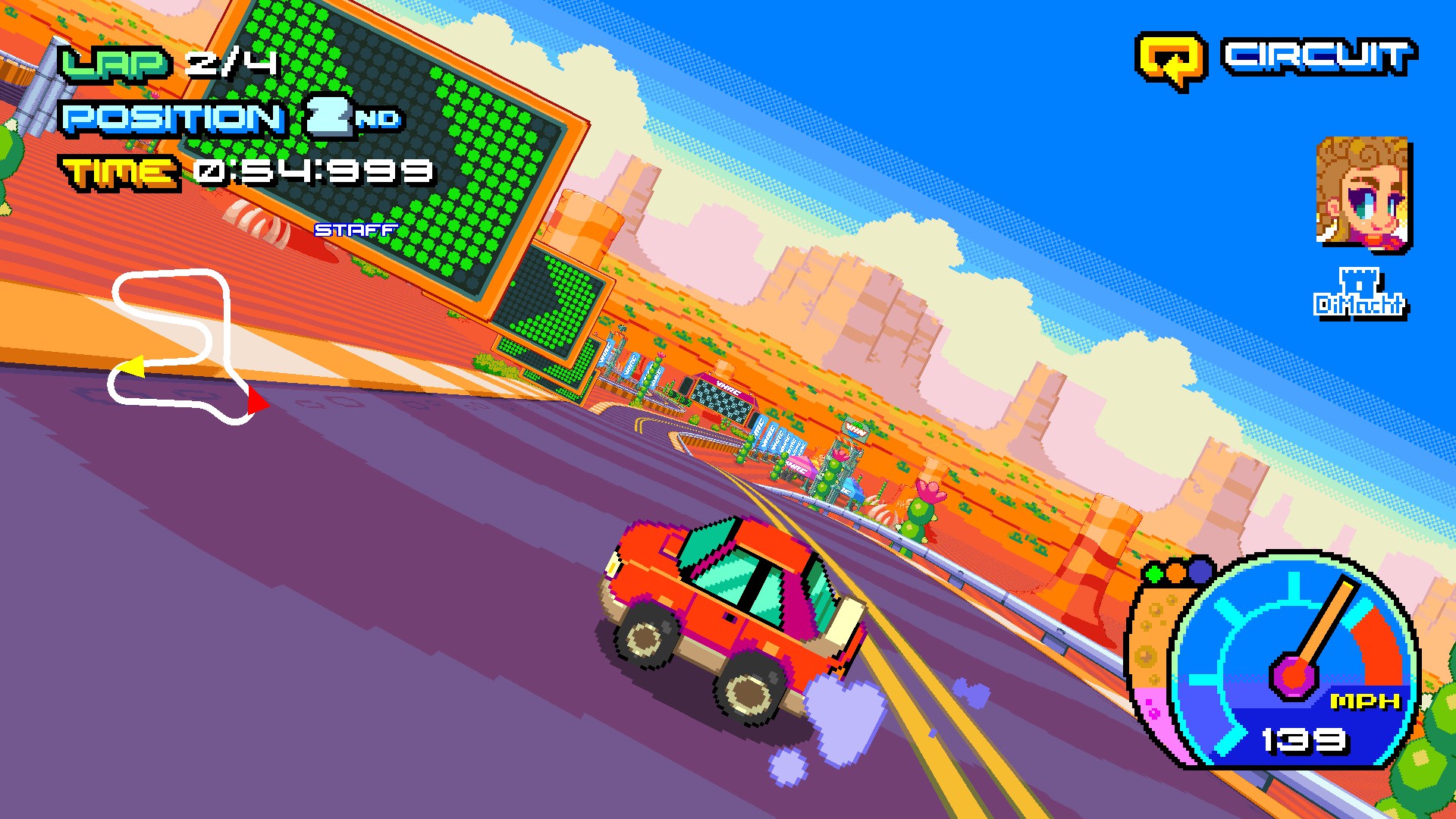 For these elements alone, Victory Heat takes the cake for being the most creative of this whole bunch. The icing on the cake is that its gameplay feels fluid and fun. Drifting is tight and the sense of speed with the chain-boost system is cranked up to level 11. Any arcade racing player is bound to appreciate this project, but retro fans will undoubtedly feel a rush with its presentation alone.

All of these racing game demos from this year’s Fall Steam Next Fest are looking top-tier. Even though some in this list overlap in terms of genre, they each have their own unique look and feel that makes them individually interesting. The small studios involved deserve a pat on the back, especially if the full releases live up to the potential shown in these demos.