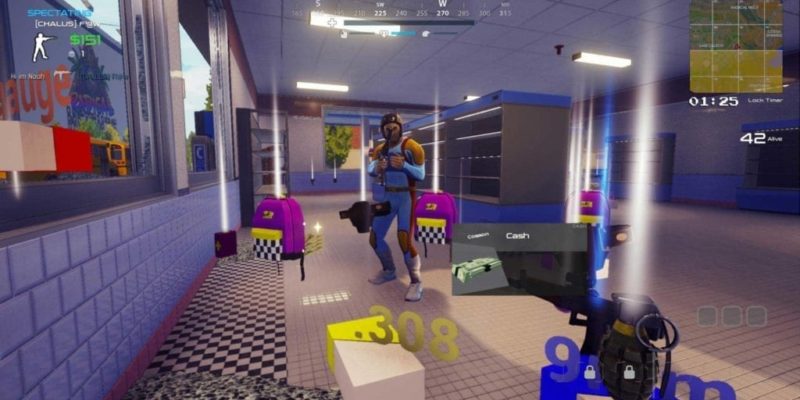 This afternoon Boss Key Productions released their battle royale title Radical Heights. Announced only yesterday, I decided to jump in and see if they have managed to piece something together after only five months of development that will entice battle royale gamers. It is in Early Access so I expected this to be fairly rough around the edges and it is.

In an effort differentiate Radical Heights from other battle royale games, Boss Key has made some changes to the formula. First up, there is no decreasing circle. Like Darwin Project, the map is split into zones. At the start of the game players freefall into the map as expected but some zones are blocked from the start that will eventually open up. This probably to keep players a little more concentrated at the start away fromt the centre because the map is reasonably large. Over time the zones will start to lock off and which zones are closed are indicated with a colour coding. Red is off limits and yellow indicates you should start thinking about getting out the zone. 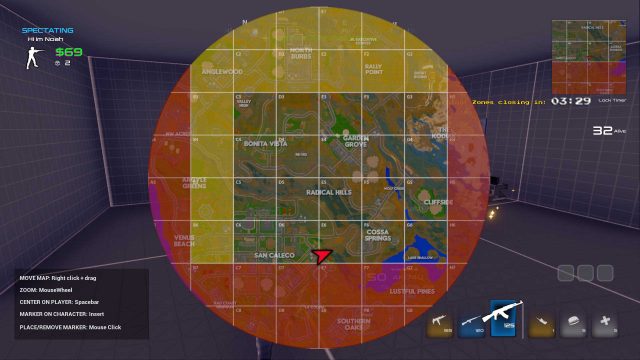 The map and its red and yellow zones

Radical Heights is based on a game show concept so it’s all about the money and without hard cash you’re completely useless. When you drop into the map you have nothing at all, you need to find money fast so you can equip up. Weapons and armor can be purchased from Top Gunz vending machines which are dotted all over the place both inside and outside buildings.  Other items to watch out for health-giving items such as bandages and burgers. There are also prize boxes which contain everything from weapons to cash but these take a little longer to open. Any item has a value and can also be traded in for money which in turn can be used for purchasing better stuff in-game or used in the cosmetics prize room outside of the game. It works on a cash for items system and that is a little different. 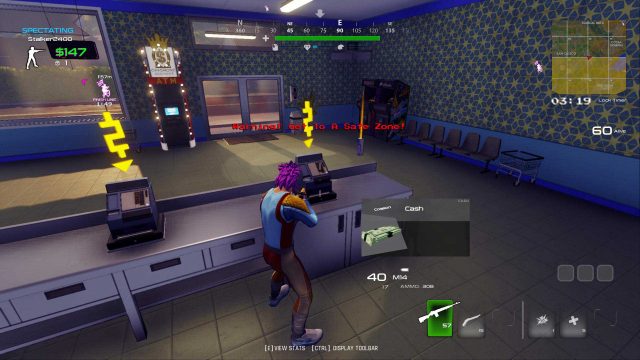 Without a weapon you’re at a severe disadvantage although at the start you can punch someone to death as I discovered when taking out some poor sap trying to gear up.  I was also punched to death by one guy while firing an automatic weapon into him. Not quite sure what I was doing wrong there but I died much to my dismay as I had accrued a load of cash. This is the game’s first day so balancing does feel a little off. Incidentally, when you are killed you only appear to drop percentage of your cash you accrued, the rest is kept although your gear is dropped for the other payer to pick up. This means you can slowly but surely gain currency to use outside of the game on cosmetics.

I’ll have all your gear. Thanks.

Prize packages are also dropped into the game from the sky with bonuses. They can drop in anywhere and can be seen moving across the map. Players can either go for it or try and ambush other players so it’s pretty standard battle royale stuff. Likewise, there are prize rooms, and if you find one, it takes some time for the door to open. Assuming you haven’t been picked off while trying to open the door, then there could be some useful items and cash inside. Again, it’s risk and reward. 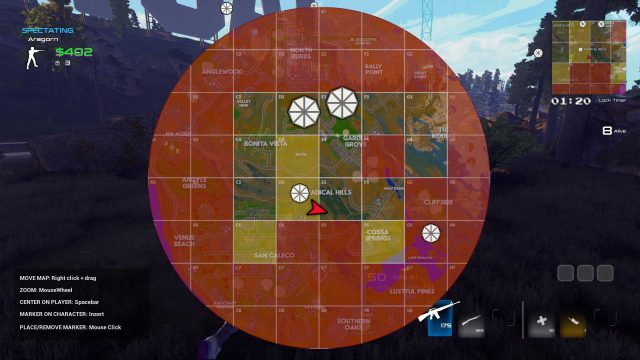 One feature that is quite good is the ATM and offshore account. Money you have banked from previous games can be called upon via the ATM so you can buy stuff early on. You can also store money collected at the ATM so you don’t lose it when you die.

Getting around the map can be done on foot but Boss Key has also added BMX bikes which can be ridden around and they can can perform rudimentary tricks using hte jump key and movement keys. As well as riding, the map contains zip-lines which players can use to move long distances. It doesn’t take too long to get around on foot but some extra speed on a bike may just help you away or chase someone down. 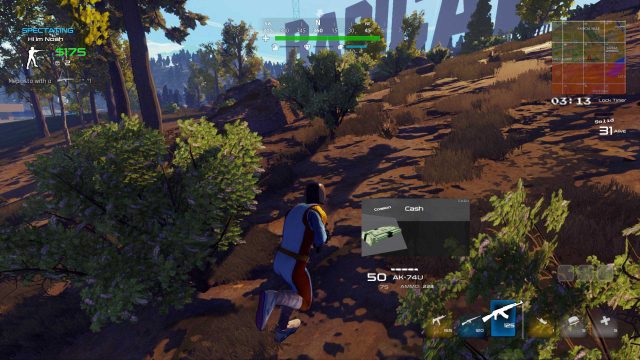 Time for an ambush

Assuming you can make it to the final three players, the announcer says “get ready for the showcase shootout” and the final showdown location is indicated on the map. The final three make there way there to do battle as a huge over the top lighting rig is suspended over the zone. The player who wins the match is rewarded with a tune and it’s Joe Esposito’s You’re the Best Around from the Karate Kid soundtrack which is pure 80s.

Having played a few games this evening I can safely say Radical Heights could turn out OK. It’s not really trying to emulate Fortnite although stylistically there are similarities. Anyone who hates the building aspect of Fortnite should probably play Radical Heights instead and follow it through its Early Access. 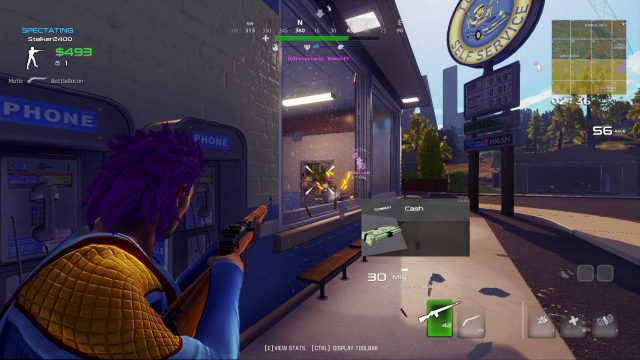 The problem with battle royale games is that they are all essentially the same, and even though there is the game show aspect to Radical Heights, if that wasn’t there it wouldn’t make any difference to the core experience. Drop in, collect stuff, and kill the other 99 players. What Radical Heights does have going for it at the moment is that its free and there’s no building. That in itself could pull some players away from that other game that’s become hugely popular. I would recommend you give Radical Heights a try but don’t expect anything too revolutionary just yet as it’s very, very early days for the game and there’s a lot of work still to do while it’s in Early Access.

No doubt gamers will jump into the Steam comments today and pan it because it’s a Boss Key game but it’s free so play it and then make up your own mind. Radical Heights is available now on Steam.