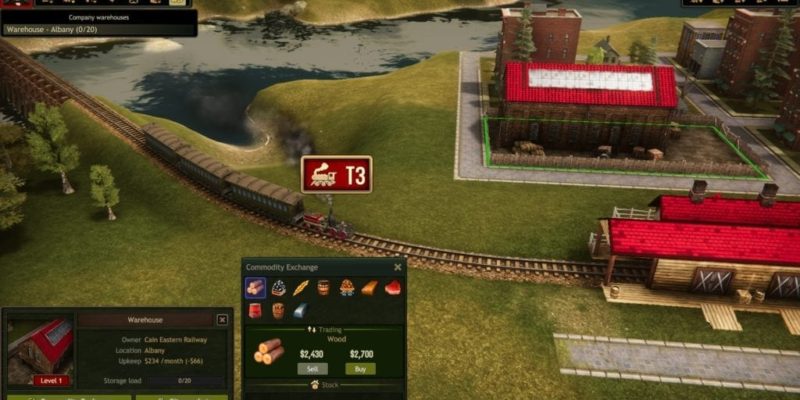 At one point or another, nearly everyone has wanted to be a train conductor. Dreams of blowing the whistle and taking passengers from town to town fuel the imagination of children everywhere. Admit it — even a ton of grown-ups still want to pull a train whistle! While we might not all get the chance to work on the railroad, all the livelong day, we will be able to do so vicariously with Corbie Games’ latest title, Railroad Corporation, on Steam Early Access.

Players will be able to create a railroad network, with historically accurate steam engines, which spans across a recreation of 19th century North America. This was historically around the time where transportation via train had become common and construction on the Transcontinental Railroad had taken place. Railroad Corporation tasks players with laying down rail lines to connect towns together to trade goods. In doing this, settlements will expand and you’ll have a firmer grip on the railroad empire. Yurij Ishchuk, Corbie Games CEO, explains that the team wanted to “shift the focus to economy and business” to further expand on the concepts they built in their previous game, Bounty Train.

There will also be missions to complete that look to task players with expanding their railway to emulate railroad systems from United States history. These connections will also help create new technologies to progress the player further across the continent. When faced with difficulty expanding, there will be options to take part in the politics of the era to try to manipulate the law in your favor. Perhaps players will be able to pull the Eminent Domain card on homesteads that are in the way of their expansion.

Check out the trailer above for some of the gameplay highlights. I’m especially excited to see how the multiplayer mode will work. Railroad Corporation is available now on Steam Early Access for $29.99.

No Heroes Allowed: No Puzzles Either! hits Steam on June 10