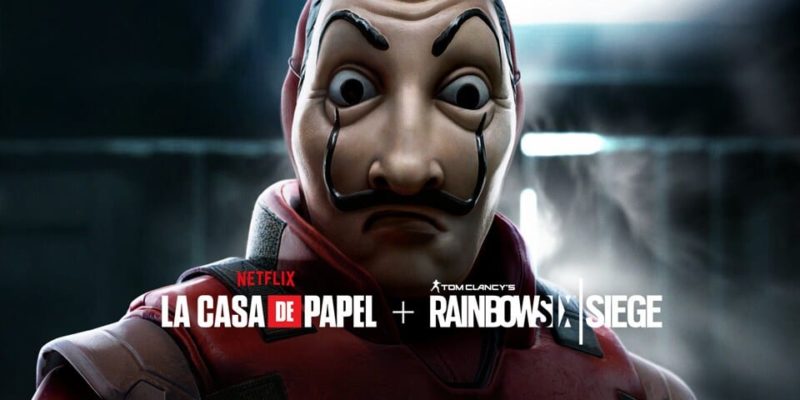 Hot off the heels of the Rainbow Six Siege Doktor’s Curse Halloween event, Team Rainbow is back with a new event. This time the tactical shooter is crossing over with the Netflix series La casa de papel / Money Heist. Just like in the show, this Siege event is taking players to the Bank with a special limited-time Hostage mode.

Starting November 20 and running until November 25, Money Heist isn’t as radical as previous events have been. The Bank map isn’t getting a makeover, and for the most part, none of the operators will look radically different. With three exceptions. The hostage on this map will be decked out in a red jumpsuit and mask straight out of La casa de papel. Hibana and Vigil will be getting full cosmetic kits inspired by Netflix’s Spanish-language crime show.

Both kits are similar: a red jumpsuit and mask, though worn slightly differently. Hibana will have her mask pulled up on top of her head, while Vigil will remain masked. The kits further include a red and white skin for each operator’s primary assault rifle that, by my estimation, is the 9000th red and white gun skin in the game. It will adorn Hibana’s Type-89 rifle and Vigil’s K1A. Both Hibana and Vigil’s bundles will also come with a weapon charm if you’re into that sort of thing.

Netflix is no stranger to mixing it up with video game developers. They are currently working on shows for both The Witcher series and Cuphead. Could this crossover event with Rainbow Six Siege possibly be signaling the early stages of a Netflix show centered around our favorite G.I. Joe -ike operators? It’s unlikely, but if anything is built to be ready for a show, it’s Rainbow Six Siege. Ubisoft has been trying for quite some time now to have people take Siege‘s lore seriously, and a show might just seal the deal.

Beyond that, Rainbow Six Siege will also be inviting players to tell their friends to check out the game. The Netflix crossover event also brings with it a free weekend of play. From November 21 until November 25, new players will be able to access the full Rainbow Six Siege experience for free. While this event isn’t nearly as elaborate as past events like Spooky City, Cowboy Town, and Friendship Plane, it’s a nice way to wrap up the penultimate season of Rainbow Six Siege‘s Year 4 content. Hopefully, it helps kill some of the time until Shifting Tides drops sometime in the near future.