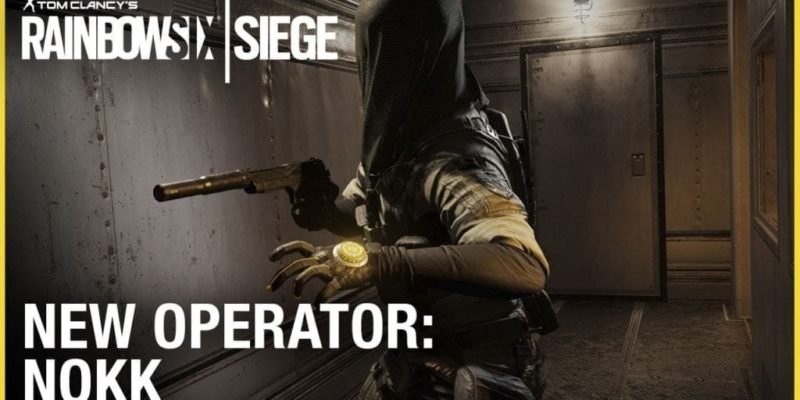 Rainbow Six Siege’s Year 4 Season 2 content just got its first character tease. Today Ubisoft released a blog giving a first look at Rainbow Six Siege’s latest attacking operator, Nøkk. While details remain sparse for now,  it looks like Nøkk will function similarly to the current R6 Siege defender Vigil. Her gadget “The HEL” seems to allow her to become invisible to cameras for a short time. This can allow players to flank entrenched defenders undetected while gaining valuable intel.

The reveal trailer shows a cloaked figure in a dark sewer. Nøkk appears and disappears through digital static as she approaches the camera. A loud musical sting plays as Nøkk reappears directly in front of the camera, reaching out to grab it as the screen cuts to a Rainbow Six Siege splash screen. The video is reminiscent of scenes from horror films like The Ring and The Grudge. This all jives well with Nøkk’s ghost-like appearance and in-game ability.

Ubisoft also teased Nøkk’s role within the Rainbow Six Siege lore. She is an undercover operative and a member of the Danish Jægerkorpset (Jaeger Corps) special forces. Nøkk specifically resembles the Frogman Corps who’s real-world responsibility is reconnaissance. Nøkk has worked with current attacker Dokkaebi on improving Nøkk’s gadget “The HEL.” It is also implied that there is some sort of scandal in Nøkk’s past that may be flushed out in the future.

This is the first character debut for Rainbow Six Siege’s upcoming Year 4 Season 2 content patch, dubbed Operation Phantom Sight. Each season is accompanied by two new operators as well as a new or reworked map. Year 4 Season 1 brought in the Australian operators Mozzie and Gridlock who have found their niche within the meta. Ubisoft is slated to do a full reveal of Operation Phantom Sight live on Sunday, May 19th during the Rainbow Six Siege Pro League Finals in Milan, Italy.

For those unfamiliar, Rainbow Six Siege is a tactical, squad-based shooter. Two teams of five take turns to attack and defend in one of three scenarios: hostage rescue, secure the area, and defuse the bomb. Both the attacking and defending sides are made up of several operators each with a unique gadget or skill to bring to the table. It’s basically the closest thing to a good GI Joe video game that we’ll ever get.