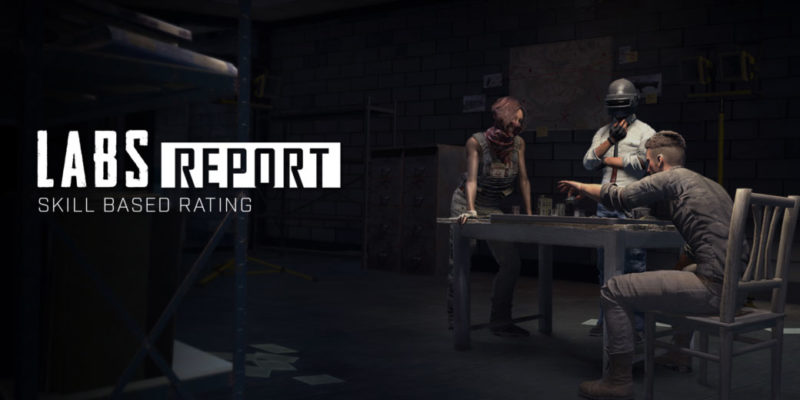 At the end of November 2019, Skill Based Rating went live in the PUBG Labs. Players who opted in to the test were evaluated for six weeks, with a short follow-up test in February. These players were able to give PUBG a load of data to help design the system that will eventually become ranked PUBG matchmaking. They were also able to give feedback and make suggestions for the system.

According to the PUBG Labs report of the Skill Based Rating test, 18.8% of PC players opted in to be evaluated. The PUBG Labs report said, “We would not have been surprised to see 10% or less of players opt-in based on research and experience with other games-so these numbers were very surprising and exciting!”

Those are a lot of thoughts and opinions to sift through. But PUBG says they have taken in all the feedback. And from that, they have identified two major concerns, which they address in the report.

The first is a request to consider damage as part of the Skill Based Rating calculation. PUBG considered this but quickly discarded it. “It turns out that adding damage hurts the experience more than it helps,” says the report. Instead, they have opted for an assists feature. An assist will be awarded if meaningful damage is done by a player who doesn’t get the kill. The algorithm considers assists to be equal to kills.

The second concern was that players didn’t feel like they were playing ranked PUBG, but rather they were just part of another progression system. Just playing more resulted in players ranking up, which is bad particularly for PUBG, since it has time-based mastery systems that people already dislike.

Here is the rank spread from squad TPP on PC: Bronze 2.85%, Silver 37.47%, Gold 30.16%, Platinum 24.15%, Diamond 5.24%, and Master 1.05%. PUBG would like the number of players in Bronze to be a lot higher and the number in Masters to be a lot lower. So, for the second test, PUBG has assured players that the rating tiers will be stricter with their performance requirements. Basically, it will be harder to rank up.

A ranked mode in PUBG is something players have been requesting for a long time. It has taken a while to even get to this preliminary testing phase, but hopefully, the system will revitalize the slowly fading battle royale. It remains to be seen though.

Another thing in the works at PUBG Corp is a new game mode: Team Deathmatch. The game mode was accidentally made live for a brief time but has now been taken down again. The blunder also revealed that there are at least two other modes coming soon. PUBG Corp subsequently revealed that the new mode is part of the “PUBG Arcade,” which will be going live with update 6.2.