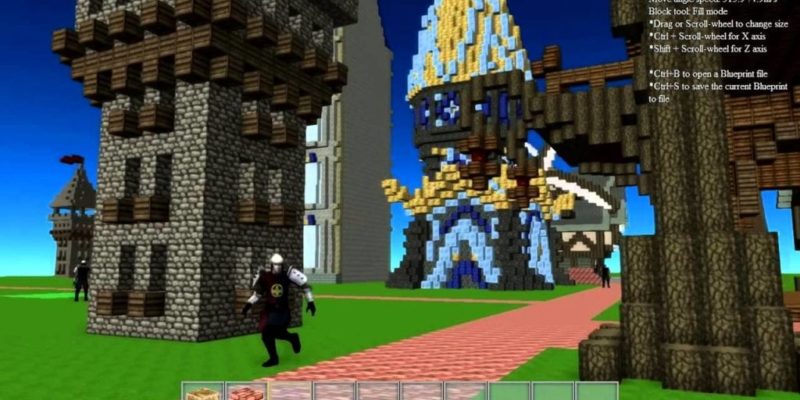 Ambition is no bad thing, and ambition is what the developers of Project Starborn have in spades judging by what this Minecraft-lookalike is offering.

The principle idea behind Project Starborn appears to be “what if Minecraft was driven by a powerful scripting engine and had a big library of user-made stuff you could add to or plonk down?” Or, in a bit more detail, “what if you could build a city/dungeon/castle/desert/space station/basically anything else – like in Minecraft – and then set up a load of game rules and AIs to make it a tower defence game/multiplayer deathmatch arena/racing game/strategy game/RPG/basically anything else?”

So yeah, ambition. Project Starborn is highly mod-friendly (built, as it is, in C++ and LUA) which will pretty much allow players to make any gametype they like. This also makes it really hard to write about, because “you can do whatever you like” is very fast to type and very difficult to expand on in a meaningful way.

What I can say is that the developers are currently aiming for a release in early 2014, and a Kickstarter for the project should be popping up in a week or so. You can have a gander at the official site here.

There’s a trailer that shows off the building bits-and-bobs below. If it looks a bit rough, that’s quite possibly down to the early nature of the game – from what I can gather, a lot of the Kickstarter money is aimed at going towards improving the art.