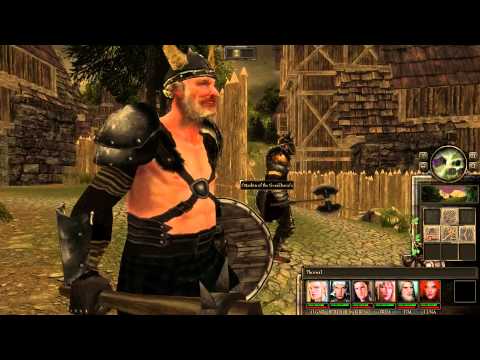 In this Realms of Arkania screen, zombies attack the… wait, those are villagers? Oh dear.

Oh dear. It looks like the launch of Realms of Arkania: Blade of Destiny hasn’t gone well.

Courtesy of reader Allan W., we’ve been alerted to a rather large amount of problems with the game’s launch version on Steam. The first alarm bells should start ringing when you notice that Realms of Arkania apparently only has one achievement right now – called “Testing achievement” – but the problems run far deeper than that.

A weighty thread on RPG Codex (and an equally weighty number of complaints on the Steam forums) indicate that the game has more problems than you can shake an RPG at, ranging from boring ones like regular crashes, placeholder text, and untranslated text, through to slightly more entertaining ones like “many NPCs have holes in their heads”, “save game randomly deletes itself”, “all weapon models look like crossbows”, and “you start with infinite money, which randomly resets to normal during gameplay.” Entertaining as long as you haven’t paid for the game, anyway.

As those complaints are based on the early German release, some of those problems may have been fixed by now (the “Day One” patch apparently fixes the possibility of savegames being corrupted after a fight), but the patch schedule on the official forums doesn’t bode particularly well for its current state.

The patch scheduled for today, for instance, will apparently “fix random crashes” and “fix half-translated character screen” while one due tomorrow will “continue to remove placeholder [text] based on community reports.”

Even without this, things still don’t look particularly great. I’ve embedded a YouTube video of the game below, but for maximum amusement skip to 3:17 to hear the narrator struggle with poorly-translated text. Oh, and the screenshot above is from user Clockwork Knight on the aforementioned RPG Codex thread.

We still haven’t got review code in. I wonder why.

We’ve reached out to developer Crafty Studios (which, in hindsight, are rather unfortunately named) for comment, and have also asked a few questions of Valve since Realms of Arkania is the second train-wreck of a launch after The War Z/Infestation: Survivor Stories. I don’t expect any response from the latter, but you never know.

Rise of the Triad review