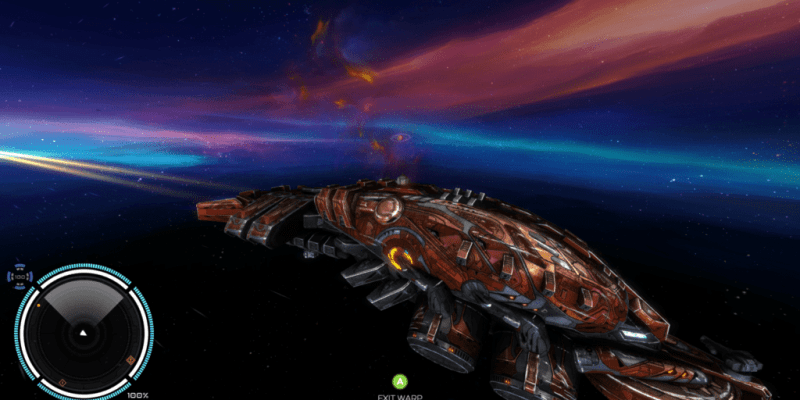 Double Damage’s Rebel Galaxy is a tighter, more straightforward version of the trading and bounty hunting model found in classic space sims like Elite or Privateer, much enlivened by its Old West Frontier vibes. Space cowboys are not a new idea, but this game embraces its theme with heart and gusto, going all-out with bar-room patter and (in particular) licensed music to make the player feel as close as possible to an amalgam of Han Solo and Bronson’s ‘Harmonica’.

Every sketchy outpost has a knowledgeable bartender with attendant mercenary gunslinger, and every combat encounter is accompanied by liquor-splashed slide guitar and nothing-to-lose lyrical turns about riding the devil’s train or being fresh out of luck. It’s “Detonation Boulevard” by way of ZZ Top, and, whether you respond to that sound or end up taking advantage of the game’s custom soundtrack options, there’s no doubt Rebel Galaxy nails its intended tone.

That note-perfect atmosphere goes a long way to extending the longevity of familiar game mechanics beyond their usual stay of welcome.

Nobody fucks with Steve. Sorry … Stephen.

The story’s opening bequeaths you a basic ship by way of a mysterious Aunt, who (it turns out) has also granted you an even more mysterious artifact. If you follow Rebel Galaxy’s 25-30 hour narrative to its conclusion, you’ll discover (across multiple missions) why everybody is so keen to get their hands on this device.

But if you like, you can almost entirely ignore the main story. The nature and structure of the game is such that players are able to start forging their own money-making paths almost immediately. Those primary narrative missions do contain some unique, scripted encounters that may otherwise be missed, but if you’d rather dedicate yourself to a full-time career in trading or piracy, that’s up to you. It even appears to be possible to follow the main missions as a pirate (I was more of a pro-militia goodie two-shoes myself), which would, by necessity, branch the narrative in certain ways.

You can also continue to play after wrapping up the story, which is probably the only way you’re ever going to afford a Dreadnaught vessel full of top-tier, Mark 6 weaponry.

Rebel Galaxy’s universe is divided into thirteen different zones (the names and specific lay-out of which are procedurally generated at the start, so I’m assuming it’s always thirteen), connected by jump-gates. Each of these zones are fairly sizeable, stuffed full of space stations, pirate outposts, and Merchant Guild ports (which are, again, randomised in their placement). The majority of your time will be spent shuttling between these docks at warp speed, picking up bounty-type missions, doing some trading, and upgrading your ship’s equipment or hull.

It may not accurately model 5 billion real-life star systems, but Rebel Galaxy still has its share of moody and majestic space moments.

It’s important to point out that although games like Elite (the original one) are clear inspirations for Rebel Galaxy’s gameplay loop of open-space money making and ship improvement, this title largely operates on a 2D plane.

Actually, it would be more accurate to say that your own craft’s motion is restricted to 2D. Objects appear above and below you in the world, and smaller ships like fighters will buzz around your vessel (and can be shot down with turrets, aimed in full 3D), but this is very much not a space title that will demand a flight sim-esque desk set-up. The emphasis is on simplicity and, in combat, on naval-style broadsides.

Comparisons to the ship-to-ship battles in Assassin’s Creed: Black Flag are fairly inevitable, and pretty reasonable. There’s a similar emphasis on remaining aware of your positioning relative to other ships (finding yourself between a pair of well-armed destroyers is bad news), and the same dedicated button for a limited, damage-mitigating deflector shield (akin to Black Flag’s ‘brace’ system). Rebel Galaxy dispenses with any sort of boarding mechanic, but goes more in-depth with different weapon types (dumb-fire rockets, homing missiles, mines, beam lasers, various turrets) and gives enemy craft distinct shield/armour values on all four sides. There’s a tactical imperative to keep maneuvering yourself into a position where you can pummel a damaged flank.

The game has a reasonable spread of faction vessels (both human and alien) for you to tangle with, each with their own distinct styles, naming conventions and language (which I’m pretty sure at times is just someone reading things out in a foreign language they don’t understand).

There’s no shortage of ships for the player to use either, with twenty-some unique craft dotted throughout the game’s various specialist space outfitters. Equipment is equally bountiful, with plenty of ways to cover your vessel in weapons, engine boosts and other useful gadgets, each manufactured by companies with evocative names like ‘Old Sun Ballistics’.

As with most non-linear games of this type, how long it keeps you engaged depends in part on the variety and creativity of activities on offer. It also rests on how long the player is prepared to accept that the stylistic trappings are there to disguise the fairly repetitive process of ‘get more money, upgrade ship a bit more’.

Rebel Galaxy’s tone and presentation help a great deal with the latter, and while you do eventually hit a point where you’ve pretty much seen every possible mission ‘type’ out there, the dynamic depth added by a system of random galactic events do a lot to keep the universe feeling vibrant and ever-changing. At any given time, a number of space stations within a zone will be experiencing a siege by alien craft, or a famine, or a glut of marketable products, or similar such opportunity for the discerning trader and swashbuckler. Events like these, and mid-travel distress signals (sometimes traps laid by wily pirate), act as immediate motivations to take action and involve yourself in the galaxy’s business.

You’ll also sometimes happen across unmarked space battles between groups of hostile craft and the local space cops, which you can merrily wade into if you fancy. Or just sit back and admire the swarms of missiles and network of laser-fire being exchanged between fighters, frigates and beefy dreadnaught-class vessels.

In the future, space battles will be decided by who puts on the prettiest light-show.

Predictably, perhaps, for an open-space title effectively made by two people (former Runic and Blizzard North duo Erich Schaefer and Travis Baldree), Rebel Galaxy isn’t without the odd bug and quirk. Escort missions are particular culprits, relying as they do on a ‘warp pairing’ system that’s supposed to line you up with the relevant ship and keep you at the same speed. Except sometimes the escortee just kind of turns around aimlessly in space, confused by floating space debris and unable to navigate around it. Or your own ship flies off in the wrong direction and refuses to behave.

I’ve also come across a couple of ‘protect this merchant’ missions where the poor trader gets blown up instantly, which I’m fairly sure isn’t supposed to happen. And the system of giving each mission a risk rating of ‘very low’ to ‘don’t-even-bother’ occasionally seems to over or under-rate the potential dangers by quite a significant margin. The presentation of galactic trading prices is less helpful than it could be, and battles could probably do with an FOV option to prevent overly-tight camera angles too.

Such things may well be addressed in due course, because the developers have already proven themselves to be swift responders to player problems. They dealt with a bugged mission I encountered during the review period within about half an hour, and took similar patch action with other issues during the pre-release window. [Edit]: It looks like changes to escort missions are coming soon, in fact.

While a controller is recommended by the developers themselves, Rebel Galaxy functions pretty capably on mouse and keyboard. Not to the extent that I’d want to switch away from a gamepad, but it’s a commendable, and perfectly usable, effort.

At $20.00 USD, Rebel Galaxy feels perfectly priced. It’s a title that operates on the sprawling scale of outer space, but it also feels very focused; a game which ably demonstrates the importance of matching scope to fit a budget. The trading, bounty hunting and mining of popular space sims are fully present, but pared back to their essential components. Rather than a full 3D flight model, there’s a novel (but undeniably more straightforward) 2D broadside-based combat approach. Dynamic galactic events and the wonderful space-gunslinger tone keep things rolling well beyond the point that familiar mechanic fatigue would set in with a less aesthetically-aware title, and, while that feeling lasts, Rebel Galaxy provides the galactic bounty hunter experience better than most.

If you already own the game and need a hand in the first few hours, this PC Invasion guide may prove useful.

Just Cause 3 has gone gold