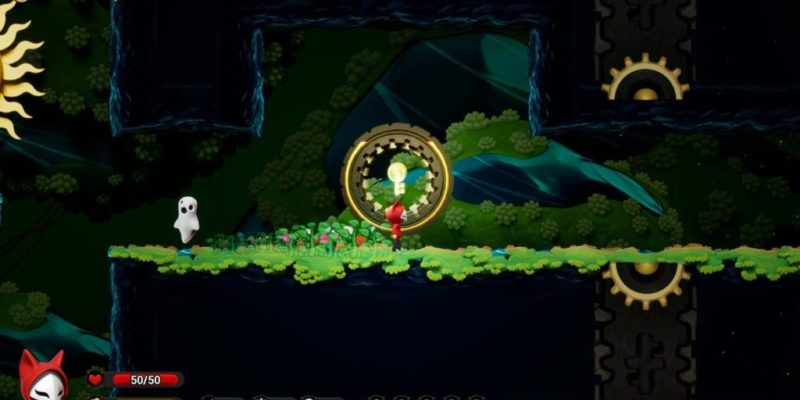 Who knew a game about traveling through the depths of Hell to defeat the sins of the damned could be so cute? Red and the Deadly Sins follows the journey of Red—a tiny, masked soldier set forth by the Soul Cleansing Committee to free souls that were doomed by negative emotion. This adorable grim indie game is available on early access starting today.

Created by Chinese indie game developer Diantong and published by the Russian group 101XP, Red and the Deadly Sins is a Metroidvania-esque retelling of The Divine Comedy by Dante Alighieri mixed with the Chinese philosophy of life. Players will travel through the seven circles of Hell meeting trapped souls and learning of the emotions behind them. Each circle and boss will be representing one of the seven deadly sins and, of course, become increasingly more brutal each step.

Aside from a familiar story, the bright almost innocent design contrasts the deep, existential subtext and allusions to the real world developers suggest the game offers. A slew of puzzles and secret rooms are also thrown into each level for an added touch of intrigue and difficulty.

Here’s a look at the freshly released trailer.

According to the steam page, the early access for Red and the Deadly Sins includes three levels and three complete bosses along with common enemies and characters for a playable experience.

The full game is expected to include 4 additional stages and bosses along with more fighting mechanics, characters, and secrets. Diantong has also mentioned its desire for community feedback and is welcoming players to voice their opinions through the Steam Hub.

Currently, there is no official release date or price for the full game; however, the early access version is available right now on Steam. It’s currently priced at $7.99, but it’s being offered at 10 percent off until May 22, 2019, bringing it down to $7.19.

Ubisoft’s Skull & Bones gets pushed back to 2020