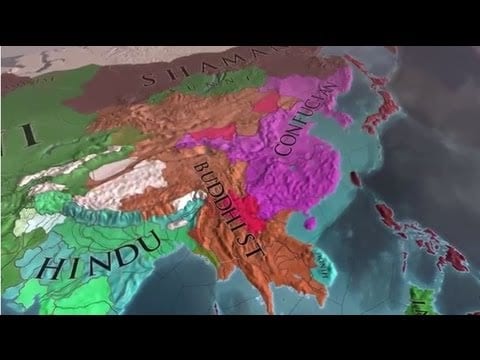 Europa Universalis IV lead Thomas Johasson is looking rather casual as he delivers this developer diary about the game’s religious mechanics from a comfy leather chair in a pretend library. I’m not sure why he’s so relaxed, the subject of religion is a tricky one and you never know when you’re going to offend or upset half the world.

Will Europa Universalis IV manage to do this? Probably. Religion in general seems to be a way to squeeze more tax revenue and devotion out of your populations, which is a bit of a cynical (if accurate) portrayal. I’m also not too sure about Islamic nations having a ‘piety’ rating that goes up when they, err, go to war with heathens. Still, maybe everyone gets that. Devout religious nations do love a good war, after all.

Anyway, the upshot of this video is that religion will be having an influence on your nation in unique ways, depending upon which nation you’ve chosen to play as. You won’t be able to ignore it, and if you conquer nearby regions with different religious beliefs you’re going to have to decide whether to integrate them into your expanded nation or start committing war crimes. Decisions, decisions!

Europa Universalis IV is due out in August.

Borderlands 2 plus DLC for a tenner: Greenmangaming’s 666 Sale begins

The sky’s the limit for Call of Duty: Ghosts pre-order DLC