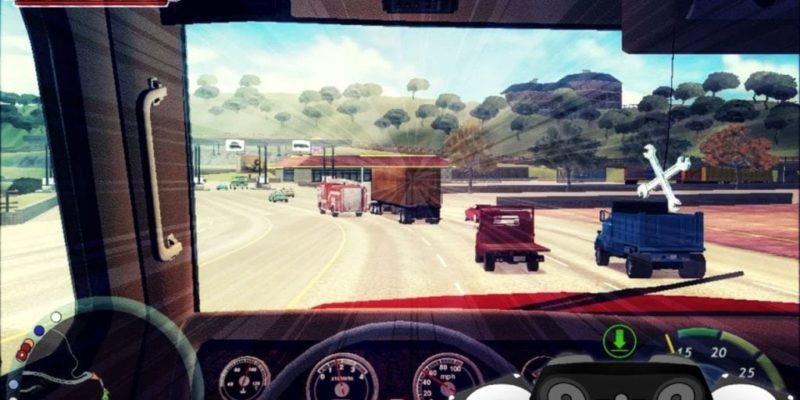 In this episode, we’re taking things back towards the territory of simulators, with SCS Software’s 18 Wheels of Steel: Convoy. Released back in 2005, this truck driving sim is the second youngest game that’s been featured so far, coming in five years before last episode’s Split/Second. So with a total of 10-years under its belt, how does it handle today?

Convoy is the third installment in the 18 Wheels of Steel franchise. With this iteration, SCS Software gives you the keys to over 35 trucks which you can drive throughout the entirety of the United States, as well as a few cities in Southern Canada. For the most part, these cities have a distinct look to them with real-world landmarks even being present, like the Golden Gate Bridge in San Francisco, and the Luxor pyramid in Las Vegas.

Being a truck driving simulator, naturally your goal is to pilot the various big rigs on the open highways from point-to-point, delivering different kinds of goods. Convoy features over 45 different pieces of cargo and over 47 different trailers. The game allows you to go ahead and become a delivery-boy for hire, so to speak. You drive to various locations throughout the map and each point will give you different kinds of contracts. For instance, one company may ask you to deliver frozen foods, while another may ask you to deliver a tractor. All of these contracts offer different experiences, as each delivery will carry you to another city and offer a different level of difficulty depending on what you’re carrying.

Your performance with each delivery is crucial as it affects your reputation. The more efficient you are, the more opportunities will be open to you, which thus allows you to climb the ladder at a faster pace. Convoy does a pretty decent at simulating the life of a truck driver. Seeing that this is a simulator, you don’t have the same freedom as an arcade title. For instance, your truck uses actual gas, so there are times when you’re going to have to stop and refuel, just like in the real world. In other instances, your driver will get tired thus causing you to have to find a truck stop to catch some Z’s. But of course, the main feature is definitely the driving experience itself.

Each job is important.

These big rigs are neither fast nor nimble; you wouldn’t expect them to be, after all. So if you’re already used to tearing down the asphalt in a super-car, then this is going to take some serious getting used to. Being a simulator, there’s also some times that you will encounter penalties.

There are cops scattered throughout the world. If you commit a traffic infraction such as knocking into another vehicle or running a red light, this will cause add a notch to your Heat Meter. (That’s right — GTA has even managed to influence simulators.) If you pass a cop with any heat, then you’ll be pulled over and just like in real life, you’ll end up paying a fine. It’s little features like this, among many others, that make Convoy such a cool game.

Now then, how are the trucks themselves? With 32 to choose from, each truck has a distinct look and feel. As you’d expect, you’ll start off in a low-end model, and as you do more jobs and earn more cash, you’ll gradually gain access to more powerful trucks. Each truck you buy really is your own, as you’re able to customize its appearance and performance. If you damage it, you’ll even have to pay for it to be fixed.

Getting into the technical aspects, naturally you shouldn’t expect to be wowed by its visual presentation. Nevertheless, Convoy was a pretty decent looking title for its time, especially considering the nicely detailed cockpit that each truck has. The overall quality of the models is pretty good, but the rest of the world is relatively average. Nevertheless, considering its insanely low system requirements, the fair level of visual fidelity is forgiven. On a better note, the trucks happen to sound as good as they look. Each truck has a relatively distinct engine sound. The sound of the engine also dynamically changes between the interior and exterior, which is also another nice touch.

Since Convoy, there have been five more additions to the 18 Wheels of Steel franchise that has ran up until 2011. For the most part, the series has progressed relatively well, with each new entry adding something significant to the mix. While Convoy may be fairly aged, it’s definitely still worth playing.

In the end, 18 Wheels of Steel: Convoy hasn’t really lost too much of its charm despite it being 10 years old. Its attention to detail was great back then, and still is now. This is definitely a nice title for simply relaxing with. There’s a lot to do inside a pretty decently sized world, so taking your time to take it all in is exactly what this game is all about.

With that said, make sure you go ahead and give this one a try!