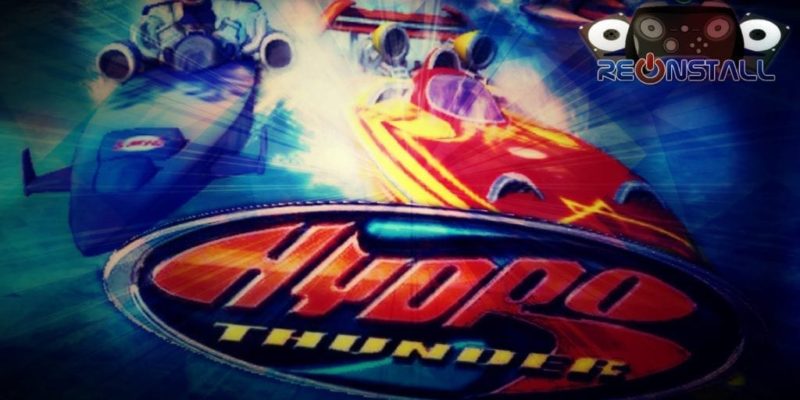 In the last episode, we took a look at BurnOut Paradise. As you may remember, the BurnOut series is all about crashing and bashing your way to the finish line, while pulling off some sick tricks and letting the nitro fly. With this episode’s title, it’s basically the same concept, except this time, forget the cars and hot asphalt — we’re heading to the big blue.
For this episode, we’ll be taking a look at the aquatic madness of Hydro Thunder. Developed by Midway, a studio that’s known for cool racing titles, this arcade-born boat-racer found its way onto 7 other platforms, making it the most widely-circulated title that we’ve covered so far.
With 16 years under its belt, it also happens to be the second oldest game that we’ve featured coming right after FreeSpace 2. So after almost 2 decades, how does it hold up? Let’s find out!

While BurnOut had you rolling around in sweet rides, Hydro Thunder has you piloting super-charged, high-tech race boats that are built for achieving amazing speeds and taking a beating. The tracks you pilot these boats on are also pretty insane, as you’ll find yourself in situations like charging through a ship boneyard, exploring a lost volcanic island and even maneuvering through a post-apocalyptic New York City. (Yes, it’s that extreme).
Seeing that it got its start as an arcade game, it only has one mode, that being a single race. The game does feature a career mode, although that was exclusive to the original PlayStation version.
Your goal is to out maneuver all of the other boats on the track, and get the fastest time.  The game features a leaderboard system, which shows who has the fastest time on each track and which boat they used. Scattered across each track are blue and red boost orbs. These orbs fill up the nitro gauge, which is the key to getting the fastest time. While boosting, you also get the chance to bash your opponents out of the way, which makes it easier to pull your way up to first place.
Both the tracks and the boats are separated into four categories: Easy, Medium, Hard and Bonus.
The Easy category is, as you would expect to be, relatively straightforward. The boats are easy to control and the tracks are simple to maneuver through and pretty short. The Medium boats are a little harder to control, but are also a little faster. The tracks here are longer than those in the Easy class, and may take a little getting used to. For the Hard category, the boats here are pretty sensitive, and also very fast. The tracks are also relatively chaotic with a lot of stuff going around you, and take a little bit of time to complete. As for the Bonus category, everything is cranked up to 11. This mode is only unlocked by entering key combinations. The boats here are even harder to manage than those in the Hard-class, and the tracks are even more insane.

All-in-all, Hydro Thunder’s gameplay certainly isn’t that of your average racing title. It’s a fully-fledged arcade title, and it knows it. Nothing in the game is meant to be taken seriously, which is what makes it so fun.
Graphically, the game has definitely showed its age, but just like FreeSpace, the graphics are more nostalgic than dated, which makes them relatively pleasing. While the quality of the textures certainly won’t wow you, the special effects are still really nice, and considering each track is one level of madness after the other, you can expect to see a lot of them.
In the end, Hydro Thunder is definitely one of those games you play as a good distraction. It’s great for killing 20 minutes or so, and also offers a sense of local competition as you try to beat your friend’s best time. It would be great to have something as frantic and fun as this today.
Wait a second….

Back in 2010, Hydro Thunder: Hurricane was released on the XBOX Live Arcade for the XBOX 360, with a release to the Windows Store following shortly after. Developed by Vector Unit, the same studio behind the awesome Riptide GP series, Hurricane features an upgraded version of the original’s formula. Offering more modes and greatly enhanced graphics, it went ahead to receive generally good reviews. So unlike most of the other titles that we’ve covered so far, Hydro Thunder’s legacy actually did continue.
With that being said, there’s no doubt that Hydro Thunder is a pure mini package of fun. With insane tracks, wicked boats and solid gameplay, it’s definitely worth giving this one another go!