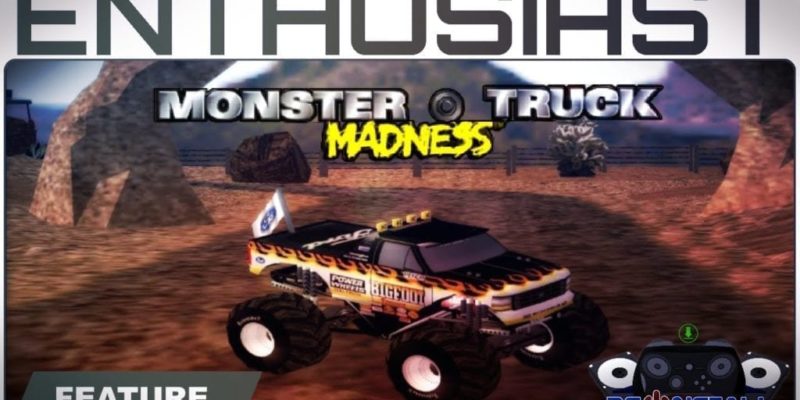 Welcome to yet another episode of the ReInstall series! This time, we’ll be taking a look at a real blast from the past—today’s title is nearly 18-years old. This makes it one of the oldest titles to be featured in the series so far. Enter: Monster Truck Madness 2.

Released back in 1998, this classic racer has quite a bit of age under the hood. How does it old up today?

Monster Truck Madness 2 was developed by Terminal Reality. It’s the sequel to the 1996 release of the original Monster Truck Madness. While both titles were built on the same engine, MTM2 possess a whole slew of new features from its predecessor: upgraded graphics and a fresh interface. This is aside from the new trucks and tracks which have the addition of variable weather conditions. The improved graphics were really shown off with the way that the trucks’ headlights would light up the terrain realistically during storms.

MTM2’s gameplay speeds across 15-tracks, which are separated into three categories: Circuit (8), Rally (4) and Summit Rumbles (3). Circuit and Rally tracks operate much like traditional races, while the Summit Rumble tracks are “King of the Hill” style multiplayer-only events. In addition to the 15 included tracks, there are 20 trucks, which are all real-world vehicle representations. If you’re familiar with the monster truck scene, then you should recognize a few. Monster Truck Madness 2 also happens to be one of the first games to support online multiplayer. In fact, the aforementioned Summit Rumble tracks could only be played in the online multiplayer mode. There are functioning servers to this very day.

The racing is exceptionally fun. Blasting these big rigs across rough terrain is definitely a different feeling from that of a traditional racing title. Because these trucks are so high off the ground, rolling over uneven ground and pulling off jumps feels like a whole new experience than in other racing titles. The controls are surprisingly smooth too. The game supports a variety of different controls options, so you’re free to choose what you are most comfortable with. The trucks are responsive and fairly easy to control. The tracks are varied, each possessing a different theme and layout. None of them feel out of place and really compliment the atmosphere of the game.

As mentioned earlier, both entries in the Monster Truck Madness series were built on the same engine. Because of the similarities between the two titles, the player community has been able to add custom content that is compatible across both games. There are over 4,500 custom tracks, and 5,400 custom trucks that have been published. If you are wondering where to find this content, the original site “MTM2.com” is still open today, hosting links to smaller websites which all possess different custom trucks and trucks which are available to download for free.

The player community has also created various utilities which enhance the experience of the game. This includes programs like a track and truck creator, and even a graphics renderer which allows the game to be played properly on modern-day machines with traditional aspect ratios and resolutions. For having been released in 1998, the quality of the game was superb, but it does a look quite dated by modern standards. But hey, what do you expect from a game that’s nearly two decades old?

The rest of the title’s presentation is pretty decent too. Heavy metal makes up the soundtrack. The genre definitely fits the monster truck theme. The songs aren’t exactly memorable, but do enhance the experience. The engine sounds of the trucks are also pretty decent, but definitely limited.

Monster Truck Madness was reworked and turned into the 4×4 Evolution series.

Terminal Reality reused many of Monster Truck Madness 2’s elements to create a greatly updated version of the game engine, which produced the first entry in the 4×4 Evolution series which was released in 2000. It’s sequel, 4×4 EVO 2, was released a year later. And, there hasn’t been any other entries since. [EDIT: The studio itself is now defunct, closing its doors as of December 2013 in Dallas, Texas.

All-in-all, Monster Truck Madness 2 insane age hasn’t stopped it from being a joy to play, even today. Terminal Reality did a great job with this title. There aren’t that many monster truck racing games out there (and many of those that are there are rather poor), so this should be considered a treat.

With its vast amount of user-created content to browse through and download, as well as utilities which make it possible to enjoy the game on modern-day properly, you really should have no excuse to tame your curiosity and get truckin’!

King’s Quest: Once Upon a Climb PC Review