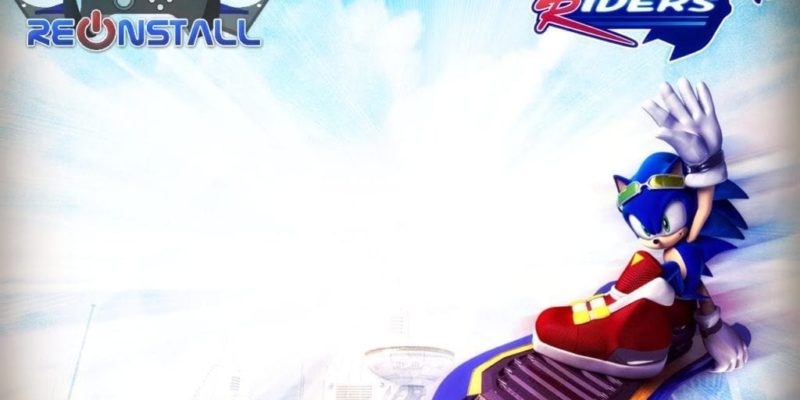 In the last episode, we featured SCS Software’s open-world truck driving simulator, 18 Wheels of Steel: Convoy. For this episode, we’re taking things back to the realm of fantasy; specifically, the world of Sonic the Hedgehog.

Back in episode 3, we featured Sonic Heroes. In today’s episode, we’ll be taking a look at the 2006 release of Sonic Riders. As SEGA’s third attempt at trying to get the Sonic series into the racing genre, and the kick-off for the Blue Blur’s 15th anniversary, Riders had a lot of weight to carry on its shoulders. So, how does it stack up?

Sonic Riders was the first racing game in the series in 8 years. Previously, Sonic Team tried to have Sonic & company race in cars in Sonic Drift and then on-foot in Sonic R. Neither of these titles were considered truly successful. With that in mind, it’s easy to see why almost a decade had passed before it was decided to give the series another shot at the racing genre.

With Riders, Sonic Team decided to use the experience they had gained from Sonic Adventure and Heroes and create a Sonic title that had its own story, but with everything revolving around racing: hover-board racing to be exact. The futuristic design gave the game a bit of an identity of its own rather than another obvious attempt at trying to branch off of Mario’s success.

While the game’s story mode certainly isn’t one of its best features, the gameplay does make up for it to a large extent. Sonic Riders allows you to take control of a variety of different characters. Each of the characters are separated into one of three categories: Speed, Power, and Flight; just like the aforementioned Sonic Heroes.

Each track in the game has shortcuts that are specific to each of the categories. Speed characters can grind on rails, while flying characters can fly through the air for a short period of time, and power characters can punch through walls and other heavy obstacles. This varied selection of characters adds an interesting flare to the game. Even so, which type of character you choose isn’t really all that important, it’s just a matter of what you’re comfortable with.

What really matters is what ‘vehicle’ you decide to use. Referred to as Extreme Gear, these vehicles are also varied in type. Of course, there’s the traditional hover-boards, but you also have hover-bikes, and hover-skates. Each piece of Gear handles fairly differently, so it’s crucial to experiment to see which you like better. New Gear is obtained by visiting the shop. The currency is made up of the rings you collect in each race.

Seeing that these are hover vehicles, you may be wondering where they get their energy from. That’s a key component of the gameplay; it’s called the Air Gauge. Similar to the gas gauge in a traditional vehicle, the air gauge shows how much air is remaining in the tank. When you run out of air, your racer is then forced to run.

While each character is able to run at a fairly fast pace, it’s still not fast enough to keep up with the other racers. That’s why it’s crucial to avoid running out of air, which is done by perfectly pulling off tricks and collecting short bursts via item boxes. If you do run out, there are stations which can fill the tank back up, however, this will cost you a few seconds which could mean losing the race. It’s mainly this game mechanic which separates Riders from the general selection of arcade racers, and that’s a good thing.

Now then, how about the tracks?

Sonic Riders features a total 10 main tracks that are free to race on under normal circumstances, as well as 3 unlockable extras. The 10 main tracks are primarily made up of 5 originals. The other 5 are variations of each track. For instance, the first track, Metal City, has the variation: Night Chase. The difference between the two is mainly a change in aesthetics, with a few design changes here and there. But for the most part, they’re practically two sides of the same coin.  This is one of the problems with the game, as it does seem like a lazy development decision. Nevertheless, the core game is still fun to play.

The sense of speed is amazing, and the level of satisfaction you get by pulling of a solid combo of different tricks is definitely very high. Not to mention the fact that the course designs are actually really well done. They’re all a bit outlandish; far different from what you’d see in a normal racing game, and that’s a good thing.

Now it is true that the controls are a bit twitchy; it’s very easy to find yourself careening into a wall, or pulling off a trick you didn’t intend to. Even so, once you get used to it, it’ll all start to come together pretty smoothly.

As far as presentation goes, Sonic Riders was a decent looking title back in its day. While there’s certainly nothing impressive about it now, it has still managed to age fairly well. Like Sonic Heroes, the character models do seem to be less detailed than they should, but this is something that’s only really obvious during the game’s cutscenes.

Like practically every game in the Sonic the Hedgehog franchise, Riders has a pretty solid soundtrack. All of the songs in the game are fast-paced and wild, as they should be since it is a racing game. For the most part, they have a techno-rock style which also fits the theme of the game. No song is really better than the next, but they all do have the potential to get stuck in your head. Overall, the presentation aids the gameplay pretty well.

Sonic Riders proved to be successful enough for SEGA to have Sonic Team turn it into a trilogy. Sonic Riders: Zero Gravity was released exclusively for the Wii and PS2 in 2008, and Sonic Free Riders was released exclusively for the XBOX 360 Kinect back in 2010. While both titles added on to the formula that the original Riders established, they were both flawed. Zero Gravity was received with the same “fair” level of quality, while Free Riders dropped it all to the floor with mostly negative remarks.

In the end, Sonic Riders is a pretty decent arcade racer. It doesn’t borrow too much from Mario Kart where it would make it seem like an overly-complicated clone, but rather, a fairer attempt at trying to challenge it. Of course its quality isn’t anywhere near the Mario Kart series, but Riders is still a fun game.

While its story mode won’t wow you, the track design and trick system is nice, as is the presentation. The controls take some getting used to, but once you do, there’s a good chance you’ll be left feeling pretty satisfied.