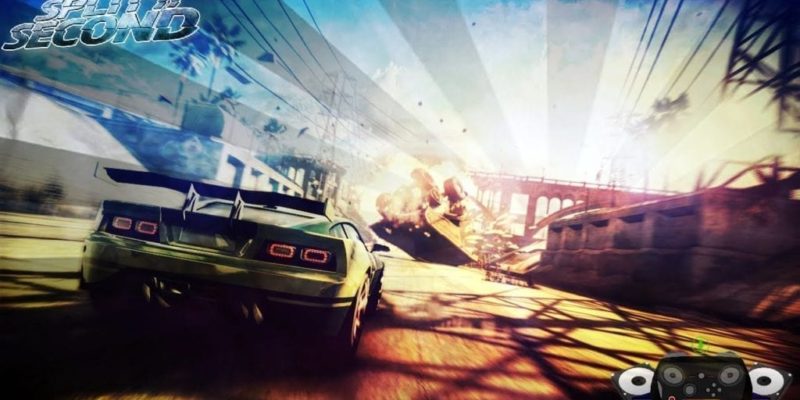 Disney’s SplitSecond was developed by Black Rock Studio back in 2010. This over-the-top action racer is the youngest game that we’ve featured so far, coming in with an age of only 5 years. While it’s still a fairly recent title, it’s still a half-decade old. So then, how does its madness hold up today? Let’s find out!

Just like the BurnOut series and even Hydro Thunder, SplitSecond focuses more on the wild and crazy side of racing. The difference here is that SplitSecond pushes the envelope just a little bit further. How so? Well, how does destructible environments sound?

Like a Hot Wheels toyset come to life, SplitSecond takes place in realistic locales, but with an insane twist: there are explosives everywhere.

The plot behind SplitSecond is that it’s actually a fictional reality-TV show in which players race for money and glory. While driving skills are definitely a factor of success, what really matters is how well you manage your ‘Powerplays’.  Powerplays are special instances where a racer can trigger an explosive event that hinders the other drivers. This can range from something simple like a gas station exploding, to something extreme like an Air Traffic Control tower hurtling down onto the track.

These triggers are littered all over each track from start to finish, making for a heart-pumping charge to the finish line every time. PowerPlays have two levels: simple and extreme. Which you can use is dependent on how full the PowerPlay Gauge is. The gauge is separated into 3 bars; the first two which are colored blue indicate a simple trigger, while the final red-colored one indicates an extreme trigger is available. Red triggers are positioned at special points in each track, which makes for an exciting spectacle. The gauge is filled up by means of avoiding obstacles, drifting and taking out other drivers.

SplitSecond also features multiple game modes aside from the traditional Lap Races. There’s also Elimination matches and special events like avoiding explosive barrels dropped by an 18-wheeler. The variety of different events make for a nice mixture that’s bound to keep you entertained for a good while. Winning an event is crucial to progressing in the game. The position you place at the end of each event determines how much Credits you gain. The more Credits you obtain, the further you’re able to go.

It’s one wild ride from start to finish.

Now, let’s talk about the most important factor: the cars. All of the cars featured in the game are completely fictional, with designs that barely resemble any real-world vehicles. Each car has different stats which can’t be altered. The only thing you can customize is its appearance, which involves the color and decals. This means that it’s pretty important to always score high in order to unlock better cars.

Some cars are faster, while others handle better, and then there are those that can take a heavier beating. It’s up to you decide which vehicle resonates with your style the best. In the end, these vehicles don’t have any memorable designs, but that doesn’t make blowing them up any less fun.

One thing to note is that while the destructible environments are exciting and gorgeous, the cars surprisingly lack the same amount of detail. When they’re destroyed, it’s simply a matter of little bits and pieces flying off and a charred metal body remaining. This is miles behind BurnOut Paradise’s crash scenes, where you can see the actual body of each car crunch and mash in specific areas. While a disappointing oversight, at least the explosions are still amazing.

Focusing on presentation, SplitSecond is a mixed bag. The game’s visuals are loud and gritty, as you’d expect them to be. While certain lighting effects and definitely the special effects are impressive, once again, the cars seem to lack the same amount of detail. The sound work is also pretty lax at best. The music is generic and unmemorable and the engines of the cars are pretty soft and almost unnoticeable. While this isn’t really a huge problem, it’s still an important point to bring up, and can be taken as a con.

Hotline Miami 2 level editor dials B for Beta in December