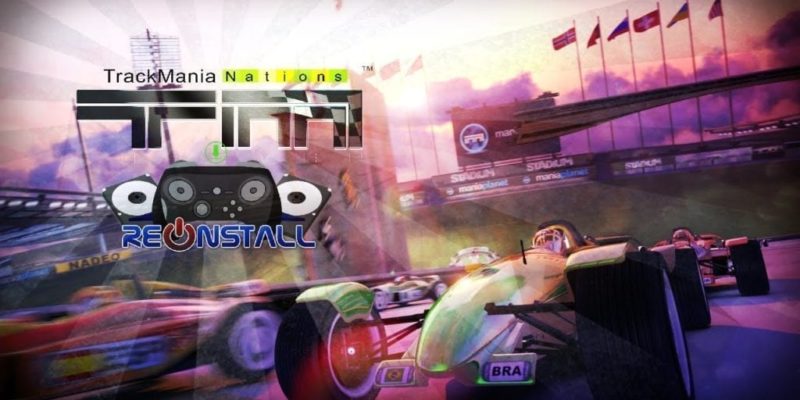 The ReInstall series is all about taking a look back at older titles that are still fun to play even today.

Last time, we took a look at SEGA’s first good attempt at trying to get the Sonic the Hedgehog franchise into the racing genre — the 2006 release of Sonic Riders. We’ve covered quite a few racing titles already, but today’s game really goes above and beyond. Enter Trackmania Nations Forever.

Developed by Nadeo, this racer was released in 2008—a whopping 8 years ago. While this title has quite a bit of age, that certainly hasn’t degraded its quality. Coming from a long running series which has time and again proven to be a shining force in the arcade-racer genre, Trackmania Nations Forever is a game that belongs in the collection of any racing fan.

The best way to describe the Trackmania series is like this: remember those Hot Wheels toy play-sets? Okay, just those think of those in video game form, with ability to defy the laws of physics—and there, that’s pretty much the whole experience in a nutshell.

The series has always been built around the idea of racing cars around impossible tracks with a sense of speed that’s just a few notches below that of F-Zero. While BurnOut and SplitSecond prided themselves on fast-paced destruction, Trackmania is all about the stunts.

Each track is hybrid combination that’s best described as being like a roller-coaster and a skateboard halfpipe. The big kicker here is the fact that you have total control. Nations Forever features a sweet track creator which allows you to go ahead and let your imagination run wild. Not only can you create your own tracks, but you can even go ahead and produce your own in-game videos and spend some time giving your vehicle a custom paint job. And if you really want to take the creative madness to the next level, you can even go ahead and add mods, which just so happen to be in quite the abundance.

The whole game is built around connectivity; in other words, the online is strong with this one. While it isn’t required, not playing online will take out practically half of the experience. You can download and upload tracks, as well as race against the ghosts of other players. The whole point of ‘Nations’ being in the title is the fact that the game also sports a worldwide leaderboard, coaxing you to challenge other players on various courses to declare who’s the best.

Madness and fun for everyone.

As far as presentation goes, Nations Forever continues to impress even today. While it isn’t as detailed as BurnOut Paradise, which was released in the same year, it’s simplistic style still manages to look good. The best part about it is that it can run just fine even on low-end systems. While bigger tracks may prove to be a bit taxing on aged hardware, you can still get away with it for the most part.

It’s great that just about anyone can play this game, especially considering the fact that it’s free. Yes, free. Nations Forever is the only fully free entry in the whole Trackmania series; entries both before and after it come with a price-tag. Really, Nations Forever is actually a compact version of it’s bigger brother called Trackmania United Forever which is built on the same system as Nations, but features more environments and different types of vehicles. While it may be the smaller package, that doesn’t stop Nations Forever from being a blast to play.

The fun of the Trackmania series continues up to this very day with a brand-new entry which will actually be released this year: Trackmania Turbo. Naturally, it looks like it will be keeping the series’ signature level of unreal madness intact as it races into a new age.

The legacy lives on.

With all that said, if you’re a fan of arcade racers, then you’ll definitely be doing yourself a favor by playing Trackmania Nations Forever. The fact that this game can still retain its charm almost a decade later, despite the fact that it’s been succeeded multiple times, is a true testament to Nadeo’s mad skills. So what are you waiting for? Download now, and enjoy the awesome!