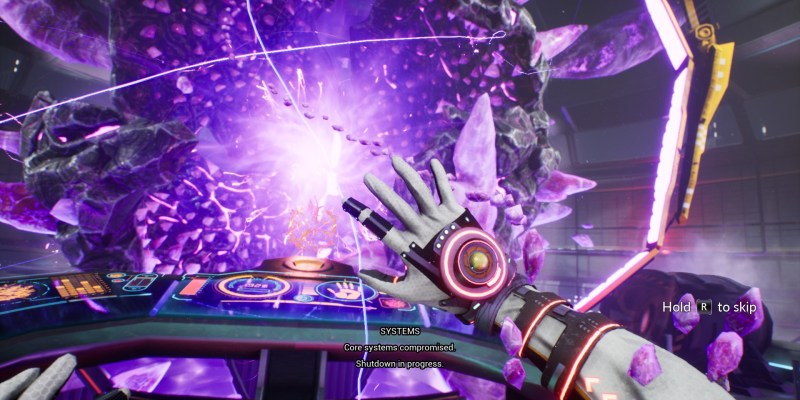 There’s nothing wrong with a puzzle game being focused around putting boxes on switches. The act of doing so is a cornerstone of the video games industry that has endured for decades. Truly, switches and boxes are the bread and butter of puzzle games. The puzzles in Relicta indeed focus on this time-tested duo, but the extreme cleverness of the game’s mechanics, excellent puzzle design, fantastic visuals, and intriguing narrative make it a must-play for anyone who considers themselves a fan of the genre.

Bright side of the moon

Relicta begins in media res. You’re placed in the shoes and gravity gloves of a physicist named Angelica Patel as she struggles to deal with a crisis. The titular specimen is causing dangerous anomalies at the terraformed Chandra moon base where she and her colleagues do all of their research. She rushes into the chamber in which it’s held with the intent of shutting everything down. But, before she can, it opens up, wraps a tendril around her wrist, and pulls her into a rift.

The game then jumps back years to an earlier training exercise that Angie participated in within Chandra’s forest biome. From there, the details trickle in and you get a better grasp of who everyone is and what’s happening to them. As with most first-person puzzlers, you’re going to be spending your time solving puzzles on your lonesome. But Angie frequently communicates with others, which mostly consists of her college-aged daughter, Kira, and her work colleague, Laia. Oh and the system’s AI, whom she refers to as “Sys.” 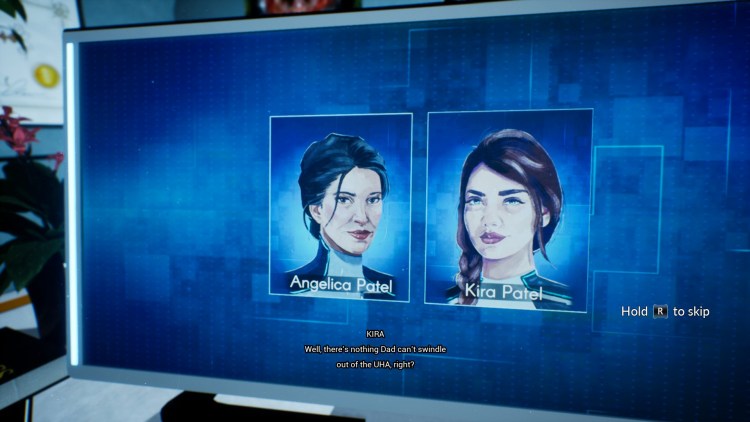 The dialogue in Relicta is extremely well written. Angie and Laia curse a fair amount and are equal parts likable and believable. It obviously helps that the voice actors are all completely up to the task at hand and deliver excellent performances. Similarly, the story, which focuses in large part on the goings-on in the base relative to the organizations funding it and manipulating its researchers is very interesting. The same goes for Angie’s dealings with the base’s AI. You’ll also find occasional logs around the base that fill in plot details that are all well worth reading. This game has a lot of strong suits, but the story and characters are worth the price of admission alone.

I can tell you what they say in space

Similar to Portal, puzzles in Relicta take place in what amounts to testing chambers. Only here, they’re all in different biomes. A forest, the tundra, a rocky canyon, a lovely beach—the environments are each spectacular-looking in their own right. Each test track—as the game calls them—is made up of a surprisingly large set of aforementioned box and switch puzzles. The general premise of these is exactly what you’d expect. You need to figure out how to get a box (or three) onto various switches in order to open your path forward.

But the way you go about accomplishing this is where Relicta‘s ace in the hole lies. Angie wears a pair of gravity manipulation gloves, with one glove being blue and the other being red. They work in the same basic way as the two colors of for the portals in, well, you know, but the specifics are totally different. All of the boxes you come across are grey by default and you can change their color at any time, as well as turning on their anti-gravity feature, which allows them to be easily moved by whatever gravitational force is being exerted upon them. 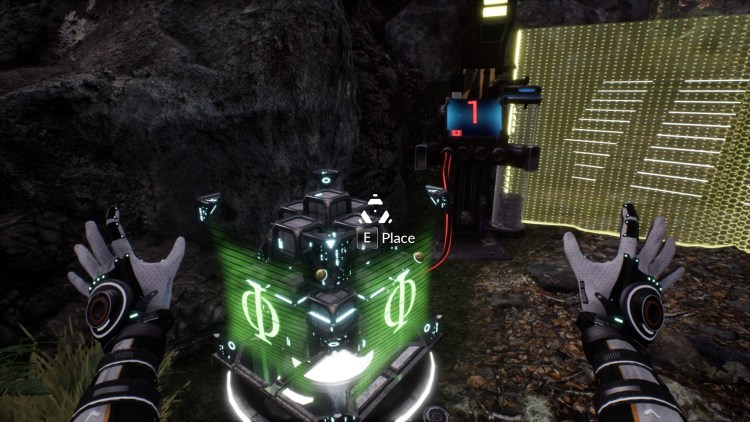 Angie can pick them and put them down, but she can’t directly slide or throw them herself. This is where the gravity panels come into play. Much like the boxes, the panels can be colored red or blue. Some are either/or when you find them and can’t be changed. To successfully solve Relicta‘s many puzzles, you’ll need to use these panels and other such devices to move the boxes where they need to go.

This is where things get a bit more complicated. Red and blue here are polar opposites. As such, a red box or red panel will magnetically attract a blue box. Similarly, a red box or red panel will repel a red box. Puzzles will require you to use boxes to move other boxes, either by attracting or repelling each other. Oftentimes you’ll need to use two boxes to repel a box towards a panel, which will magnetically attract it. Then you turn on the anti-grav feature, and the panel will lift the box up and hold it in place.

Then you’ll typically change the color of the box so that it’s repelled by the panel, which you’ll use to send boxes flying across areas. As Relicta goes on, it adds more wrinkles to all of this, such as switches that move the panels, different force fields that have various rules about what is allowed through them, and even robots that fly around and cancel out magnetic properties. 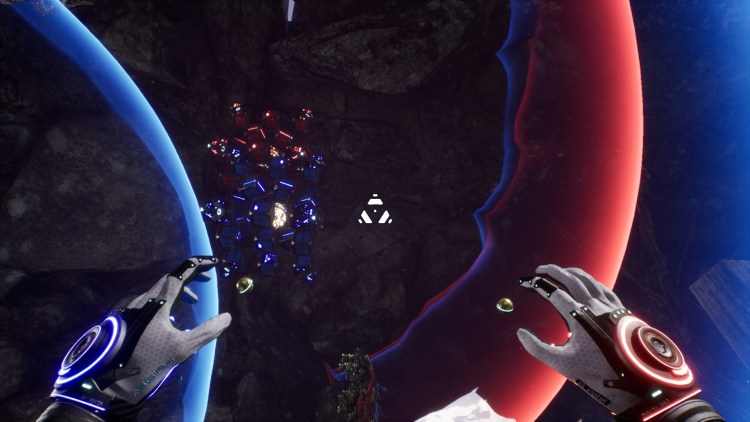 The way the puzzles ramp the challenge up while introducing new mechanics is generally very smooth. Sometimes you’ll hit a puzzle and have no idea what to do, only to have a completely new application dawn on you that changes the way you’ll play the game going forward. Relicta doesn’t explicitly teach you any of these either. You’ll need to deduce them from context. You might not realize that Angie can ride a box until it becomes the only way forward, but this is signposted by the game’s wonderful design.

Put on your thinking cap

Not that Relicta is easy. Far from it. Some of the puzzles and the thought processes needed to solve them are downright devious. The game is extremely demanding and requires you to have a  complete understanding of its mechanics and possibilities in order to keep moving. There were occasions when I could have sworn I was solving a puzzle in a way that wasn’t intended, only to realize that the game wants you to feel like that. It’s truly one of the most satisfying, challenging puzzle games I’ve ever played.

If there’s any complaint I can make about Relicta, it’s that sometimes the puzzle solutions can seem a bit too obtuse. However, they’re all completely doable without needing outside help. The game just wants you to pay attention and think. Some of the puzzles are so hard that I was amazed I was even able to pull them off in the end. This goes double for later-game examples where they come in multiple parts over wider areas and require you to carefully plan out individual moves along with requiring you to time presses of switches and pitch-perfect implementation of anti-grav deactivation. However, occasionally the physics doesn’t behave as it should and boxes will move at angles you couldn’t have foreseen. But even this is generally easy enough to rectify. 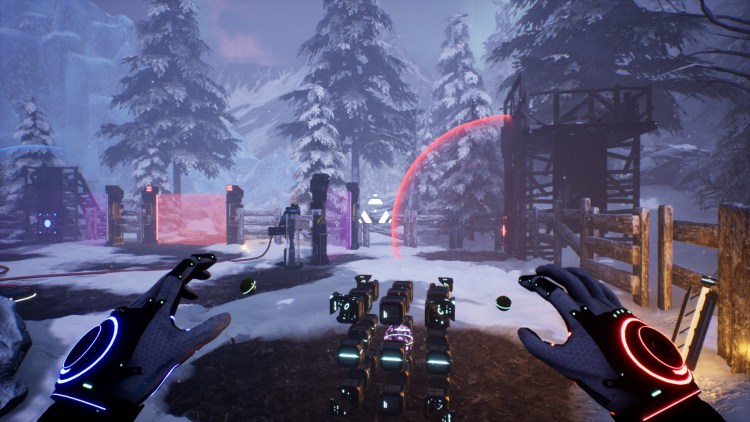 Simply put, Relicta is in a class of its own. Its design is often head and shoulders above many of its contemporaries, the writing is of the highest quality, and the game looks far better than it honestly needs to. Absolutely anyone who considers themselves a fan of the genre owes it to themselves to play this game. It’ll take you to the moon. 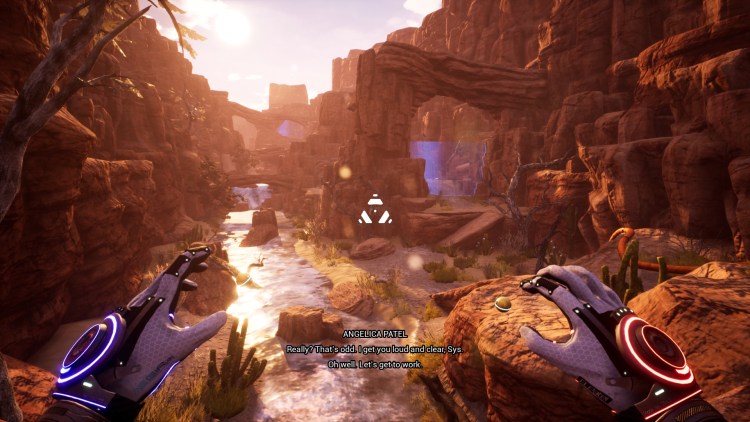 Simply put, Relicta is in a class of its own. Its design is often head and shoulders above many of its contemporaries, the writing is of the highest quality, and the game looks far better than it honestly needs to. Absolutely anyone who considers themselves a fan of the genre owes it to themselves to play this game. It'll take you to the moon.

Hellbound review — No half measures