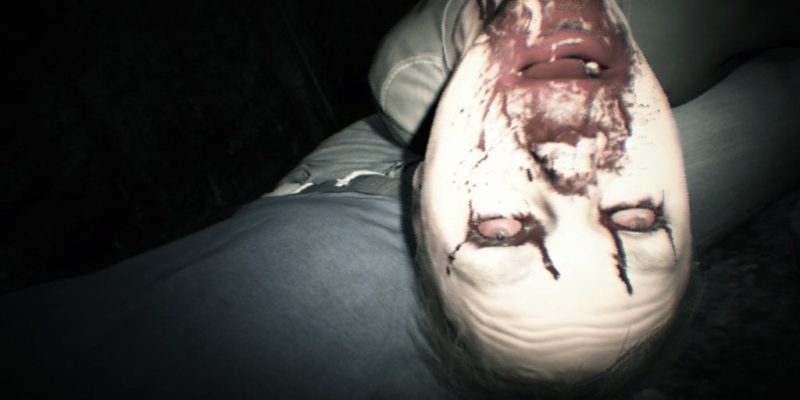 So far, I really like Resident Evil 7. And by “like” I obviously mean “fucking hate, because it’s a game made entirely of NOPE”, but you know this. I love/hate horror games. I adore horror when it’s being clever and not just jumpscare-y. It’s just that I’m a gigantic goddamn coward, so if they have anything even remotely clever going for them, they always scare the hell out of me.

So far – which really isn’t that far – I’m having a hell of a time with Resident Evil 7. 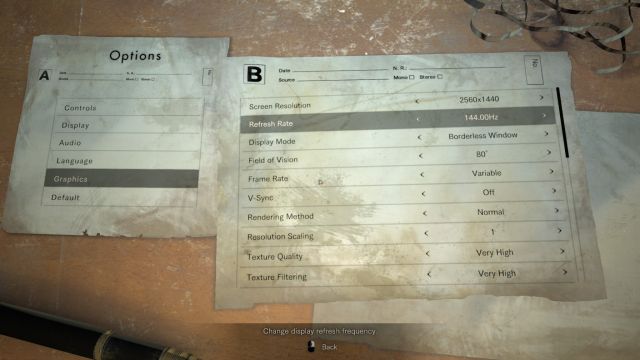 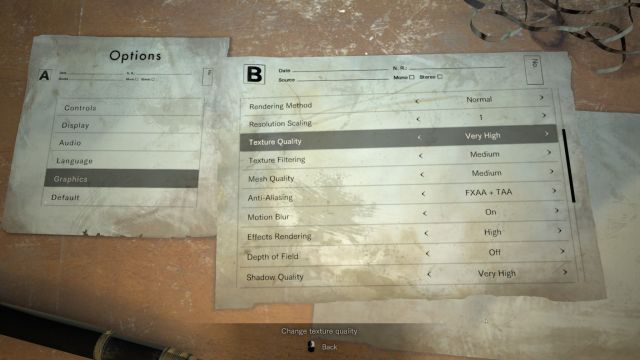 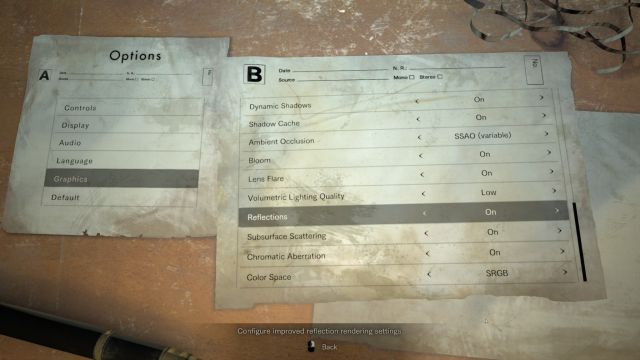 Good stuff, by and large, and with relatively detailed descriptions for some of the more esoteric options (although others, not so much; Chromatic Aberration apparently controls the Chromatic Aberration). But! Resolution goes way up, as does refresh rate. If you’ve got a monitor that can handle a game running at 144Hz, then Resi 7 appears to have you covered.

Performance-wise, it’s also pretty damn good. It defaulted to most settings on Medium/Off, but by and large raising them didn’t cause many problems. With almost everything on High/Very High (with the exception of stuff like Bloom and Lens Flare, because no), Resident Evil 7 was flying along at between 80FPS and 110FPS. Dropping the details didn’t seem to increase this by a great deal, with only a couple of frames gained per option, although the more visually intense segments of the early game benefited a little more.

There are two exceptions of note. The first is Shadow Quality: while the game ran beautifully with this on High (and, again, lowering it made utterly negligible differences), pushing it up to Very High dragged the framerate into a dilapidated farmhouse and murdered it with a shovel. In case you think I’m exaggerating, changing that one setting to Very High dropped the framerate in a graphically intensive bit from 80FPS to 17FPS, with massive amounts of stuttering and freezing along the way. It barely went above 30 even in other sections. 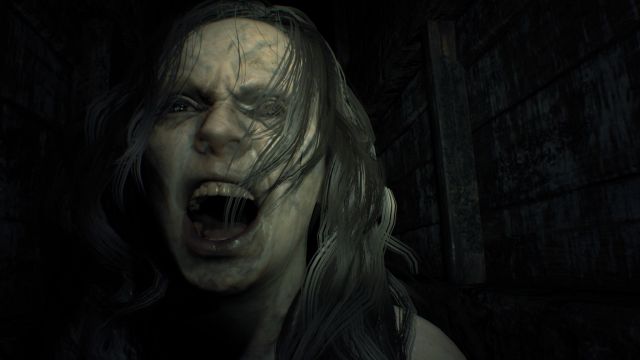 If I had to guess, I’d say this was either down to it trying to use more VRAM than I had, or attempting to make use of some sort of mysterious voodoo my graphics card simply doesn’t possess. Either way, the trade-off between High and Very High is one I’m happy to make in exchange for an extra 60 frames per second.

The other option worth pointing out is Reflections. While everything is lovely with that set to either Off or Variable, switching it to On led to some really weird visual effects, with bits of the floor and tables undulating in a way that was eerie but almost certainly unintentional. It’s not something I can really show off in a screenshot, but I thought that either they were covered in flowing water, or had something small crawling on them. Sort of like a film grain effect. Have a look at the two shots below (probably after clicking for bigger) and pay attention to the table in the foreground, and you should see what I mean. 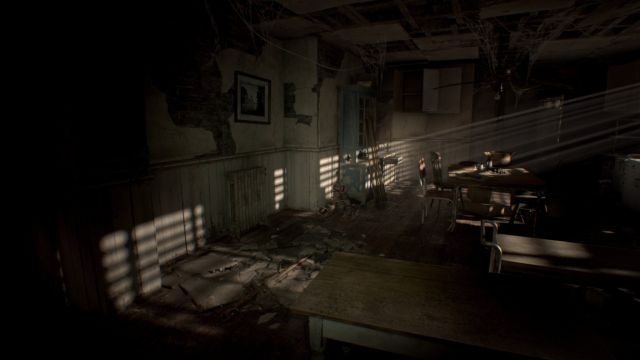 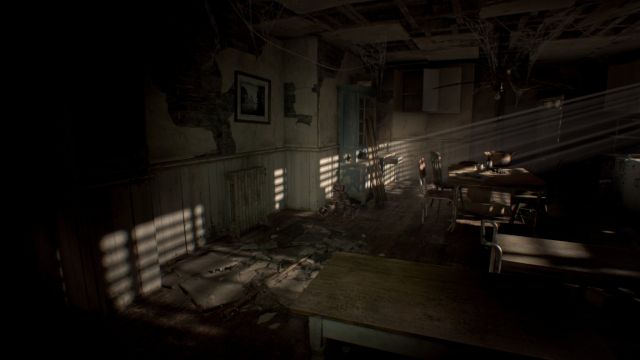 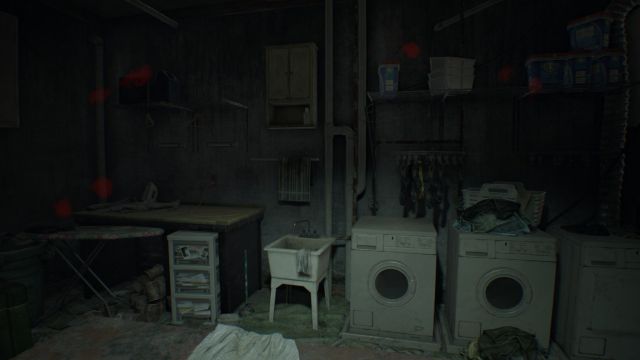 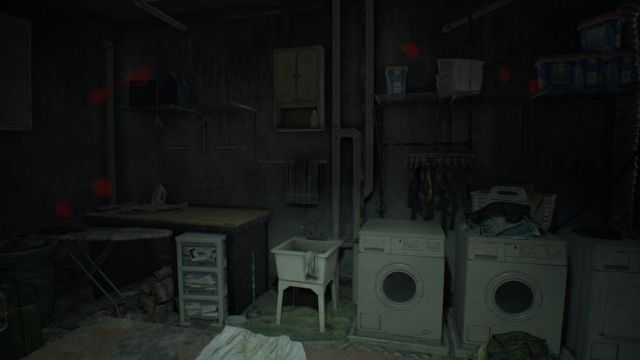 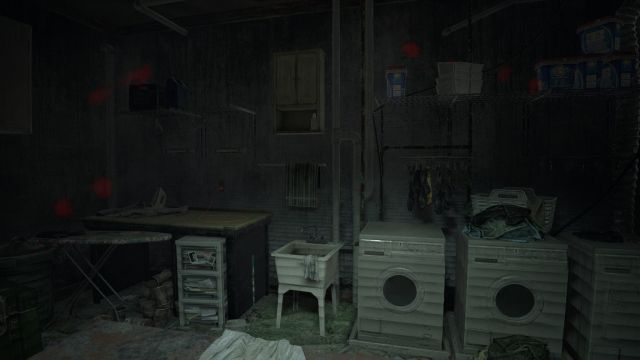 It also controls rather fine, too. The inventory interface is slightly cumbersome on mouse and keyboard (and it still contains d-pad visual prompts, for some reason) but it hasn’t caused any real issues yet, and without further play (and inventory management in high-tension situations) I can’t comment too much. Either way, the general stuff of WASD to move/C to crouch/left-click to attack is all present and correct, and offers up zero problems.

Resident Evil 7 may, however, cause some motion sickness, but it has a few options to alleviate this. For one thing, the headbob while moving can be disabled, and the FOV can be increased. The FOV itself can’t be increased too far, though – you’ve got a range between 70 degrees and 90 degrees. I suspect this is down to making sure things like people shoving grotesque “food” in your face actually covers the screen properly, but it’s probably worth the warning for those who are susceptible.

We’re starting to hit the point where I’m running out of stuff to say. What we have here is a relatively svelte game (20GB!) that runs nigh-flawlessly on upper-mid range hardware, looks really quite lovely thanks in part to its visual effects, and controls just fine on PC. In short: it’s not so much a port as it is a PC version, and from an hour’s play, it’s a bloody good one. There’s still room for it to fall apart a little bit as things go on, but short of crashes, bugs, or hideous inventory management, I can’t see it doing so much. Unless you really want to complain about the graphics, which… I mean, I guess you could? Some of the texture work – characters in particular – can be a little off when it’s truly close up. What with it being 4am I may have missed something, but right now I’m rather eager to get back into it without any thoughts of “oh, it’s a shame about…” which is usually an indication that a game is doing something right. 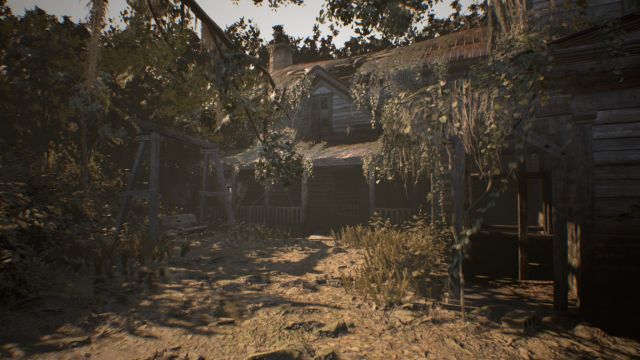 Okay, it’s a little rundown, but I’m sure it’s really quite lovely. 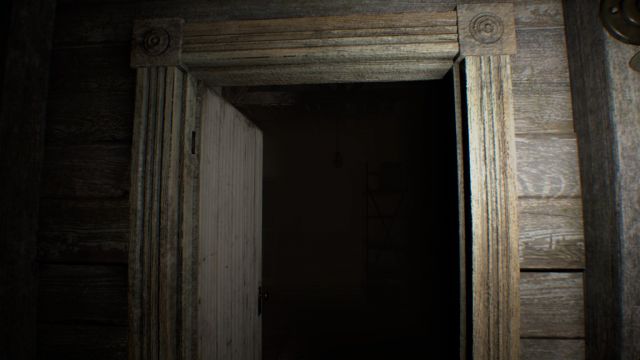 In the first hour’s play I’ve only jumped out of my skin once, but I’m okay with that because the rest of the time was largely full of dread about what might be lurking around the next corner, and that’s the sort of horror I really appreciate. When I see a dark, narrow staircase leading up to a door, I know something bad is going to happen. When I clamber down into a basement, I know something bad is going to happen. And sometimes it doesn’t and I feel safe! But it doesn’t change the fact that I was freaking out a few minutes prior, and thus far Resident Evil 7 has managed to mix feelings of utter dread with grotesque visuals and amped-up moments.

The opening segment, in general, manages regular switches from high-octane excitement to brooding tension. There’s the initial moment where you step from the bright outdoors into a pitch-black room. Then, a few minutes later, there’s the bit where you’re fending off a knife-wielding maniac with whatever the hell you have to hand.

I’m liking Resi 7 a lot, and if you’re planning on picking it up, I can think of very few reasons why the PC version should not be your first choice.

Obsidian’s Road to Eternity documentary on YouTube in full

By Logan Broadley21 hours ago
Reviews