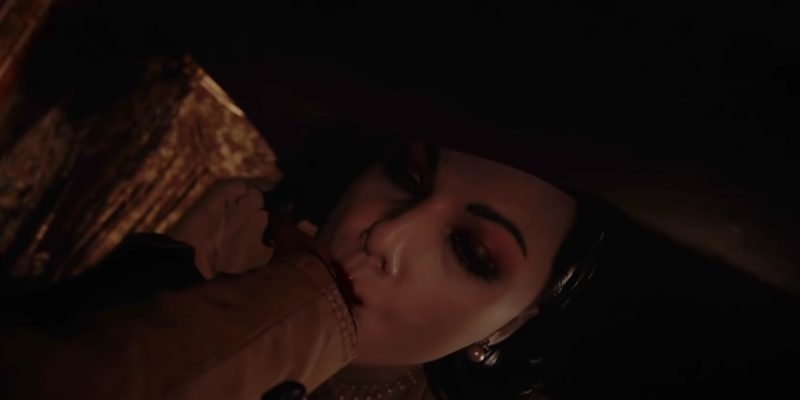 Next week’s Resident Evil showcase will also be hosted by Brittney Brombacher, who presented the last one. A video posted on Twitter announcing the showcase includes some new snippets of cutscenes and gameplay we haven’t seen before. One of these clips already has fans of the game’s lead vampiress, Lady Dimitrescu, in a tizzy in safe for work terms. In it, she slices the palm of Ethan Winters, the game’s protagonist, with a knife. She then sucks his blood straight from the cut.

However, the upcoming Resident Evil showcase won’t just focus on Village. In the video posted on Twitter, Brombacher says that “a few other surprises” will be discussed. As of right now, those surprises could be anything, even a new Resident Evil movie (though I wouldn’t advise it).

More news on RE: Verse

Moving away from Village, today’s Resident Evil showcase announcement also touched on RE:Verse, the game’s multiplayer component. For those that don’t remember it, RE:Verse is a competitive multiplayer title that puts players in control of the various heroes, villains, and bio-monstrosities of the Resident Evil franchise. Players duke it out, collecting vials of various dangerous pathogens. However, once they’re killed, players come back as biohazards like Mr. X or Nemesis to wreak havoc.

Brace yourselves for the next Resident Evil Showcase which goes live on April 15th at 3 PM PDT / 11 PM BST! Once again hosted by Brittney Brombacher (@BlondeNerd), watch the teaser below for more info, and join the Resident Evil Re:Verse Open Beta Test while you wait! pic.twitter.com/ZFNhSfztRM

The multiplayer title currently has an open beta test running, although it seems to have hit a snag. According to a tweet from Capcom, RE: Verse has run into a multitude of matchmaking issues. As a result, the test has been suspended for the time being. There were no mentions of bringing the beta test back online, though Capcom has said it will “inform you when the cause is identified and the solution is in sight.”

The next stage of the Elite Dangerous: Odyssey alpha introduces a deathmatch