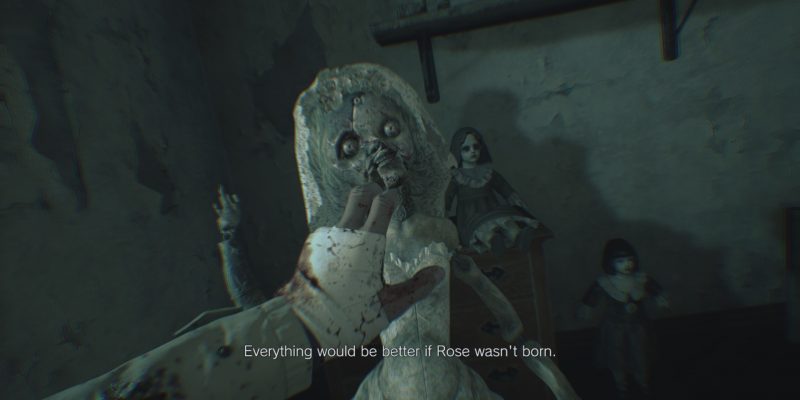 The Beneviento house in Resident Evil Village is notably different from the rest of the game. Hell, it’s notably different from most of the franchise. Instead of being a survival horror or action scenario, it’s more of a pure puzzle affair. Think of it as a larger version of that one DLC from 7 where you have to escape from that one room. This section isn’t terribly long, however, so I’ve put the entire walkthrough into this one guide. Take your finger off the trigger, because it’s time to carefully inspect a doll for a while.

In the first section, you’ll be walking a linear path. This is the upper floor of the Beneviento house and, while you can explore it, there’s nothing to find. Go through the dining room and into another hallway, where you’ll find an elevator. Go down it. Once you do, you’ll come out onto the lower floor. Leave the elevator and head down the hallway. There’s really only one way to go. You’ll go through the door and the lights will go out. When they come back on, you’ll find that the door is padlocked and your entire inventory is missing. Take the item on Beneviento’s dummy to get started.

First off, check the photo by the doll on the table. This will let you examine more of the doll. Check the doll’s left arm and take the bloody wedding ring. Check the doll’s left leg and right arm. Disassembling them will allow you to find a winding key and a silver key. Use the silver key on the door to the left of the table. You’ll see a sink in the corner of the room. Use the bloody ring in the sink. Examine the ring for a six-digit code that opens the door that is now padlocked. 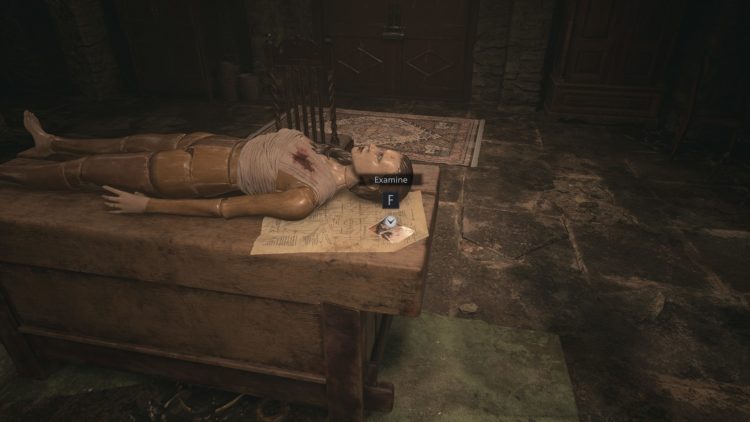 Unlock the door and go into the hallway. While you’re walking, a door will open. Go inside and use the winding key on the music box located on the corner of the table. You can try to copy the picture below to know which parts go where, but there are grooves in each piece that typically will continue into the correct one next to it. Use those to figure out the correct order. This gives you tweezers. Use the tweezers to get the film out of the doll’s mouth, then head back to the beginning of this floor where the elevator is. Go inside and use the film on the projector. 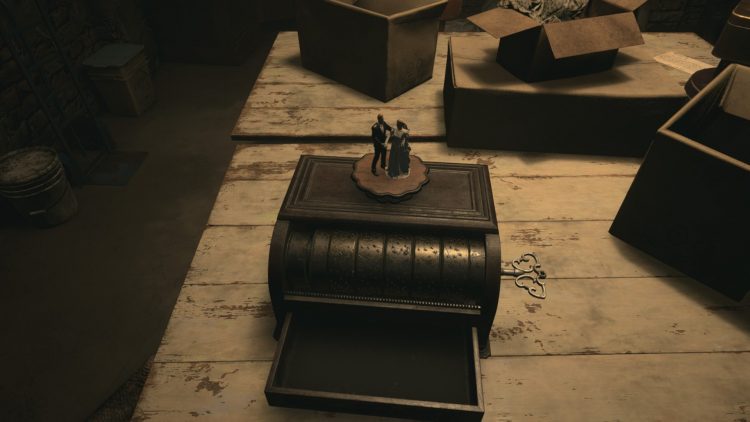 The film strips are arranged as follows: plush, book, baby, music box, and the ring. A movie plays and then a bookshelf moves to let you pass. Grab the scissors from the doll in this room, then use them on the hole in the wall nearby. Go through the hole and unlock the door at the end of the hallway, which will create a shortcut back to the room with the doll on the table. When you’re back there, use the scissors on the doll’s bandages. Then you’ll find a brass medallion. Place it in the door you reach by going down the hallway in this room. If you look at the doll’s eye, it has a crow looking to the right, so have the medallion on the left copy that. The medallion on the bottom should be three closed eyes, a la the doll’s right arm. This will open the door.

Go down the stairs and you’ll come to a well. We saw this in the movie earlier and there’s no way it isn’t a reference to Ring. Climb to the bottom to find the breaker box key, which you’ll need to use on the fuse box by the elevator. While walking there, a monster will show up. Run back to the room with the sink and use the unlocked door to run around the other way, returning to the breaker box. You can also hide in the locker, but the shortcut is faster. When it sees you, turn and run. Open the breaker box and take the relief.

Go back through the whole in the scissors closet. You can now use the relief on the door showing a mother without her baby. Go further in and find a room with a breaker box. Take the fuse. While leaving, the monster will show up again, so be ready. Run to the room you just came from and hide under the bed. Make sure and hide so that you’re facing the door. When the monster comes in, it’ll walk around the bed, giving you time to get out from under the bed and run. Once you reach the breaker box, use the new fuse, and then get on the elevator and leave. 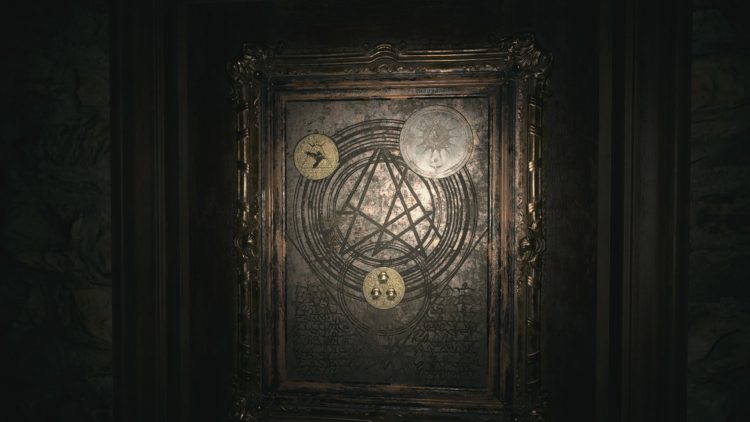 You may be out of the woods, but now you’ve got to go up against Donna Beneviento. Well, Angie, technically. This sequence stands in for a boss battle. You can die, but you won’t even get hit if you do exactly as described below. Stepping off the elevator results in Beneviento’s dummy, Angie, telling you to find her. The thing is, Angie’s locations are random. There are a few different places she’ll go, but watch where she’s going when she runs away to try and get an idea of where she’ll be.

I’m pretty sure that the first time, Angie is always upstairs, so run up the staircase and enter the door. You’ll see Angie on the floor, so grab her. Ethan will stab her in the head with the scissors he found earlier. Once she escapes from your grasp, she scampers off. There are a few places she can be. She might be sitting in front of the bookcase in the dining room, in front of the elevator, or in front of an opened door on the first floor. You need to stab her again, which will cause her to flee once more.

You’ll need to stab her one more time, so check the other locations. I don’t think she ever goes back upstairs on standard or hardcore, but I’ve only fought her once on each, so I can’t be completely certain. After one more quick stab, she’s done for and, wouldn’t you know it, so is Donna. Mission accomplished somehow. Don’t forget to take Angie after Donna crumbles to dust, as the dummy is worth quite a bit of money. Or you could keep it, in case you like that freaky thing. Now you’ve got the second flask and are ready to move on to the next Lord.