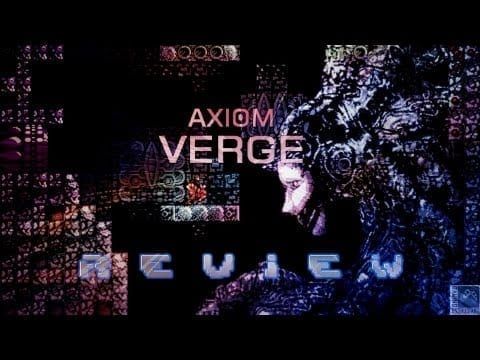 You can Check Out the VIDEO REVIEW Right Here!

The gaming scene has grown a lot since the golden days of the NES/SNES, SEGA Genesis, and Atari systems. Back then, a lot of amazing franchises were new and beginning their now legendary journeys. Two particular franchises of that time were Nintendo’s 2D side-scroller known as Metroid, and Konami’s Castlevania. The beginnings of these franchises created a whole new style of gaming that a lot of games have adopted over the years. Axiom Verge, a title in the current age of gaming, just so happens to be one of those.

Axiom Verge is a love letter to the past in pretty much every regard; from its gameplay style, to its pixelated graphics and SNES chiptunes. There’s no denying that developer Thomas Happ did some really thorough homework of the legendary classics as he was crafting this retro-inspired revival. So then, how does Happ’s talents stack up against two industry juggernauts?

In Axiom Verge you to take on the role of a failed scientist named Trace. He was conducting an experiment when it suddenly went haywire, leaving him to wake up in a mysterious alien world. Following the guide of a strange and dying robotic creature, Trace must traverse and survive the mysterious world he’s found himself in. Axiom Verge gives you a very short time to become acclimated to its controls and environments. Like Trace himself, from the very beginning you find yourself asking questions like: “What do I do?” “Where do I go?” While some games do much to explain the events beforehand (i.e. Zelda), Axiom Verge introduces you to the main plot, your character and boom—you’re off to explore. No tutorials, no long cut-scenes. It’s just you and your weapon, exploring this dangerous (and unmapped) new world.

Axiom Verge’s use of the Metroidvania style of gameplay is introduced almost immediately after you take control. You’ll encounter an area that you can’t access yet, and must find a way to progress. Just like how you would actually be lost, you are forced to explore its continually-expanding world in search for items that you need to move forward. This means a whole lot of wandering. I cannot stress that enough.

As you wander around fighting small enemies and exploring room after room, you’ll eventually come across one of the numerous weapons and abilities that are scattered throughout the game. There’s a variety of different things that all have unique attributes, which in turn gradually spice up the gameplay. You’ll find yourself learning to adapt to changes very often, that is, if you actually come across these new items/abilities in a fairly reasonable space of time.

While Axiom Verge gives you a large, gradually-expanding world to explore both high and low along with a variety of different new weapons and abilities to find and use, its pacing is undeniably broken. There’s no sense of flow. Just as if you really were Trace; you’re lost in this mysterious world with no clue as to where to go or what to do. The robotic creature that he comes in contact with chimes in every now and again, but not after what seems like forever of wandering around and busting through creature after creature in order to get to the next significant point.

When it works, Axiom Verge is genuinely fun to play.

Combined with its broken pacing is the fact that the game is quite difficult. For starters, you don’t have a lot of health, which means just a few bad moves with a fairly small enemy can easily do you in. As you encounter the many gigantic bosses, you’ll soon come to realize that they too aren’t very easy to figure out. They all have unique patterns, but their complexity combined with your already limited health makes battles frustrating. The worst part is that when you die, you must start back at the last save point. That means if the last point was six rooms before where you died; you’re going to have to traverse through that same path again in order to resume from where you left off.

That’s right, there’s no fast travel. In addition, enemies also regenerate, which means if you had any trouble getting there before, just be prepared to have to square off again. Despite these gripes, it’s not all sour milk.

The hidden weapons and abilities provide interesting enhancements to the gameplay. Even more so is the fact that you can complete the game without finding all of them, which means the weapons and abilities you gain on your quest from beginning to end might be different from your friend’s. Each new weapon/ability allows you to fight and traverse the landscape like never before. Not only does this allow you to proceed through previously inaccessible paths, but this also can make taking down certain enemies a lot easier and moving through the landscape a little quicker.

Another great feature is the controls. They all felt very responsive and were quite functional. Of course, you can adjust the setting to your liking. Interestingly enough, despite being a throwback to the retro titles, Axiom Verge is much better played with a controller instead of the keyboard. One great advantage this gives is to tilt your gun diagonally in order to take down enemies that are forward-above or forward-below you, without getting caught in their line of fire. I found this to be a very useful feature in combat, allowing me to see why a controller is recommended in the first place.

Coming off the gameplay, Axiom Verge really is a retro-revival through-and-through. The game’s visuals look like a slightly advanced SNES title which is something a nostalgic, long-time gamer would be sure to appreciate. It may be 2015, but I happened to find Axiom Verge visually attractive to an extent, particularly later in the game when Trace travels out of the dark, gritty underground world which opens up to a lush alien landscape. The retro inspiration has also flowed into the game’s soundtrack, which too sound like they would be right at home playing through an SNES console. Indeed, Axiom Verge not only plays like the classic Metroid and Castlevania titles, but it looks and sounds like them almost perfectly.

To call Axiom Verge a ‘perfect’ love letter to the legendary titles that it’s inspired from, what would be over-exaggeration. While Happ was able to capture the gameplay style, visuals and sound of the original titles, he was unable to create a game that flowed smoothly the same way they did. You’ll spend more of your time aimlessly wondering the expanse of the dangerous world more than you’ll be figuring out the storyline. This broken pacing makes the addition of a relatively deep story feel like an afterthought. Metroid’s story was explained as you visited new areas; in other words, you can say that the surroundings spoke to you. Axiom Verge features proper dialogue and even cutscene sequences, but they soon become disconnected from each other as you spend time in-between trying to progress through the world.

Despite it’s flaws, Axiom Verge is not a terrible title by any means. When it isn’t frustrating you, it’s rewarding you with a fun new weapon or ability that to a great job at spicing up the overall gameplay, as well as unlocking the way to the next plot point. While you have to go through hell and high water to find them, the feeling of locating and acquiring them is definitely rewarding.

In the end, can I honestly recommend Axiom Verge to you? Well—yes and no.

If you’re a fan of Metroidvania-style titles, then yes, Axiom Verge is game you’d more than likely enjoy. If you’re unfamiliar with those kinds of games but are still intrigued by the title itself, then head my warning—it’s all you. No guidance, just you and your trailblazing+combat skills.

When Axiom Verge works as it should, it has an amazing feel to it. Between the combat and hidden items/abilities, the game feels well-polished and rewarding. Unfortunately, all of that is raddled by a poorly implemented storyline that’s broken up by monotonous wandering and frustrating boss battles. If you’re the type to get upset easily when losing, then you’d just be torturing yourself by playing Axiom Verge. If you really think you’re ready—just watch out.

By Blake Grundman3 hours ago
Reviews

By Kurt Perry5 hours ago
Reviews