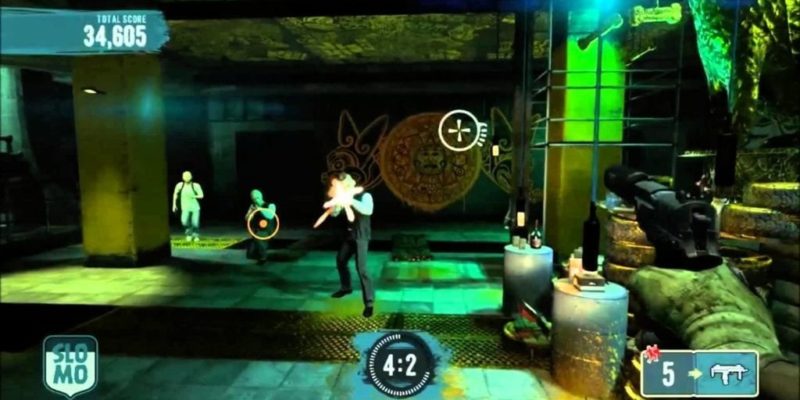 Alright wise-guys, let’s get one things straight: Blue Estate is a graphic novel turned video game. While this isn’t uncommon in the gaming world, it can raise a number of questions with regard to story and other variances with the source material. The game creates a slightly unique storytelling atmosphere with its on-rail shooter gameplay, which houses motion-based quick time events (QTE), like swiping the mouse across the screen (probably due to its PlayStation 4 and Xbox One counterparts), while still creating a challenging shooter.

Without an understanding of the previously released comics, I didn’t know how in the dark I would be about the story contents. Immediately, you are thrown into a story involving mobsters, a private detective, and one stripper whose name alone could get your mind racin’: Cherry Popz, a tattooed woman who enters Private Detective Roy Devine Jr.’s place of business. This short introduction transitions into the meat of the story as she describes how Tony Luciano, the greaseball mobster son of the infamous Don Luciano, came to her rescue with guns-a-blazin’ while imprisoned at the Twin Dragons.

It isn’t necessarily that Devine is coming to her rescue, but he’s more so explaining to the audience in his own words what the bombshell disclosed to him. Of course, it mildly interrupted his workflow as he had to put his action figures away and provide his undivided attention to the tattooed damsel. At this point, the game takes a few different approaches to storytelling. One one hand, you have Tony Luciano gracing us with his flowery language. On the other, you have Roy Devine Jr. narrating the story as to what went down, painting a far more exaggerated picture. A fourth barrier is broken is also broken having the dialogue directing us to become aware of the inconsistencies in Devine’s descriptions.

This trail of narration taps into the graphic novel roots of the game. Even while this goes down, the curtain draws, and we go from opening sequence to placing the pistol right in your mitts, ready to pump some bad guys full of lead.

Blue Estate really could have been an amazing first-person shooter experience. While it doesn’t take away from the on-rails action, the game offers only an experience along the lines of The Darkness II with its comic-arts style and emphasis on the syndicate mob lifestyle. However, the origins of the art style being within the confines of a graphic novel, it makes sense to let the story guide the character. The weapons are familiar, from pistol to pump-action shotgun, and the relentless swarms of enemies are just as prominent as they would be in the FPS genre.

From the seamless transitions in gun battles, to the use of additional power-ups, and even down to the mangled narration going on during scenes, there is a very focused attempt to make the game feel much like the comic itself. This could have gone completely awry, but the voice acting and characters are believable even in their satirical slant.

There are a lot of references to pop-culture, such as Kim Bok Sik who resembles a certain North Korean dictator. They add flavor and comedy. But, there are a few times where it is overly cliché, as though trying too hard for laughs and overreaching in the attempt. This can be heard in Tony Luciano’s dialogue or even the narrative by Detective Devine who is now telling the story in his own words. But, fortunately there’s more to the game than its writing and voice acting.

Apart from the main storyline, there is an Arcade mode that unlocks for each level. It fast-forwards through areas played thus far, challenging the player to complete each level with precision and speed. Usually modes like these don’t offer much significance or value, but this one is actually pretty fun to play. Making headshots with a deadline in mind is much more challenging than when you only have a split second to reload before more enemies start to flood the screen. The mode fast-forwards through story sequences, focusing strictly on the meat of the action. The replay value is high being that these sections are graded. Two of the sequences can be seen in the video below.

While the game seems to staple scenes together and the happenings of Blue Estate, and even after reading the available comics it feels disjointed, the game provides enough information on its own to reach some understanding of its story. There are currently only a few levels to play before the rest of the episodes become available. In the meantime, you can browse the comic and read through a separate story that involves all of the characters. From Tony Luciano, to Clarence the ex-Navy Seal turned hitman–there is much to learn about the characters whose mouths are no cleaner than the floor of a gym shower.

To cleanse your palette, the graphic style of the game is exceptional. There is a certain stylized look of each character, the environments, and vivid colors found within. The Twin Dragons opening sequence bursts with reds and yellows. Other areas, like the underground sewage passageways, offers something unique to the game while still keeping a sense of Los Angeles within its grasp.

The first game installment of Blue Estate offers a very polished look, along with decent dialogue to keep the story moving. The on-rails experience is a cross-between FPS and action game, similar to games like Resident Evil: Umbrella Chronicles or even Heavy Fire: Special Operations 3D.

The game does leave a bit more to be desired in terms of story and filling in the gaps of each character. This is expected to be learned from reading the available online comics which are included with the game. However, it does beg the question as to whether gamers should utilize these as supplemental story elements or if we should be able to digest them as is.

By Tim McDonald38 mins ago
Reviews