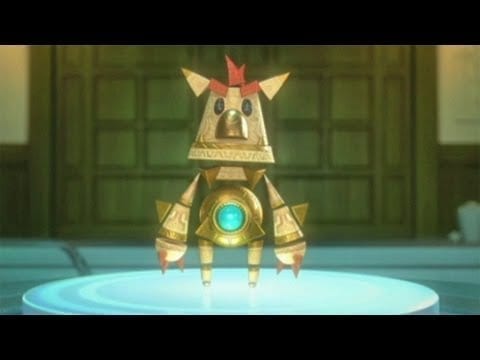 Upon completing Knack, the player is greeted with a closing credit scene of the blocky hero dancing in his various forms to How You Like Me Now? by the Heavy. It’s an amusing scene that’s reminiscent of something you would likely see at the end of a Dreamworks CGI movie. However, if you were to take a peek at the Knack’s overall Metacritic score, you would see a majority of reviewers didn’t, in fact, “like him now.” For a system that prided itself on “greatness,” it was disappointing to see one of its promising launch titles deliver such mediocre results. Even more disappointing to see the higher-ups at Sony have low standards for the game as well, as Sony Worldwide Studios Shuhei Yoshida had hope Knack would score in the mid-70s.

Despite all of this, there was something about Knack that still intrigued me. Admittedly, I kept my eye on Knack ever since the game premiered at the Sony PS4 press conference last February. Its bright, cartoony visuals and promise of platforming were a breath of fresh air to the realistic first-person shooters flooding the gaming market. So when Newegg temporarily offered it for $25, I added the game to my checkout cart without hesitation. Now that I’ve completed it, my overall opinion of the game doesn’t come close to optimism I once had for it, but it doesn’t quite match the general opinion from reviewers, either.

Knack tells the story of an exhibition team sent out to investigate an attack on humanity initiated by the goblins, who have somehow acquired technology far beyond their reach. Among the exhibition team is a scientist named Doctor Vargas, who brought along his latest and greatest creation, Knack, as a secret weapon to defeat the goblins. Made up of ancient relics that fuels humanity’s extravagant creations, Knack can grow immensely, depending on how many relics he acquires. There’s more to the story, but it all plays out rather straightforwardly with rare surprises. The characters aren’t exactly captivating and instead fall prey to their generic archetypes. Knack, the title character of the game, is the most charming, thanks to his design that shifts from cutesy to gritty when his size increases, and the corny, but enjoyable, one-liners he’ll throw out.

Even though the game director, Mark Cerny, and the developers at Japan Studio touted Knack as a platformer for kids, it actually plays more like God of War than Crash Bandicoot. To progress through the game, Knack must bash as many goblins as he can from point A to point B in a fashion similar to classic beat ’em ups. The only thing missing that would make that comparison complete is if Knack had a giant flashing red arrow to tell players where to go after they clear the area of enemies. There are a few platforms to jump across, but you’ll find yourself brawling most of the time. The strong focus on combat isn’t a problem in itself, but the way Knack executes it is where the game suffers.

You’re given a set of standard moves and a few special attacks to defeat your enemies — and that’s it. After mastering the game’s tutorial on how to hit, jump, and dodge, there is nothing else to really learn. Without any move upgrades or power-ups to spice up the combat, pressing the X button over and over again to punch out goblins becomes repetitive. The simplified combat and controls comes from Cerny’s direction, as he eliminated use of the PS4’s shoulder buttons because kids couldn’t reach them and focused squarely on the four face buttons instead. It’s an admirable approach, but one that comes at a heavy price, as Knack’s limited moves hinders any potential for excitement in combat.

Even with the simplified controls, things aren’t 100% perfect. Knack’s air homing attack, for example, can either miss the target completely or fail to travel as far as intended. It’s a problem the early 3D Sonic the Hedgehog games faced and fixed in later releases with an on-screen targeting system. Another problem with the controls is the lack of any for the camera. Because the right analog stick is used for dodging, you can’t change the direction you want the camera to face. The game tries to rectify this with a fixed camera on every area and, to its credit, it’s serviceable. With that said, there are still moments of being unable to see exactly where you’re going, or where the enemy is attacking, resulting in death.

There’s irony in Knack presenting itself as a simple game for kids, as there are great moments of frustrations here that would make any adult player throw their DualShock 4 controller out the window. For a game driven by combat, a selection of diverse and formidable opponents are a must. The enemies in Knack are diverse, ranging from colorful animals, nasty goblins, to slick killing machines. They even have distinct attack patterns that prevents the player from simply rushing into them. However, they also have cheap, one-or-two-hit kills that’s effective on Knack at any size, cheapening the difficulty. So expect to die from seamlessly innocent hits and retreading certain areas more times than deserved.

The game does have its high points. While the platforming never goes beyond what’s been done in video games in the 90s, a few interesting scenarios and puzzles help keep interest alive in the game. There are also gadgets and crystals to collect throughout the adventure that fixes some of the complaints about the dull combat. True, completion of one of these mechanics takes too long and there could be more variety in their uses; however, I won’t deny having more fun with the game once I unlocked the Combo Meter to strengthens Knack’s attacks or increase the amount of sun stones he carries that fuel his special moves.

Unsurprisingly, Knack changing form is where I had the most fun. Throughout the game, he will grow as high as a monster in a Godzilla movie, cover himself in icicles like he’s Old Man Winter, shrink himself to bypass lasers, and more. Now, even though these forms aren’t fleshed out as much as they should be, these short moments of bliss do provide thrills for when they’re present. Not equally thrilling for all forms — Ice Knack isn’t very different to play, aside from a larger health bar, for example — but thrilling nonetheless. Smashing and thrashing everything around you as Giant Knack is particularly enjoyable.

Boss battles provide a nice challenge, despite the occasional cheap hits they deliver. The final boss, while frustrating, had the right amount of difficulty a final boss should have. On the subject of sound, the voice acting is acceptable. The game’s background music is also pleasant to listen to, although missable at times. The sound effects from the DualShock 4 speakers whenever Knack absorbs relics like a Katamari Damacy creature made up of LEGOs is oddly enjoyable. Visually speaking, Knack is a delight with its simple, but appealing designs. I usually try to stray away from describing anything cartoonish as something that came straight from a Pixar movie, but Knack makes it incredibly hard not to make that comparison.

To answer the question posed by Knack‘s ending credits, I did “like him now.” However, the enjoyment I got from the game was not easily obtained. It’s a shame. Knack has some strong points, but its negatives make it hard to recommend to anyone at full price. At a discount, Knack is worth playing for anyone interested in its premise and gameplay. It doesn’t do for platformers what Spyro the Dragon or Jak & Daxter did for their respective PlayStation consoles, but Knack is a decent diversion on the PS4.

Tom Sparks and the Quakes of Ruin Alpha Preview

By Kevin Foley23 hours ago
Reviews