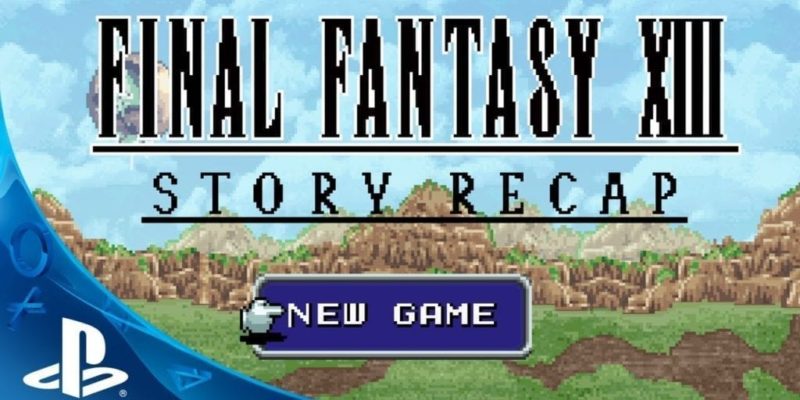 Lightning. Connotation suggests that the character in its likeness elicits a strong response with gamers. Empowering, beautiful, strong, or just bland, shallow, and style over substance, all have been used to describe the titular matriarch. This is Lightning’s game and after fans claimed there wasn’t enough of her in the previous sequel, the star returns to play dress up, wield god like power and save our souls.

Blamed for the downfall of a series, its death even, the third game in the Fabula Nova Chrystallis saga heralds the conclusion to the most controversial chapter in Final Fantasy’s history. Amidst all the hurt feelings, betrayals and perceived sacrileges against the franchise, has the trilogy finally succeeded in validating its creators original vision? That depends on who you ask and by turning an already divisive formula on its head, Lightning Returns alters yet again what we know as an RPG today.

Three games removed from the original, Final Fantasy is still ever changing. Not content in staying within the confines of a typical RPG, everything here breaks the mold. What was once a linear corridor — a design eased  in the sequel– is now a completely open world for you to adventure through past a short prologue. Saving as many souls before the world ends is your task and you accomplish this by doing quests of all sorts under an ever present clock. Completed quests, be they of the main variety, or the many iterations of side offerings throughout are the worlds salvation. Do enough of them and you’ll buy yourself another day on the tree of life Yggdrasil, extending all the way to a possible goal of 14 days before the end of the world, increasing your stats in the process.

At the onset long time fans may feel overwhelmed by all this new freedom and with XIII being an exercise in point A to B linearity, it’s now an ever changing night and day cycle, full of do anything and explore everywhere. It’s actually daunting, and with the ominous countdown to doomsday, may seem restrictive initially. What may seem limiting at first, soon becomes an afterthought once you grasp the intelligent game cycle.

Yes “intelligent”, not a word often associated with the XIII trilogy, but the more I played the game, the more the change in creative mindset grew on me. Pushed forward, but still having time to take in the sights, the clock ends up being more gift than curse. Everything is different from where it began and like Square’s admirable reconstruction of Final Fantasy XIV, it’s an attempt to write the wrongs of  the original. While this is a Square RPG game through and through, you can see the finger prints of another surprising entry into a storied franchise, that being A Legend of Zelda’s Majora’s Mask. While there are many tangible difference, the similarities amongst many of the core concepts is hard to ignore and both deviate from the expected paths of their predecessors.

“Yet what may seem limiting at first, soon becomes an afterthought once you grasp the intelligent game cycle. Yes “intelligent”, not a word often associated with the XIII trilogy”

Whether we want to admit it or not, change in Final Fantasy is constant and nowhere is this more apparent than in the combat systems throughout the franchises lifetime. Traditional turn based elements, Active Time Battle, character swaps, Paradigms and Gambits, to pseudo MMO combat. Square has always tried to flip the script on what we’ve come to know as battle systems in our RPG’s and Returns is likely the biggest about face yet. What was once a three character party — or a variation of — is now  a Lightning fueled, outfit changing (known here as Schemata) action RPG. It’s similar enough to the initial evolution and retains the stagger mechanic, but now places more control in your hands. Simply mashing one button to attack won’t work anymore, so if gameplay is paramount in your experiences, you’ll be surprisingly fulfilled and challenged.

Schemata is an evolutionary nod to Final Fantasy X-2’s Dress Sphere system extending to your battle commands as well. Infinitely customizable, all the Final Fantasy job and class mainstays are there to be discovered. There’s a strategy to your garments, as well as a limit of four abilities per outfit, so plan accordingly or you’ll be in trouble early and often. Add status enhancing accessories as you go, or aesthetic altering adornments such as a floppy Black Mage’s hat. The pre-planning and designing is all done in the easily navigated menu. Once your outfits are set you’re ready, at least until you unlock the next Schema to play with. Combat, and the planning that goes hand in hand with it are the best parts of Lighting Returns.

Other godlike mechanics come into play in the form of Energy Point (EP) consumption, accruing as you progress through the adventure. The ever valuable Chronostasis will be your go-to saviour ability, sparing you precious minutes as your explore what’s left of the worlds four expansive areas. Other saviour powers are at your disposal, but due to limitations in your EP, aren’t exploitable. Overclock will freeze time in battle allowing you to extend a difficult enemies Stagger state further, while more mundane acts such as Curaga and Arise are there if need be. Other surprises await, but always keep a few EP handy for a trusty Teleport should you need to get somewhere quick before the clock strikes 6am. Why 6? Because that’s when the time space needs to reset, or something like that and you’ll be whisked back to your hub world with the ever chatty Hope Estheim to help you.

Speaking of Hope, he has a lot to say — about everything. Truly, he’s borderline annoying at times, but at least his quick tips and pop-ins were varied enough and serve the purpose of keeping you on track, all while reminding that you’re on the clock. A little less Hope would have gone a long way though. Previous main characters and nemesis’s alike pop in as fan service as much as serving the story, while the extent of the lore that the previous entries had been built upon is now mostly forgotten and washed to the side. A puzzling decision that ultimately will be left aside due to how little impact the story leaves upon us.

Sadly as well. the Ark hubworld is rather devoid of anything. Despite existing within an artificial moon and possessing the mysterious tree of life, Yggdrasil, there was potential for more to be done here and could’ve added a nice complement to the hectic world traversal that makes up the majority of Lighting Returns. Instead, returning to the Ark only serves to break up and disrupt the flow, nothing more. At the very least, it gives finality to a full days work; being the saviour isn’t easy.

“Combat, and the planning that goes hand in hand with it are the best parts of Lighting Returns. If gameplay is paramount in your RPG experiences, you’ll be surprisingly fulfilled and challenged.”

Rather than completely tear open old wounds, I’ll summarize that the original Final Fantasy XIII, for all it’s visual splendour and sublime soundtrack scoring, was a beautiful mess. Problems aside, it remains one of the stand-out graphical showcases of the last console generation. There was a trade-off though, as its beauty ended up as fools gold, leaving us with a forced story, nonsensical terminology and a shallow cast of characters that were very tough to emotionally invest in. Final Fantasy XIII collapsed under the weight of its own ambition and eventhough the sequel did an admirable job salvaging what it was left with, the story, world and characters were almost beyond repair. This is what Lightning Returns is saddled with and to that end, suffers in lieu of.

As someone who could never accept the original game as anything but poor design, XIII-3’s world, and all that encompasses it is an acquired taste that admittedly a minority will share. If you weren’t invested at the stories onset, the finale will not change your mind. One thing the world does nail though is that it feels alive. Yes there are a hilarious amount of AI hitches with characters often sprinting here and there for no reason, but these places feel lived in and alive. Their constant dialogue to you, and to eachother is relevant to the goings on of your adventure. Coupled with the overenthusiastic guidance of Hope, should you ever feel lost in Lighting Returns you have only yourself to blame.

Righting the wrongs seems to be the goal, but once again, the trade-off’s rear their head. With the openness of the new world, Returns lags and chugs noticeably behind in the visual department when compared to both the original and previous sequel. Don’t get me wrong — this is not an ugly game at all and still impresses visually when matched against its peers in the genre, especially in combat, but the graphical differences are jarring after the standards set previously. Yes the world is bigger, but the graphical scale of the world and settings is smaller by comparison.

The juxtapositions add up even further when you take into consideration the recent series recap Square put together in the old 16 bit vein. The wonderful video suggests the developers had begun to recognize some of the short comings in their trilogy and had a little fun. Yet, Lightning Returns is a bleak, almost sad world, who’s weight will vary on how invested you are in the trilogy. At every turn there is regret, introspection, loss of hope and a crushing sense of finality of what’s to come. If despair was the goal, this finale succeeds at achieving it even with the promise of rebirth.

Thankfully the soundtrack is around to make the world a bit more bearable, living up to the trilogy’s standard and continuing to impress, even with the absence of revered composer, Nobuo Uematsu. As much as I’d like to see him return for another mainline entry someday, with what we’ve heard out of these three games, the audio endeavours of Final Fantasy are in good hands. The XIII saga has provided some of the strongest and varied scores in recent memory.

No matter the strengths and weaknesses put forward though, your ability to truly enjoy Lighting Returns hinges on your feelings towards its main character. For the naysayers, she’s as hollow and stiff as ever regardless of the weak plot point given for her behaviour. To the fans, she’s still a well-designed character that isn’t without her flaws, but who isn’t? For me, she falls somewhere right in the middle; not entirely lovable or despised, Lighting is the epitome of everything this trilogy has come to be about, good and bad.

Refusing to play by the rules once again, this daring, even brave take on the most controversial entry into Final Fantasy’s history is an unpolished gem.  For every strength, there is an equal disappointment, but I couldn’t help but admire the effort here. In a time when the developers seemingly could do nothing right, they didn’t shy away by playing it safe, delivering a stubborn and uniquely enjoyable finale. This is is Square Enix’s Majora’s Mask in nigh every way and ultimately, will be just as divisive when it’s all said and done. Now more than ever though, it’s time for Final Fantasy to move on and put Lighting behind them.

By Blake Grundman7 hours ago
Reviews

By Steven Wong8 hours ago
Reviews