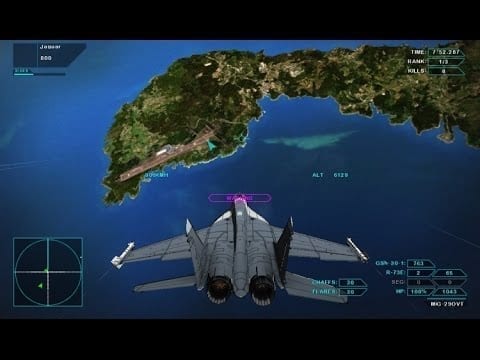 At first glance, Vector Thrust is a cel-shaded, stylized flight simulator with some cool lookin’ planes. The game is no doubt ‘eye-catching’ in its presentation. Admittedly, that was the first thing that got me interested in the game. After seeing some gameplay drummed up on a YouTube reel, this was a game I had to play—and review.

But alas, here I am jotting information down about the game, coming up with a shortened list of positives that make the cut.

A flight simulator, or flight game in general, will usually push the limits for immersion with some variable of flight mechanics. Whether it is the addition of a flight stick to deliver that sense of realism or the history acting as the backbone to the game, the goal is usually to deliver a sense of “Yes! This is what it’s probably like to fly an  airplane!“. However, in the case of Vector Thrust, the artstyle up front provides a cel-shaded, ’80s cartoon feel—and isn’t a bad thing.

I took so many screenshots during flight of the various planes. There were times where I was so drawn in to the plane’s architecture that I forgot I was about to enter a group attack on a fleet of bombers. While it the art direction might indicate a hint of minimalism, the actual product is evidence of the contrary.

Even the underside of planes reveal detailed flaps, lines, and armed payload. Some areas, like the first flight scenario “Attack on Magatsu”, shows off land and sea while naval ships fire away. Flying closely to these ships delivers tense moments are you barely graze them. It would have been neat to see water flare out to the sides as you zoomed by, further driving the artstyle of the game. Instead, bullets don’t impact or show on any terrain much less the jet engines soaring by. I would have liked to see more detail in the land structures, leaving more to be desired in the missile silos and details.

While the design of the in-game planes and other crafts are done well, they do become more a distraction to hide the rest of the game.

Vector Thrust seems like it did surpass expectations and made its way out of the chains of Early Access. Even so, a full victory shouldn’t be celebrated at this point. One of the main areas where I found my struggles was in the part of the game that should have been the most comforting in terms of becoming acclimated to the pilot’s seat. The storyline is intriguing, however, the gameplay itself suffers from, well—itself.

I found the entirety of Vector Thrust to be very lopsided. On one hand, you have a customizable online experience, with Quick Action that you can drop into with other players. On the other hand, you have a storyline that isn’t very interesting, suffers from poor voice acting, and doesn’t meet expectations in terms of providing an attainable challenge to conquer. For starters, there were instances where the entire mission was completed as specified in the briefing. When it came for the mission to conclude, all planes on the map were left circling in a small corner of airspace.

The other area where the game suffers from aforementioned lopsidedness is in the unlocking of planes. For whatever reason, planes unlocked in various areas can only be used in their respective modes. So, if you unlock more planes in the Battle Scenarios, they do not become available in the story. As well, points that are unlocked here cannot be used in the story mode. This wouldn’t be so much of a problem if other sections weren’t more fun to play than the actual story itself. Even with modding tools available, they almost become irrelevant for the pool of people who simply want to complete the game in its “as is” state. Or, are we to think that the game isn’t for us who think that?

If there was a cure for Vector Thurst it would be this: get rid of the storyline. The game would have done minutely better if this was taken out entirely, had more emphasis on the massive lot of planes available, and focused more on the missions online that can be played with one another.

I often found myself frustrated, tired of doing the missions over-and-over, or replaying the same mission for minimal points. I couldn’t purchase new planes after playing through twice nor could I buy additional of the same ammunition based on payload capacities. That doesn’t include the times the game suffered from a bi-polar difficulty, one in which you cannot adjust.

If you want to know real frustration, try playing a mission just to get to the last plane only to be shot down for following too closely. Or, you find out that you only have a limited payload and are out of missiles. It would be fine if the AI that was in your squadron was accurate more than 30-percent of the time. But I digress.

Vector Thrust places its focus on being able to customize levels, the amount of planes available in-game to unlock, and boasts a lengthy storyline. However, much of the quarrels with the game itself stem from broken AI and a lopsided difficulty.

Levels become unplayable, as in the first few missions due to AI pilots firing inaccurately, and the missions not concluding after all enemies were destroyed. This becomes a quarrelsome combination considering you are flying the same plane repeatedly having not being able to unlock any others due to not acquiring enough points. This also limits missiles in your arsenal, another area where the fun is taken out from under you in this flight sim.

The move for Vector Thrust to exit Early Access should have been pushed a bit further out, focusing more on refining the single-player experience. If not, then it should have been nixed altogether, leaving a more enjoyable online multiplayer endeavor. I couldn’t help but wonder why so many planes that were so fun to play were found here right away and not in the storyline.

It’s sad to say but Vector Thrust only looks cooler than it actually is.