Last November, Valve circulated some new rules and guidelines about the intended use of Early Access. Perhaps realising that there were a few too many games in the system which could be scientifically categorised as a load of never-to-be-finished old shite, it seemed the company were attempting to clean house.

Here’s one of the guideline (rather than rule, sadly) statements: “If you have a tech demo, but not much gameplay yet, then it’s probably too early to launch in Early Access … You might want to start by giving out keys to select fans and getting input from a smaller and focused group of users before you post your title to Early Access.”

Richard Nixon’s After Reset, price tag $50.00 USD, is what Valve had in mind when they wrote those words. 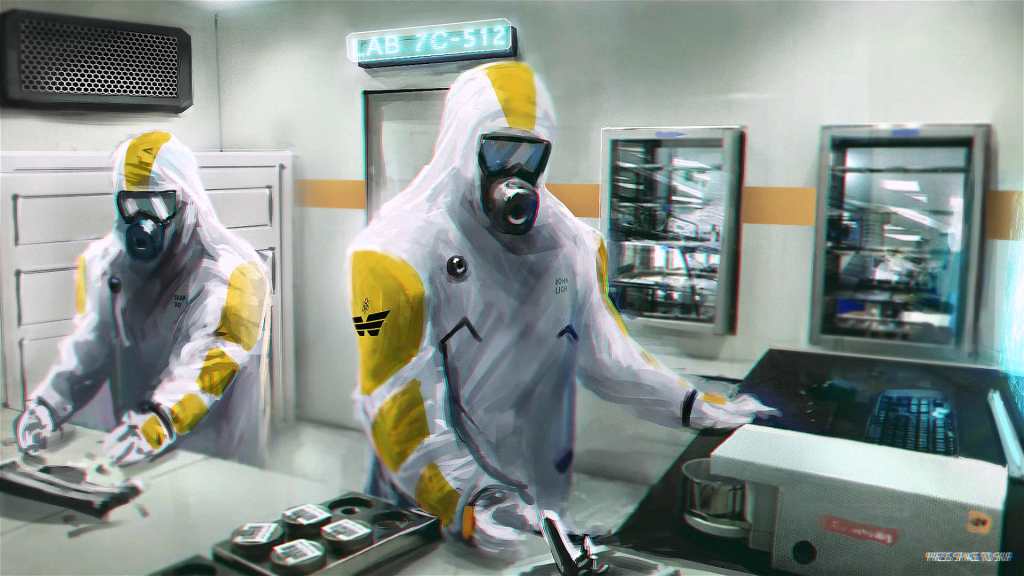 To get the obvious out of the way, you should not be paying $50 for a copy of Richard Nixon’s After Reset at this point in time, or any time in the near-ish future. The projected date of completion stated on the game’s store page (and fair enough, they’re not hiding this) is 2017/2018. There might be a prologue section finished by Q2 2015, but based on what’s present in this initial build I wouldn’t hold my breath for what that will contain.

Anyway, this game has a somewhat interesting history. It initially showed up on Kickstarter in 2013, looking for $900,000 USD in return for a traditional RPG in the manner of Fallout, Baldur’s Gate and the like. That goal was not met. A ‘rebooted’ Kickstarter appeared in 2014, asking for $35,000 USD to just make a prologue section instead. That made $94,000 USD.

Now we’re in 2015, and Richard Nixon’s After Reset has hit Early Access. Except not really, because there’s basically nothing to do in it yet. 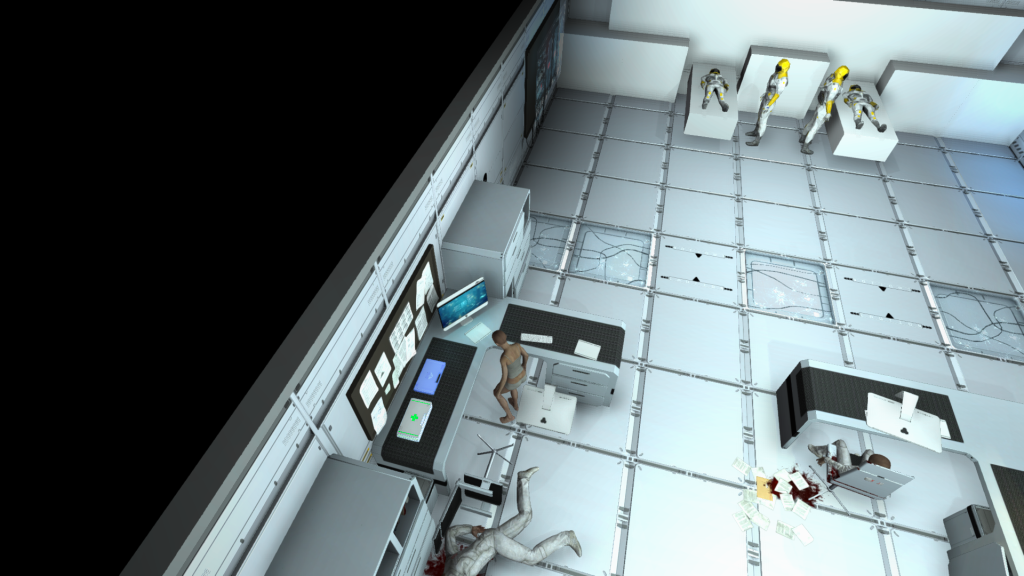 The blue highlight makes it look as if you can interact with this object in some way, right? Put those dreams to bed, sweet child.

It puts on a convincing face, at least. You get a still-image intro sequence with half-decent voice-over telling you all about the uniting of nations, amazing scientific advancements, surprise alien appearances and (whoops) spontaneous detonation of nuclear devices. There’s the odd grammatical misstep which hints at a second language, but it’s otherwise alright.

The title screen looks okay too, but does have a pretty irritating “the monitor you are viewing this on is old and going a bit wrong!” screen-noise effect. This persists all the way through character development, which isn’t ideal when you’re trying to read about stat bonuses in grey text on a black background. A text scaler in the options menu helps to mitigate this a little bit.

Character creation is where Richard Nixon’s After Reset really starts reminding you that it’s an Early Access game. You can choose any species and race you like, as long as it’s Human and Pastager. A bit of a shame, because the chance to become an Incorporeal Deviant or Plant Stalker sounds like a right lark. Maybe in 2018, eh?

Popping points into the six base stats (Strength, Agility, you know the drill) and selecting alignment, skills and feats is a relatively complete process though. The latter feats are taking clear cues from Fallout, with most of them offering buffs or bonuses alongside a negative consequence. “Darling of fortune,” for example, makes you less likely to be hit, but means the character’s over-reliance on luck through the years has made them sloppy with weapons training (making it harder to hit others.) 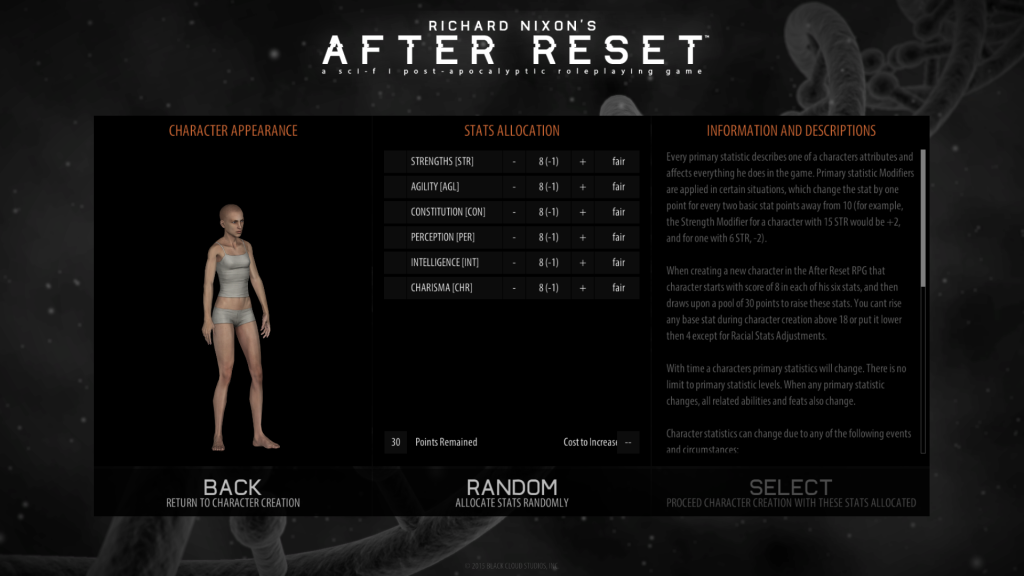 Choosing your base stats appears to be one screen that is 100% feature complete. Hurrah.

Had Richard Nixon’s After Reset been released to Kickstarter backers as an alpha/beta look at how the character creation tool works, that would’ve been fine. Instead, it’s on Early Access for $50. And the (unfinished) character creation bit is pretty much the only meaningful thing you get.

After another brief animated intro bit, and some more voice-over placing you within a mysterious medical facility, you get to experience the incredible gameplay on offer in this build. Thrill! As you limp your wounded character around the rooms extremely slowly. Gasp! As you’re able to highlight objects but not interact with them in any way. Wig the fuck out! When you discover you can also zoom in and out with the mouse-wheel.

That’s it. That’s what you can do. For maybe ten or fifteen minutes.

I’ve counted the rooms in the facility. There are thirteen of them. Two are non-functional elevators, another pair are small toilets. I also included some large corridors as rooms because I was feeling generous. 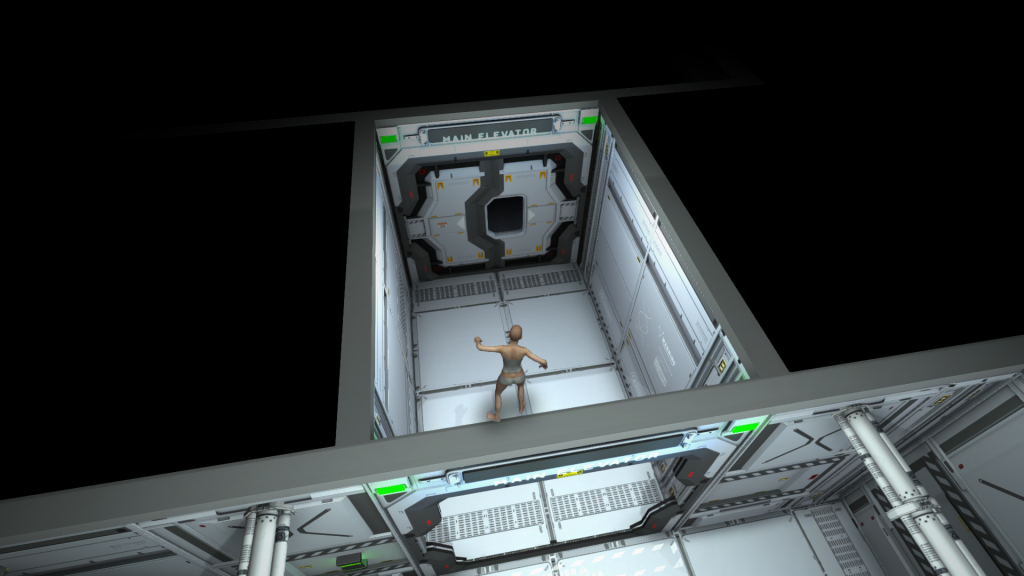 Look at the woman’s left heel to enjoy an MC Escher-esque perspective trick.

Other 90s-styled RPGs have used Early Access to fine effect. Divinity: Original Sin gauged opinions on that game’s opening area (a term which doesn’t quite convey the 15-20 hours you can easily spend there) and attributed “the level of polish and complexity present in [Original Sin’s] current form” to the Early Access process. Wasteland 2 gathered feedback on their own Early Access beta, which consisted of the first half of the game.

So Early Access isn’t entirely the problem here. The problem is Valve’s casual attitude (new rules or not) about what gets on there, and studios taking this route before their game is even out of its foetal stages. I’m loathe to put the primary blame on anybody who pays for this and gets burned, because while there’d be some responsibility on my shoulders if I bought this, I’m also someone who writes about this stuff for a living. I’ve been around the Steam block a few times. I know the warning signs.

For people newer to Steam, used to more traditional exchanges of money for goods and services, the concept of shelling out $50 for a game with barely anything in it that might be out by 2018 is going to be pretty alien. They might not even consider it a thing which could happen. Until it does. Then it’s off to Valve’s byzantine customer support system for a shot at the Steam refund lottery. 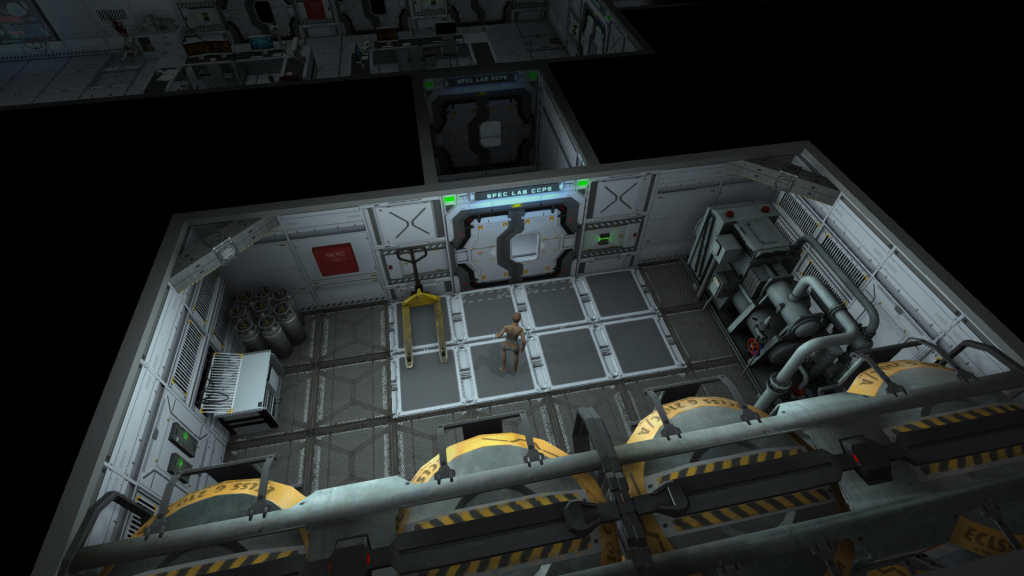 You are looking at roughly 7.7% of Richard Nixon’s After Reset in its current form.

At the time of writing, Richard Nixon’s After Reset gives you a menu screen, an intro, a character creation tool and a slow, boring tour around a small set of medical facility rooms. For $50. If it comes back later in the year with a little bit more game to show then it still probably won’t be worth $50, but at least it’ll be able to make a better case for itself.

The game might, eventually, turn out to be … something you can actually play. I don’t know, I can’t predict the future. But there’s also a significant chance that an RPG project as broad in scope as this one will not be completed. The Kickstarter (by its own admission) only raised funds for a prologue chapter, so who knows where the rest of the money will come from. Hopefully the studio aren’t banking on Early Access to pay their way through the rest. That way lies madness, probable failure and direct contravention of another Early Access guideline: “Don’t launch in Early Access if you can’t afford to develop with very few or no sales.”

If Richard Nixon’s After Reset is still around in 2016-2017 (assuming the world hasn’t gone through an actual apocalyptic event by that point,) maybe check back with it and see how the Early Access version is coming along. At the moment there’s very, very little to be gained by playing the game which couldn’t be learned by just looking at the screenshots in this article. It is, frankly, taking the piss.