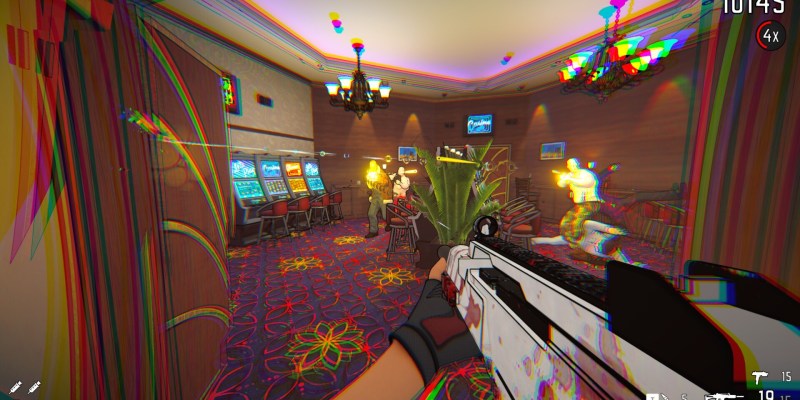 Dredd and The Raid: Redemption are both great movies about the main characters battling their ways through entire tall buildings filled with criminals. RICO, the 2019 original, was a game that focused on cops busting into compact buildings, eliminating everyone inside, as well as interfering with their criminal operations. RICO: London, though, is like a mix between these two things, but with a spotlight on score attack and copious amounts of janky bullshit. Tim also passive-aggressively added that it’s like Die Hard, which it is. There, are you happy?! While the first game had a lot of kicking in doorways followed by entering slow-motion and blowing everything in the next room away, that’s all London does. It has its charms, but it’s light on content and needs some serious polish in spots.

If you played RICO, you might recognize RICO: London‘s protagonist, Kate, the English woman prominently featured in the game’s opening cutscene. Back in her native England, she’s one of those cops who busts into places and operates in a way that can only exist in fiction. Along with her partner, and against her superior’s instructions, she slaughters her way to the top of the building to put a stop to all sorts of criminal mischief. There are a few comic book sequences that are fully voiced, plus each section of the building comes with its own narration. The voice acting is surprisingly good, even.

As far as game structure goes, RICO: London is a rogue-lite, like its predecessor. Well, sort of. When choosing the story mode, you have a choice between easy and normal. Easy is listed as not having permadeath and for having enemies do less damage. But normal doesn’t have permadeath, either. Whenever you die, you can load back up from the start of the last level regardless. I guess it’s a bug, but I’m not sure. That’ll get fixed, maybe? But I think the last game did the same thing as well, so maybe not. However, attempting to load from the start of a level in a daily run made my game freeze. It’s worth noting that Tim didn’t have this problem, though. 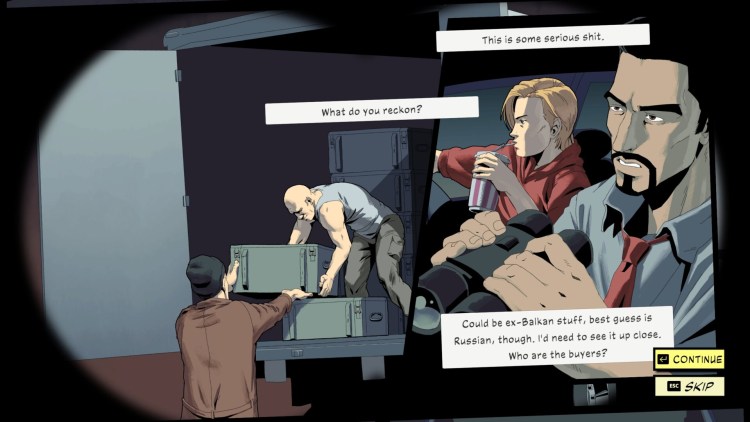 Breach hull, all die. Even had it underlined

The last game had players unlocking new gear and customizing their loadouts before jumping into individual maps, but RICO: London is several levels all within one impractical building. Once you get to the end of a level, you’re awarded merits that can be used to purchase supplies and upgrades. You can buy new weapons, but they run out of ammo fast and you have to kill an enemy with the same weapon to get more bullets. So you absolutely shouldn’t buy weapons. You’ll constantly be switching between guns anyway, even though enemies frequently drop them through the floor, making it impossible to pick many of them up.

There are also upgrades to purchase. You can equip three of these, and they buff or reduce damage, let you slide further, etc. The most important thing is that you can buy revival syringes and health packs. In the story mode, you can go a while without being able to buy anything, though — plus everything was very expensive. You can earn a maximum of 10 merits per level, and a single medkit or syringe costs four (better be careful). Regardless, the general gameplay of the previous game is very much still here. You kick, run, or slide into doors to open them and then attempt to kill everything you can while time is slowed down.

Movement and aiming are better this time around, plus you can jump, which is actually helpful in spots. The controls are quite good and, when RICO: London works as intended, it can be a lot of fun. Instead of the focus on clearing whole maps room by room while destroying assets and grabbing intel, you just kill everything as quickly as possible. Every kill gets your score multiplier higher. Running through as fast as you can while keeping your multiplier high is exhilarating on top of being ridiculous. 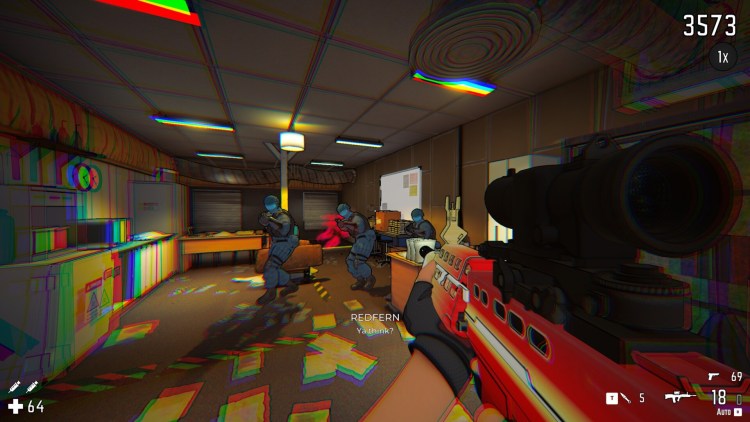 You used to be cool

Unfortunately, certain aspects of RICO: London are notably worse than its predecessor. I think it’s supposed to be more of a score-attack spin-off than a sequel, which fits, but it’s not entirely clear. Enemies react to damage less believably this time (not that they were that great about it before), and the amount of damage they take has gone up. It pretty much always takes two headshots to drop a normal enemy, as opposed to the one required last time. When your bullets hit, enemy reactions are less impactful, and the blood effects aren’t as impressive. Even worse, the game is missing some of the helpful features that you’ll find in its older brother. You also don’t seem to be able to rebind keys, which is a bit weird.

There’s no map now, and supplies in the rooms are no longer highlighted. Granted, you don’t need a map as much, but, later in the game, you need to rescue hostages, and you’ll have to run around and look for them to unlock certain doors. Sometimes, you’ll hit a dead end. A map would have been appreciated here. Strangely, you can kill the hostages and it doesn’t make any difference. As long as they’re either rescued or killed, the door will unlock. The supplies are even worse. You’ll find medkits, ammo packs, and throwable packs scattered in the game’s rooms, but they’re extremely easy to miss. Sometimes they don’t show up enough in the first place. I can’t tell you how often I found myself begging for a medkit.

But the worst thing about RICO: London is how cheap it can be. Some enemy fire will hit you the split second you breach, giving you no time to react. It doesn’t help that a single enemy can drain most of your health in no time. The grenades are the worst of it. They have a ridiculous amount of range and enemies sometimes drop live ones upon death. I often found it impossible to get away from the ensuing explosions. The grenades have a lot more range than in most games, so you’ll get hurt even when you think you’ve gone far enough. Then there are the melee enemies that, even though time is slowed down, can hit you absurdly quickly. Also they’ll do so the moment you enter a room if they’re standing right by the door. 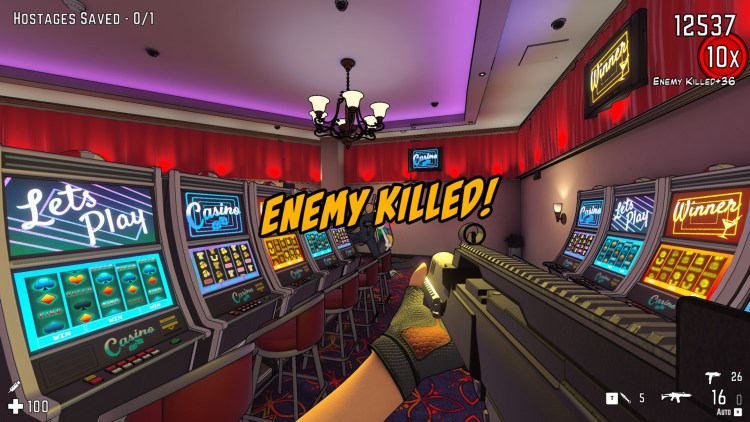 Much like last time, you can play RICO: London co-op with another player. However, this game’s co-op is not even close to ready. Enemies mostly seem to only register one of you at a time, so they’ll often fail to acknowledge the second player they see. I also saw multiple instances of enemies not spawning into rooms until I entered them, as well as enemies who were often turned the other way when we entered. In single player, they were almost always looking right at me as I came through the door.

The worst, though, was that the levels refused to load correctly in co-op. The way forward would be denoted by a doorway with a gray void beyond it. Venturing forth saw both myself and resident wizard Tim McDonald fall indefinitely upon entering. Granted, he and I are on different continents, so some of that could be desync issues. RICO: London is pretty fun when it works well, but it’s got too many issues.

Between the number of ways that the game is worse than the last one, coupled with the game’s cheapness, questionable mechanics, and broken co-op, there’s just a whole lot to be wary of. That and there’s nothing to unlock and no mode customization. You can either do the story mode or a daily mode with random starting weapons and perks that skips the narrative. You might want to skip the whole thing entirely. Although I do want to say again that, when the game isn’t tripping over itself, kicking doors open and doling out endless headshots is still quite a lot of fun.

RICO: London can be good fun at times, but it's also janky, unpolished, and frustrating. Also, the co-op's broken. That doesn't help.