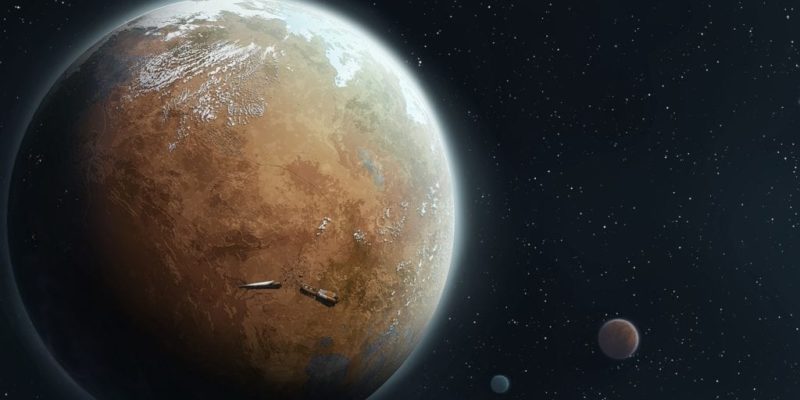 I have never been able to play Dwarf Fortress, and this makes me sad. I’m okay with ASCII stuff – I’ve played NetHack, ADOM, ZZT, and loads of other games with character-based visuals. I’m okay-ish with convoluted interfaces, too. But apparently a combination of both is too much for me.

Praise the deity of your choice for RimWorld.

Over the last week or so I’ve been able to play both Alpha 13 (the one currently available) and Alpha 14 (the one due for release very shortly, to coincide with RimWorld hitting Steam Early Access) and I think it’s about time for some sort of article, because RimWorld is a bit bloody good. 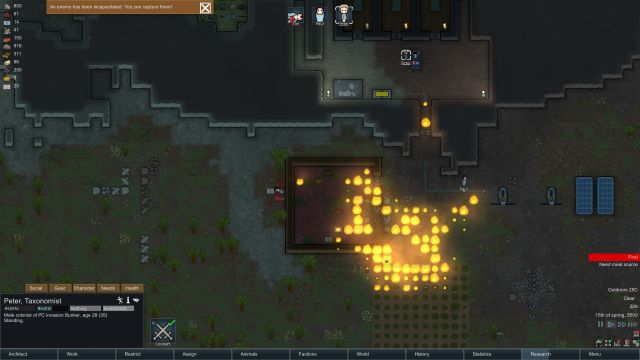 In my experience, this is how basically every game of RimWorld ends.

Think of it as a sci-fi cross between Dwarf Fortress and Prison Architect and you’re not too far off. You manage a group of three randomised colonists who’ve crash-landed on a procedurally generated planet, and you need to help them survive. (And, uh, possibly get off the planet. I think. I don’t know. I’m still trying to handle the “survive” bit.)

This means carving out a home, building furniture, setting up power supplies and food sources, taming wild animals, constructing defences to fend off raiders, and making a stand on whatever crappy ball of dirt you landed on.

That’s how it was, anyway. Alpha 14 changes this up massively with the introduction of scenarios, which also let you play as a tribe of five on the planet, or as a lone weirdo who’s gone seeking excitement. Or – and this is where it gets really interesting – you can craft your own scenario, or generate one according to a seed. 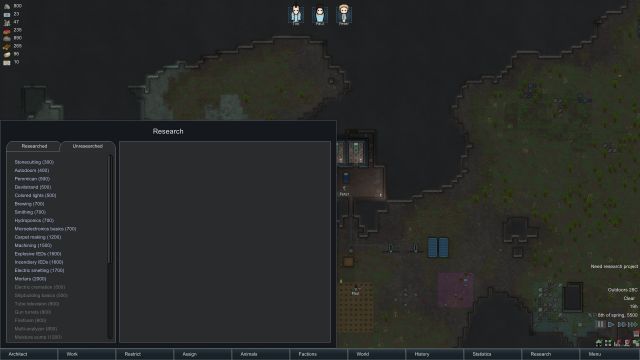 Making a pretty base is important, but do not neglect research.

Obviously, I created the scenario “pc invasion”, which had a trio of under-50s landing on a planet with hangovers. The planet was covered in toxic fallout, slowly poisoning anyone outdoors, and in 400 days an “interstellar planetkiller weapon” was going to wipe out all life. Oh, and we started with a TV and 57 granite sculptures.

I’m going to say right now that this did not end well.

I generated a planet with the seed “pc invasion” and, buoyed by inadvisable confidence, had the game randomly select a starting location on this planet for me. It dumped me somewhere with an average winter temperature of -32 degrees Celsius (-25 Fahrenheit, American cousins) with a plant growing season of “Never.” 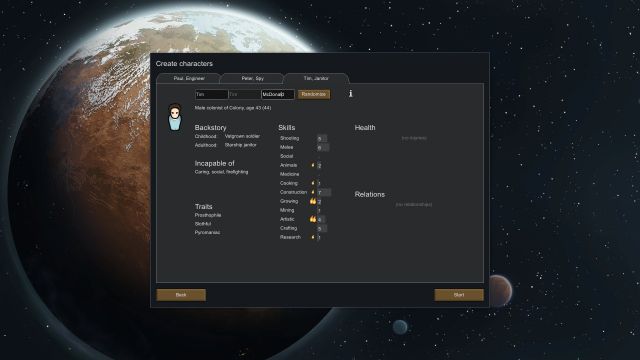 Me, as a 43-year-old janitor who is incapable of giving a shit or socialising. A terrifying glimpse of the future, I fear.

Now all we needed was a stalwart trio of colonists to brave the toxic desolate wasteland. Thanks to the joy of random generation and then changing names, we wound up with Paul Younger (nervous; prone to chemical addictions), Peter Parrish (abrasive; incapable of intellectual work) and Tim McDonald (pyromaniac; incapable of caring, being social, or firefighting).

Everyone started starving, and then Paul ate the corpse of our pet monkey. This drove him insane, so we had to club him to death. Meanwhile, because nothing would grow we had no wood and no plants and no animals, and while I desperately tried to set up some sun lamps or something so we could grow actual food, the occasional rainstorm kept causing them to short-circuit and explode. Which, because Tim was a pyromaniac, he quite enjoyed. 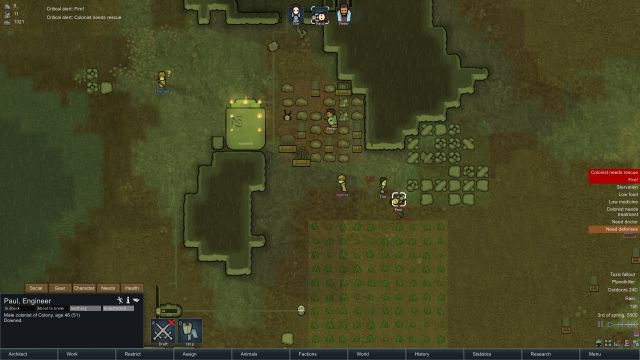 The lesson here is that Paul should not be allowed to eat raw monkey.

Let’s try this again. Basic scenario of three colonists, who I will keep generating until they’re not depressed asocial pyromaniacs, and I’ll pick the bloody starting location. I will, however, stick it on Permadeath mode, whack the difficulty up to “Challenge”, and set the AI storyteller (which dictates what events happen and when) to be completely random. Planet seed: “bunker”.

First orders of business in RimWorld are usually to set up a few stockpiles (for trash, for supplies, and for food) and to get some sort of food source going, like a little gardening plot. After that, build a little temporary structure with some beds for when night slinks its sneaky fingers over the horizon. Then maybe think about some solar panels and wind turbines, and some internal batteries. And build some walls around your food storage and set up some cooling there to refrigerate your food. And…

Okay, let’s skip ahead a bit. As it turned out, this location was perfect for setting up the PC Invasion bunker. For starters there was a gigantic mountain which was perfect for a subterranean lair, but better still was that the mountain had a big, exposed-to-the-sunlight crater in the middle of it, giving me a defensible spot to set up power and farming inside my bunker. 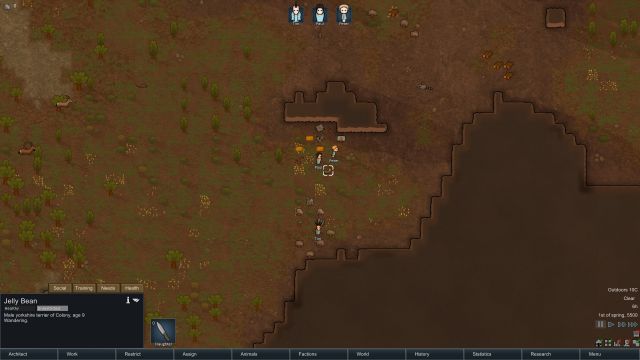 And who could forget Jelly Bean, the PC Invasion dog?

The downside is that research has changed a bit since Alpha 13. Previously, makeshift gun turrets were basic mechanical knowledge, while now they seem pretty far down the tech tree. The tech tree is further adjusted by your group’s technological level – a native tribe armed with spears and knives is going to have a harder time getting to grips with microelectronics than space-faring colonists.

This meant that my usual trick of setting up turrets around the perimeter and keeping my colonists safe simply wasn’t going to fly: when raiders came, we’d need to actually fight. Which would be fine, except Peter was a pacifist and Tim was a really big fan of stabbing things, which is a good way of getting hurt. This meant our rifle went to Paul, and as someone who has played first-person shooters with the actual Paul, that was a worrying thought. Friendly fire is a thing in this, as is damage to particular body parts. A pet cat in a previous game took a stray bullet and wound up spending the rest of the game in its bed with a shattered spine. 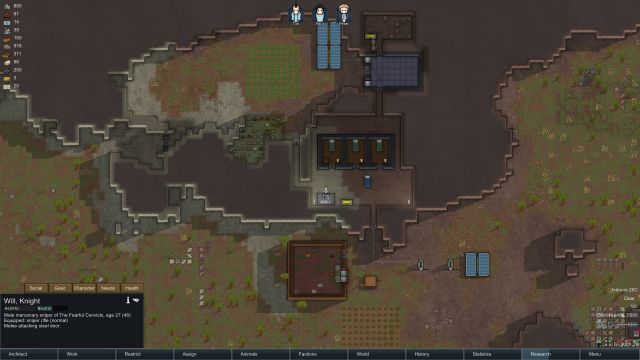 Shitty interiors aside, this is going pretty well as a basic bunker. You know, barring the guy with a sniper rifle coming to punch our doors.

I haven’t quite figured out how ranged combat works in RimWorld, but chance to hit appears to be affected by distance and cover. You can build sandbags for cover, for instance, but hanging around next to a wall or tree also seems to keep people safer than standing out in the open. By the same token, if you have a colonist charging in to fight with a knife, you probably don’t want them in the line of fire of a friendly with a rifle. And, annoyingly, enemies are pretty good at things like “flanking” and “throwing EMP grenades at your sentry guns.” I haven’t lasted long enough to see what proper high-end combat is like, but I’ve got pretty high expectations based on the stone-throwing skirmishes I’ve had.

Nonetheless, our colony flourished. We met a few traders. Some drop pods crashed, supplying us with some random goodies. We fought off tribesmen and raiders. Then things got… a bit worse.

See, the problem with setting the AI to “do whatever, whenever” is that it does whatever, whenever. There are no grace periods between attacks. There’s no guarantee that things will ramp up evenly and easily. So when we barely fought off a raider group that was actually both numerous and armed, and were then immediately attacked by another raider group that was also quite well armed, it really shouldn’t have been a surprise.

Most of RimWorld’s AI comes from fairly clever automation. Set up a stove that demands people work on it until you have a certain amount of meals stocked up, or tell Paul that firefighting is probably more important than harvesting potatoes.

Our only able fighters (curse you, pacifist Parrish) lurched off their sickbeds and made for the front entrance, because I didn’t give a shit about the guy with a knife plinking away at the reinforced steel wall guarding the back. The ones with molotovs and rifles at the front, right next to our power and our food storage, were considerably more of a problem. And you know what? We fought them off. We were bleeding from multiple gunshot wounds; the cables connecting our power to our base were cut off; our food storage facility had burned to the ground and most of our food was gone… but we lived.

While our fighters recuperated from this attack, Peter went outside to move some of the unscathed food from the ruined storehouse to the new storehouse I’d built inside. I’d actually expected this problem and had just completed a new storehouse inside, along with some backup power, so – as long as we managed to get some proper defenses set up before the next attack – we’d actually be alright. The wounds would heal. We had enough food to last until we could grow more. We were okay.

The roof of the storehouse collapsed on Peter, killing him instantly. 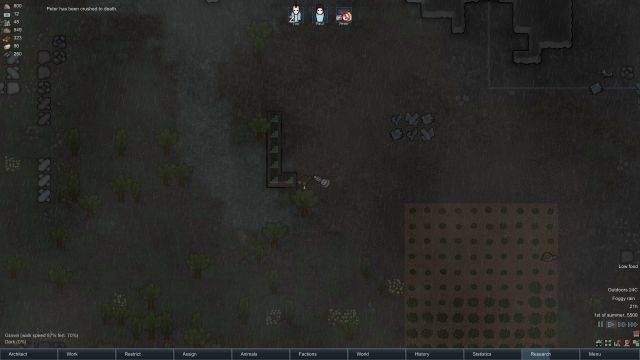 Stories of failure are far, far more entertaining than stories of success, so here are a few more ways my colonies have collapsed in on themselves: someone died of a heart attack, causing our cat to have a psychotic break, causing superficial wounds and then the death of our cat, which led to someone else having a psychotic break due to the death of the cat.

Or the time our batteries shorted and our power cables exploded, and as we were putting out that literal fire, a piece of ship hosting a hostile AI crashed into the ground and started sending out psionic mood-altering waves. I sent our lone combat specialist out to destroy this piece of the ship, and he tripped over one of our traps and killed himself.

Or the time a sentry gun exploded during a firefight with raiders, grievously wounding the person standing next to it, and although the medic somehow managed to drag them away, the other person in the firefight – behind far superior cover, and in much better condition – got shot once and died, leaving us basically defenceless.

Failure is fun. Such is life in RimWorld.

Mai Shiranui Is Coming To DoA 5: Last Round

The rather good Satellite Reign gets co-op multiplayer for free

By Kevin Foley24 hours ago
Features