2018 was an eventful year for Riot Games — the makers of League of Legends — and for all the wrong reasons. Last August, after an investigation by Kotaku into the company’s internal workings and allegations of sexism and discrimination, the proverbial floodgates opened.

Riot attempted to stem the tide, such as hosting a PAX West event for women and non-binary attendees. Things did not go as planned, with Reddit causing a stir and Riot’s own employees making unprofessional remarks. Then, come November, Riot was hit by a lawsuit citing the company’s hostile and discriminatory working environment. Plaintiffs alleged that they were denied equal pay and their careers were stifled all because of their gender.

Riot, to their credit, did something that could only benefit the company, its people, and its fans as a whole. They decided to reevaluate their company’s values, promoting diversity and inclusion. And they’re being as open and public about it as possible. 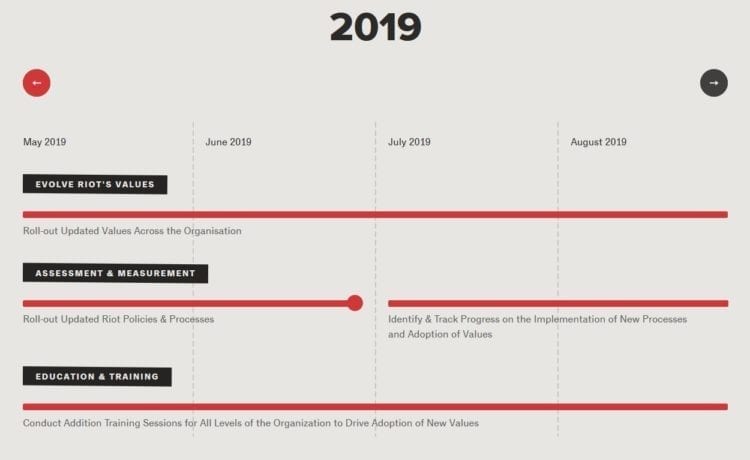 The above shows what Riot calls its “Cultural Transformation Timeline.” It’s part of their efforts to investigate, rectify, and evolve as an organization. Riot hopes to create a working environment that celebrates diversity and allows for inclusion, regardless of one’s gender identification.

In many ways, it’s to tell the public what they are doing to restore the company’s image and own up to their responsibilities. It’s also worth noting that this is just another step in a long line of changes to the internal workings of the company. One can cite the Kotaku investigation as the first major incident, which was followed weeks later by Riot’s “First Steps Forward” post on their website. Therein, the company apologized to its employees, future applicants, and fans whom they’d let down. Here’s just a part of that post:

To Rioters, contractors, former Rioters, and past contractors: We’re sorry. We’re sorry that Riot hasn’t always been—or wasn’t—the place we promised you. And we’re sorry it took so long for us to hear you. In the days, weeks, months, years to come, we’re going to make Riot a place we can all be proud of.

League of Legends hosts a diverse cast of characters and a broad spectrum of millions who play it. As such, it does make sense for Riot to be more open about gender and cultural differences. Why, they even have their own Diversity and Inclusion (D&I) “strike team”. We’re guessing it’s HR work; they just tried to make it sound cooler.

Again, it all falls in line with what the company hopes to achieve. Publicly, they’ve been against online toxicity in their player base. They’ve been part of the Fair Play Alliance, a group of game dev companies out to promote a healthy player community. They’ve also used Psychology and surveys to ascertain and deal with toxic, unruly, or combative behavior for their player base. Ensuring that the company itself is also free of toxicity, hostility, and discrimination makes perfect sense.

Riot is set to roll-out changes to its company values, policies, and processes. We can only hope that all of these, indeed, provide a lot of improvements for the company, its workforce, and for the legions of fans who look up to them.

By Michael Kloos28 mins ago
News