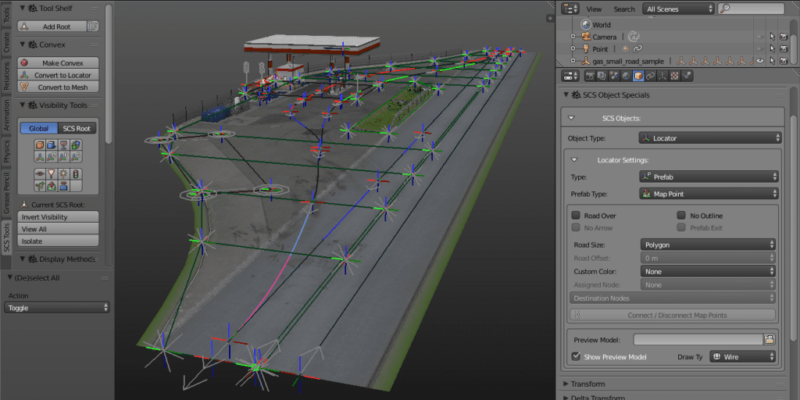 SCS admit they’re late to the party with this but it’s finally here, the Euro Truck Simulator 2 SCS Blender Tools.

In a lengthy announcement post for the mod tools they also revealed that Steam Workshop support is coming for the trucking community. They state that they want to “explore new opportunities with User-Generated Content” mentioning the success Valve has had with games such as  CS:GO, Team Fortress 2 and Dota 2 while looking at ways they can cooperate with the fans.

“After some two years of hard work, the alternate toolchain for modders now comes with pretty much the same power and flexibility as our internal Maya-based set of tools. It now supports complete creation of any type of items: trucks, ambient AI vehicles, models, prefabs with support of all possible locators including AI traffic lines, you name it.

“With upcoming support through Steam Workshop – yes, here is a little pre-annoucement right here! 😉 – we would love to find a way to invite the best mod content creators to offer their creations through an official channel, or possibly even to pursue a business model that would allow for it to become a part of the standard game content. But to even start thinking about it, we need to make sure that such user content is authored and maintained through a standard tool, a tool which we have under control, which we can update whenever needed, a tool we ourselves are comfortable using. Modders know that our game formats are sometimes changing when we need to make room for a new feature, requiring re-touching and re-exporting of older models. Waiting until (and if) a 3rd party tool support catches up with our changed formats is simply out of question for content that should be working immediately after we update our game. So just to open the gate for officially supported mods, we do need a set of official and well-supported tools.”

It will be interesting to see how SCS handle mods through the Steam Workshop and at least now there’s comprehensive supported tools for the game and the future release of American Truck Simulator which releases early next year.