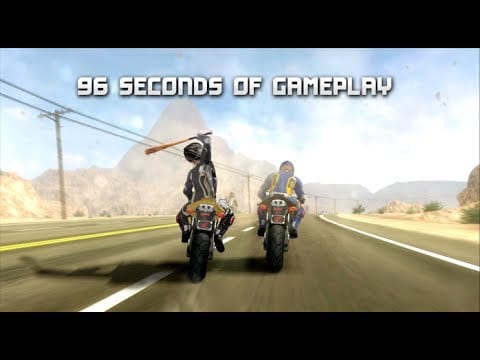 Road Redemption can be seen as the sequel to the late 90’s Road Rash console series. Developed by DarkSeas Games and successfully funded on Kickstarter back in May last year, it’s been such a long time since we last heard or saw anything from the developers, I feared Road Redemption was dead.

Luckily, my fears turned out to be false and DarkSeas Games recently updated their website with a fresh new post revealing some of Road Redemption’s game mode details.

If in-depth answers from our interview with the Road Redemption team still holds true, players start in Career mode by re-joining your motorcycle club as a paroled felon. Career mode enables players to progressively face more difficult enemies whilst traversing across the USA and obtaining badass upgrades to beat down other racers with.

From rooftops to forests and mountains, Career mode will be fully playable in 4-player splitscreen or online multiplayer. If that means a form of co-op mode included, then take my fuel money already!

In addition to the ragdoll physics, it still remains to be seen if there’s an RPG-based skill tree to customize the mechanics of controlling your bike and specialize your character’s abilities.

Multiplayer Quick Play mode allows players to choose a map, weapon set, bike and one of several game types, like last man standing. Whilst players can go one-on-one, man-to-man, the Road Redemption team are excited with the addition of gangs of AI you can control, enabling you to “…earn some cool takedowns…” without being targeted by other players too much (hopefully).

In biker terms, how the AI and players react to possible tail-gunning remains to be seen, however, DarkSeas Games credit smarter AI improvements over the years to improvements in gaming technology according our interview, check it out if you haven’t read it, as it contains a lot of interesting gameplay info and the team’s thoughts on how the gaming industry has progressed to support Road Redemption.

Also included in DarkSeas Games recent game mode post, is reference to League of Legends which got me thinking (dangerous I know) on how the developers could expand multiplayer game types. The SNES based Street Racer was a great game with some innovative game modes, so how about Bike Football (since FIFA 2014 World Cup has just kicked off) or Polo (if you’re a posh biker), but with plenty of kicking, spiked bats and chains instead? I asked their team exactly that and here’s what they had to say…

“Those are great suggestions. We’re actually working on a bunch of cool features similar to the ones you described. For instance we’re working on a grappling hook that you can use to tether to the back of cars in order to get a speed boost. You can also use it to pull riders off their bikes and drag them behind you. League of Legends is also a great reference. We’re working on a PvP multiplayer mode where each player has a gang of AI riders that assist him.” – Ian Fisch.

From Ian’s answer above, the level of creativity going into Road Redemption will make Road Rash fans proud. Maybe I’m still hyped up from all those E3 trailers, but it appears to be a good year from PC gaming, what with GTAV coming to PC as well. To end with more biker terminology, hammer down to Road Redemption’s latest post for more game mode details and check out their latest gameplay video below.