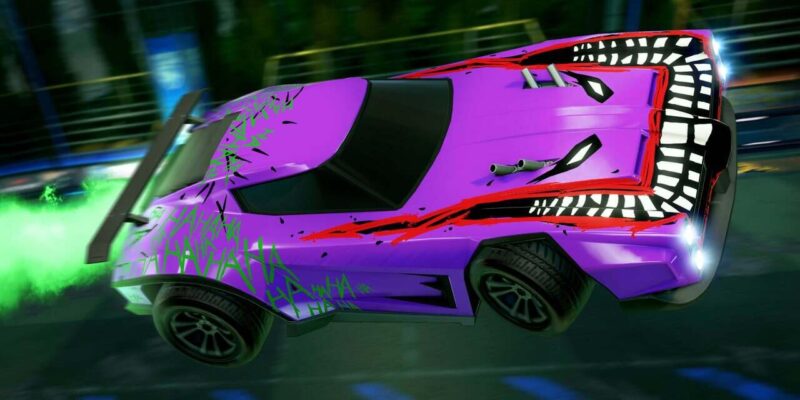 There never seems like there’s a shortage of crossover events for Rocket League. Even with the current 007 themed items in the shop, there’s more coming to the garage than Bond’s Aston Martin. Now, Rocket League is getting spooky with the most recent announcement of the Haunted Hallows and Batman crossover event.

It brings with it goodies from DC’s Batman universe, including the return of the fan-favorite Rocket League addition of the Batmobile for purchase. Hopefully this time it won’t lose a wheel and the Joker won’t get away.

Seriously, how cold do those Mr. Freeze wheels look? Freezing, probably. But, there are more items than just wheels. The Rocket League Batman crossover will have unlockable items that can be obtained through a modified Rumble Mode called Gotham City Rumble. This brings in modifiers like Harley Quinn’s Hammer (replaces the boot) and Poison Ivy’s vines in place of the grappling hook. The Joker also makes an appearance with Joker’s Boxing Glove. As well, you can see his comic-style laughter trail in the trailer.

The Rumble Mode isn’t the only thing getting the Gotham touch. The Beckwith Park arena promises to be sprinkled with easter eggs and “nods” to the Batman franchise as it transforms into Gotham Night. You can cruise around the arena in all the right fits if you’re up for purchasing the Batman Halloween Bundle. The content pack will run you 8,000 credits, but you’ll be able to fully immerse yourself in Bruce’s bat shoes. Here are the following items included in the bundle.

If you don’t have the bat-scratch to go full bore on the bundle, you can purchase the individual vehicle packs for 800 credits each. It should also be noted that “the Batmobile (1989), The Dark Knight’s Tumbler, and the Batmobile (2016) cannot be customized with additional items.”

The Rocket League and Batman crossover event starts today and runs until November 1. Hopefully, this is enough for fans wanting Rocket League to bring back the Batmobile to its shop. If the trailer wasn’t enough, you can read the full announcement here.