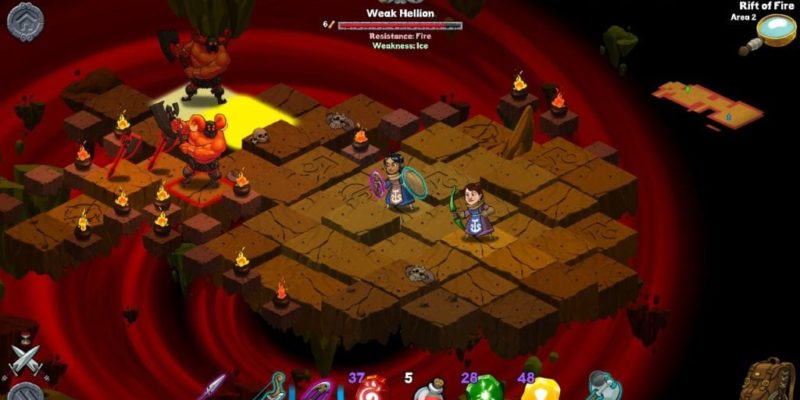 If that’s got you finding your payment details – oh, who am I kidding; Steam has them memorised by now – then you might want to hold off, because that’s not necessarily a good thing. Also, I’m just going to use “roguelike” throughout this, because as a catch-all term for a game with randomised equipment and dungeons and whatnot, it works pretty well. Don’t worry: I’m sure I’ll be back to horrible pedantry by the time the next roguelike-lite-like comes along. 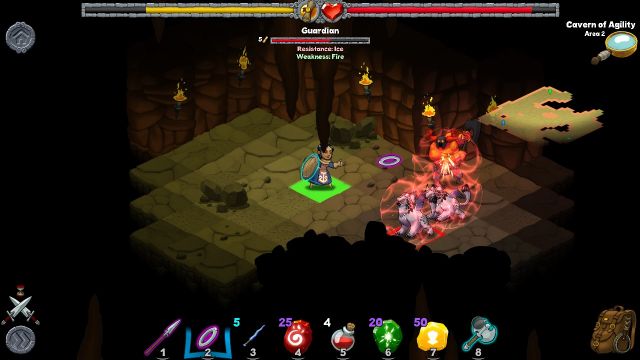 I can’t fault the art direction.

Without dipping too far into the inevitable fantasy terminology, Rogue Wizards is set in a fantasy world divided up between two types of people: elam and banlits. The elam are the ruling class, and they can do magic. Then the elam’s magical power starts weakening, the banlits start becoming capable of magic, and a lunatic seizes control of the wizard’s guild and starts opening rifts all over the world.

Naturally, this means it’s up to you – as a banlit, newly capable of magic – to strike back from a hidden village; closing the rifts, defeating the guild masters, and eventually toppling the madman himself. 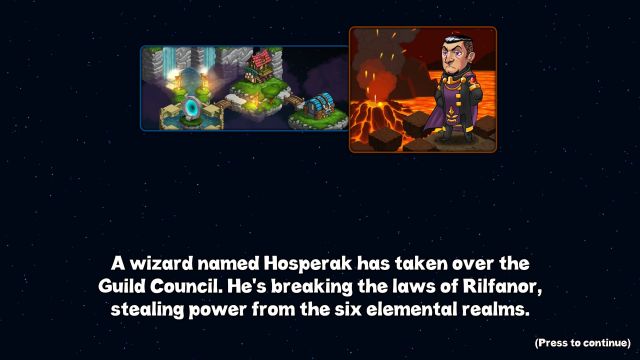 Read: “Hosperak is a dick. Go punch him.”

Rogue Wizards is technically divided up into both town-building and dungeon-diving, but the town-building definitely takes a backseat. On your adventures through the randomly generated dungeons, you’ll regularly encounter allies who’ll join the village and open up a shop or service that you can use after every completed adventure. One guy sells weapons, one enchants items, one stores your crap for you, etc. You can also find items to upgrade most of the services, although “upgrade” is a fairly nebulous term, as it mostly seems to shuffle the stock with some that’s a slightly higher level. Being that gear is heavily randomised, though, that doesn’t really promise it’ll be any better.

Aaaand that’s it for the town-building, which means that the meat of the game is really in the dungeons. 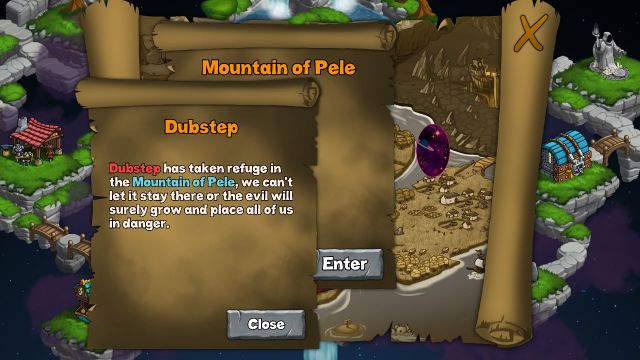 Dungeons like the Mountain of Pele, where you have to take on the dreaded Dubstep. Yeah, I can’t fault the random name stuff, either.

First impressions of Rogue Wizards are incredibly solid. The art – apparently inspired by Bastion with its crisp cartoon-y look, and its tiles sliding out of (or falling into) the void to depict your line of sight – is absolutely stunning.

The enemies, too, are remarkably well-designed. There aren’t too many of them, but they’ve all got at least one individual annoying quirk that can screw with you. One shields allies, while another covers the ground with ice, causing you to go sliding all over the place. One hurls out eggs that – if left unattended – will hatch into more enemies. Others can turn their allies invisible. They’ve all got some bastard of an ability that makes them unique, interesting, and something other than boring damage soaks. 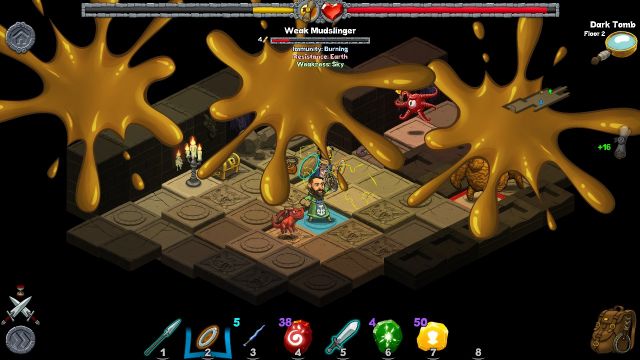 Aaaand then there are these assholes, who rapidly cover your screen in crap and make it impossible to see. I actually like this a lot more than “oh, you have a chance to miss attacks now.”

Magic, levelling, and equipment are all a bit Diablo 2. On levelling up, you get some points to assign to stats, and some points to assign to spells. Each of the six magic schools offer three spells, with each new spell becoming available every ten levels, and they’re not simply flat upgrades on the previous. One Nature spell teleports you in a random direction and heals you, while another summons a bunch of sprites that shoot off like bullets at the nearest enemy once per turn.

While very, very powerful, magic is somewhat limited by the fact that spell casts cost reagents, and those self-same reagents are used in the occasional cauldrons to craft healing potions. The idea is that you need to balance out your spell usage and limit it to when you really need it, with the rest of your combat focused on your weapons. It… doesn’t quite work, but we’ll get to that.

All weapons fall into broad categories – bows, swords, wands, etc. – with each category generally containing a couple of weapons, each of which behave differently. Swords and axes are classed as the same category, for instance, although axes hit multiple tiles. Chakrams count as “bows”, and while they do far less damage, they ricochet between enemies. 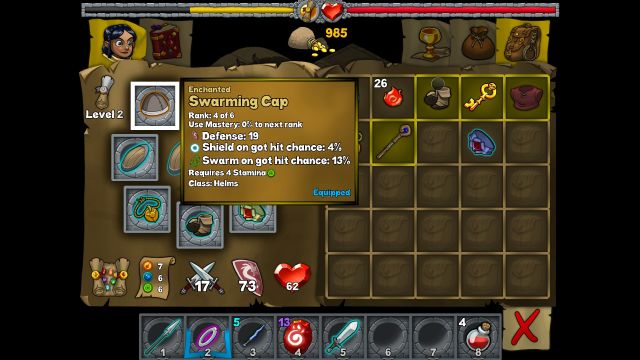 Swarm is an amazing spell, since it’s basically an extra super-powerful attack every turn.

Equipment also has enchantments and occasionally sockets, into which gems can be slotted to improve stats in a particular way. It might be something boring like “+2 to Finesse”, or your chestplate might have the remarkably useful ability to inflict damage on anyone who hits you in melee. Maybe your cap has a chance to cast Swarm every time you take damage. In short, flat armour and damage values aren’t what you really want as the enchantments mean far more. And yes, you’ll get lots and lots of pieces of gear, with each dungeon run usually offering up a couple of dozen that you can either swap in or sell to vendors later.

Add on the fact that there isn’t a great deal else to Rogue Wizards than going into dungeons, beating up monsters, getting better gear, selling crap to vendors, levelling up as you wish, and repeating… well, you might be able to tell why I’m making Diablo comparisons. There aren’t really any other quirks. There’s no hunger and there are no particularly cunning traps or clever interactions. Hell, even permadeath is disabled by default. You simply stroll the corridors punching monsters and grabbing loot.

This is fine, not least because there’s a goodly amount of spells, equipment, and monsters. But there are two very fundamental problems that undermine the entire thing: the speed, and the balance. 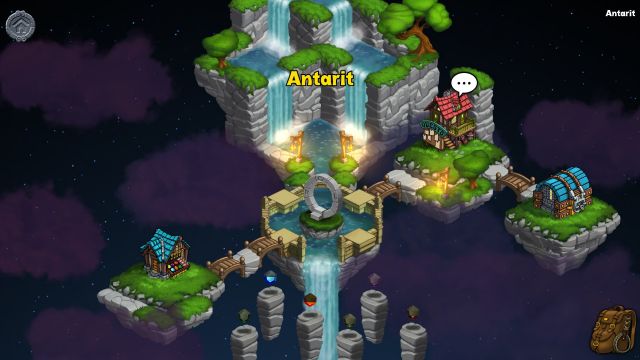 The magical township of Antarit starts off small, but it’s not long before it offers pretty much every service any aspiring dungeon-crawling wizard could hope for.

It doesn’t seem it at first, but gods, Rogue Wizards is slow. Walk into a room with multiple enemies and you’ll be sat for quite some time while all of the movement and attack animations play out. In a game that’s almost entirely based around goblin punching, it’s probably a bad sign if I’m sighing when I see a lot of enemies appear. And considering you get massive amounts of bonus experience for opening all chests and killing all monsters on the floor, this isn’t something that’s easily avoided, because grinding through every room in the dungeon is pretty much the best way to progress.

Still, while an option to speed up animations would go a long way to mitigate some of this, it’s exacerbated by Rogue Wizards being waaaay too easy. I’m not of the mindset that all roguelikes have to be keyboard-smashingly difficult, but barring getting some unlucky room spawns before you have any options to deal with them (looking at you, room full of egg-spawning birds on the very first floor) it’s ridiculously hard to die.

You can carry a maximum of five health potions with you, all of which instantly heal your entire party to full health – and not only that, but the reagents used to make them are common (especially if you’re not using many fire spells) and potions themselves are cheap from vendors. You can normally survive multiple rooms full of foes without much of a problem even without them, because most weapons and spells are obscenely powerful, enemies don’t honestly hurt that much, and the AI is very silly. 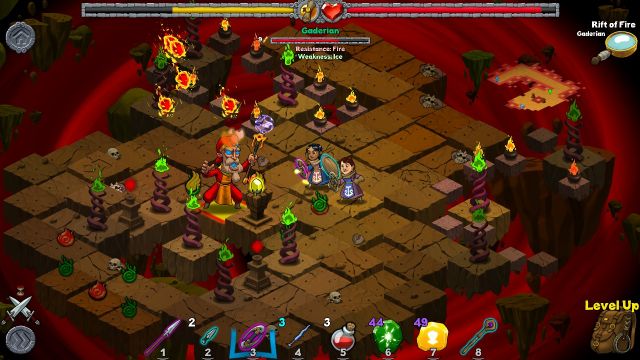 The fire wizard is resistant to fire and weak to ice. As long as you’re not trying to attack with nothing but fire, you’ll be fine.

AI monsters will happily attack a barrel sitting next to them rather than moving towards you, and you are far more powerful than any single monster you’ll ever encounter, with the possible exception of bosses. But boss AI is also easily exploited, or you can just use spells they’re weak to in order to shred their health. You get ample warning as to what their elemental alignment is before going anywhere near their dungeons, so it’s unlikely you’ll be caught unawares.

There are even a few problems that are really bizarre. One enemy, for instance, can cause you to hallucinate. In most roguelikes this is hell, because not only are you seeing things that aren’t there, but the huge dragon that just wandered in might look like a goblin, your ally might look like a huge dragon, and there are systems that punish you for just sitting around. Here, you clear out the room with magic or a chakram, and then hit the Pass Turn button until the hallucinations wear off because there’s absolutely no penalty for waiting. I’m fine with not having a hunger system, but the hallucinations in particular feel like they were shunted in from another game without a clear understanding of what originally made them work. 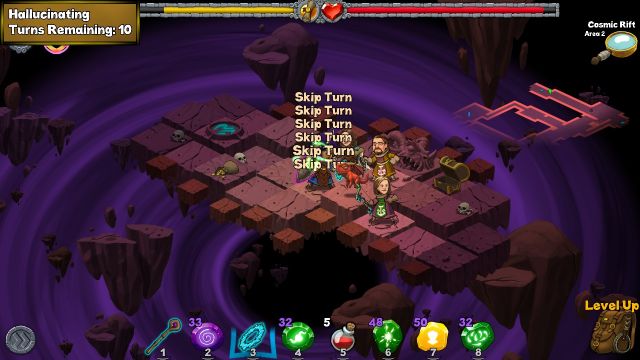 Over the course of the game’s 10-hour-or-so campaign, I think I died twice, and both were due to overconfidence and not using a healing potion when I had the chance. It’s probably telling that – on starting the game’s infinite dungeon crawl mode – I didn’t quit when I died, but when I got bored about five dungeons in. Rogue Wizards lacks challenge and threat.

Like I said: I don’t believe all roguelikes have to be stupendously difficult, but most rely on you learning things bit by bit as you play. You achieve victory through experience and smarts, not through sheer repetition. This, ultimately, is where Rogue Wizards falls. It’s too simple and too light in every aspect, too easy by far, and too slow to avoid those issues becoming hugely frustrating. This also means that there’s very little value in replaying it.

Rogue Wizards might be worthwhile for someone seeking a basic dungeon crawler with a few ARPG-like twists, or as a gentle, gorgeous-looking entry-level roguelike. Given a bump in speed, it might be a fun little casual crawler to help you while away the hours. But for now, those who’ve taken turns in random dungeons before are probably better off sticking with Nethack, ADOM, Elona, Tales of Maj’Eyal, Angband, Crawl, Dungeons of Dredmor…