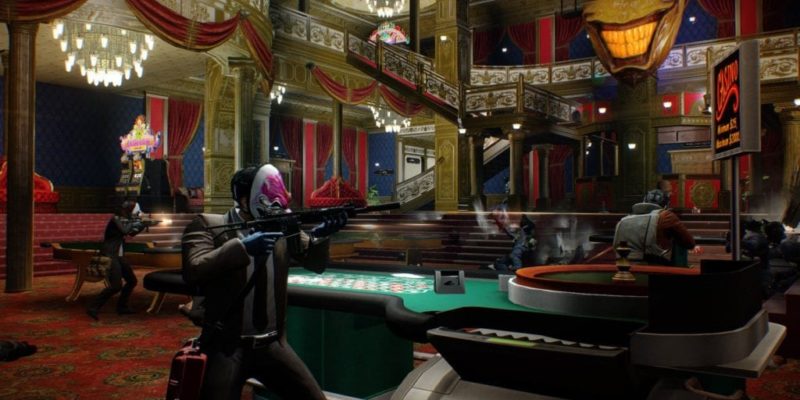 Two more large lumps of DLC have broken into Payday 2, for any players who fancy both another heist and another heister.

£4.99 will give you access to the final contract from the Dentist, titled The Golden Grin Casino Heist. Other than the heist itself – which, as you’ve probably guessed, takes place in a casino with everything from slot machines and blackjack tables to a huge money-filled vault – the heist DLC comes with a new gun (the Cavity 9mm rifle), three modifications for that gun, four new melee weapons (including a taser), four new masks (including what looks suspiciously like an Elvis mask), four new patterns, four new materials, and five new achievements. Whew. Although, to be honest, I’m pretty sure any decision to drop money at this casino will come down to the quality of the actual casino heist itself.

Also available, for £3.99, is the Sokol Character Pack. This adds Sokol the Russian as a playable character, along with his mask, his hockey stick melee weapon, and the Valkyrie rifle. It also adds the Grinder perk deck, which “is inspired by ice hockey, where it reflects a strong work ethic, team play, and a willingness to reduce an opponent into bloody fragments.”

Both of these DLC bits for Payday 2 are out now, and can be located on Steam. And for the record? These are the 24th and 25th DLC packs for Payday 2. Good grief.

Guy Claims to have Fallout 4 on PC