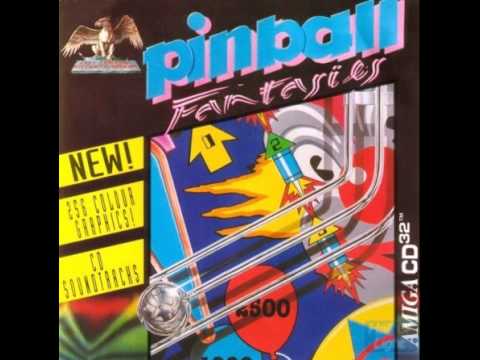 With the cavalcade of pre-Thanksgiving blockbusters now beginning to fade into a distant plume of dust, it’s refreshing to look at a game that’s trying something a bit different. Big money sequels have their charms, but if any month tends to highlight the play-it-ultra-safe trend for “slap a number or a subtitle on a well-established series” it’s November.

Rollers of the Realm isn’t playing anything safe, and while I’m sure its creators would be delighted to meet with commercial success I’m pretty confident none of them ever attended a board meeting where the agenda was mainstream appeal. I say that because Rollers of the Realm is a videogame pinball title. If that’s not quite niche enough for you, it’s also a pinball game with light RPG mechanics. 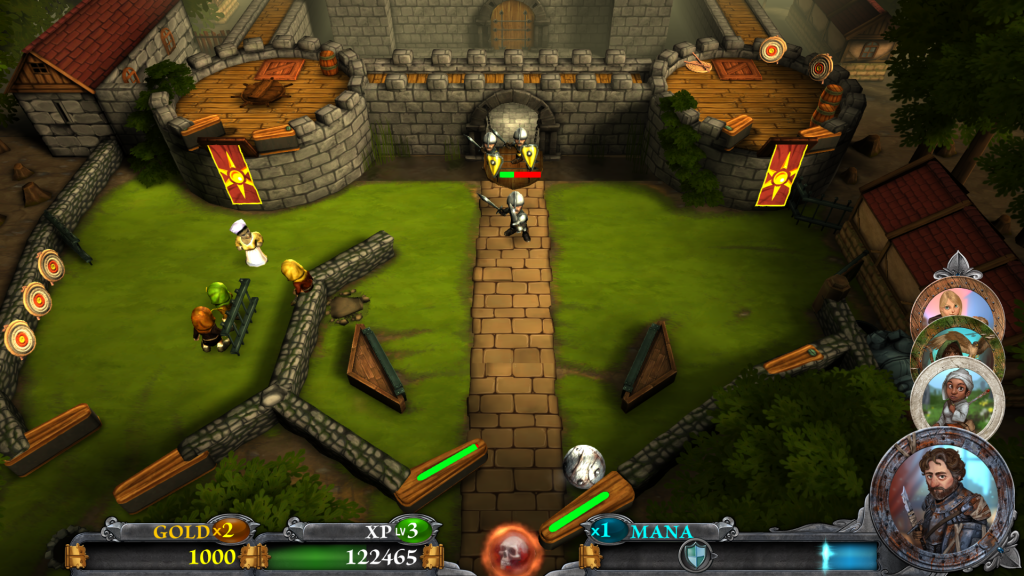 Here, for example, we’re storming a castle. Or sneaking in. There was actually a choice.

Videogame recreations of pinball tables struggle in the same way that virtual attempts at pool do; a lot of their appeal rests on tactility and social setting, which are tough to simulate.

Rollers of the Realm gets around this by applying rules and systems to pinball which could only work within the confines of a videogame. It’s not a simulation (though the ball physics seem perfectly solid,) but instead embraces the medium on which it resides.

During the main narrative mode of play (which constitutes the bulk of the game,) the pinball ‘tables’ serve as the current medieval-fantasy-esque backdrop to your adventures, while the balls themselves are your characters. You begin with just one, a young Thief, but gradually expand your party to include a Knight, Ranger, Healer and more. Each one possesses a particular handy talent, and full utilisation of your party’s skills is the way to progress through each scene.

The Thief, for example, can nab a quantity of gold by bumping into friendly NPCs and causes most damage to enemies when the ball strikes them from behind (backstabbing, see?) Meanwhile, the drunken Knight is heavier and less agile, but able to smash through barricades, knock foes down and generally cause more damage up front. Characters also have mana-based special skills, such as the Ranger’s ability to call trained falcons (multiball!) or the Knight’s temporary, gutter-blocking shield. 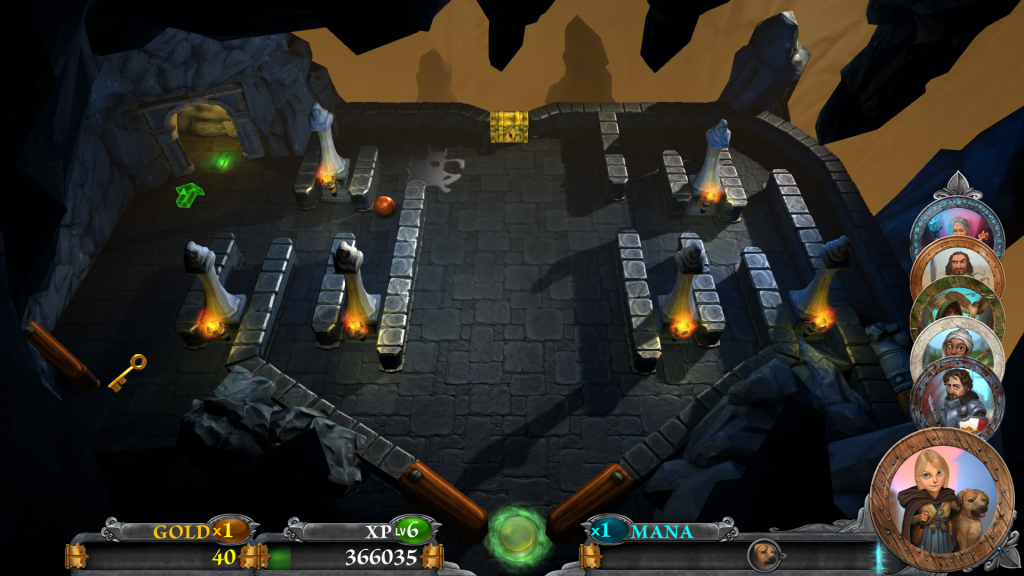 Some of the tables are more puzzle-y. Like this one, which involves bumping into torches to reveal a key.

Gold (for the purchase of special, stat-boosting items) and mana are gained through the standard pinball procedures of hitting the ball into specific stuff, making it spin, or break, or fall over and reaping the rewards. This game’s version of the classic pinball ‘tilt’ is giving the player limited aftertouch control over guiding the ball left or right (which varies depending on each balls agility rating.) Changing characters on the fly is possible by trapping the ball on one of the main flippers and switching to somebody new.

Losing a ball during a period where the gutter is ‘active’ (usually when enemies are around) results in a character’s temporary demise; at least until you reach the next Rollers of the Realm table, or are able to raise enough mana for the Healer to bring someone back.

This does pile quite a bit of pressure on Healer ‘runs,’ where you need her mana bonuses to generate enough to bring back some other characters, but can’t afford to lose her to a foolish error. You later acquire another party member who can drum up decent amounts of mana, but early on you have to rely on the Healer.

Aside from balance quirks like the above, the mechanics are smart and elegant. Rollers of the Realm’s most impressive achievement is making these systems feel intuitive, as if previously honed over several iterations of fictional pinball-RPG titles. As far as I know though, Rollers is pretty much the first (my pinball knowledge extends about as far as Pinball Fantasies on the Amiga 1200, so I could be mistaken.)

Outside of the main single player mode, there are five stand-alone ‘arenas’ with more typical high score leaderboards and the chance to carry a little extra gold back to the party. 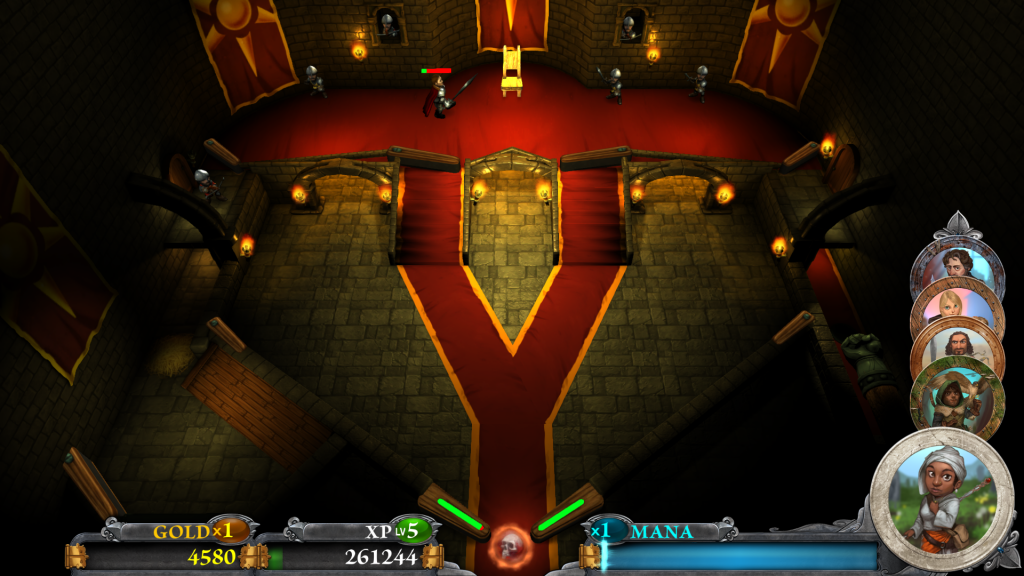 There’s no easy way to say this … you need to bash the Baron with your balls.

Any frustrations tend to be of the standard pinball variety; unlucky ricochets costing you progression on a table, or a tricky shot that you can’t seem to consistently pull off. But there are also some rather annoying sections of multi-stage tables, where if you fall down the gutter you can be sent back two or three screens.

The multi-stage trick is often used well, as a two-part escape from a bedroom onto some ramparts, or trek across some rooftops, but sometimes you run into a puzzle-esque section involving precise manipulation of one of your balls through (say) a maze of sarcophagi. Having to go through a multi-stage process just to reach these parts can get a bit aggravating.

Rollers of the Realm saves its most serious irritating for the end boss sequence, which manages to combine a lengthy, multi-stage sequence with the chance of near-instant death right at the end. While each individual part of this fight is quite well designed, testing your ability to switch characters around in order to triumph in each section, the lack of any sort of check-points means it can be a lengthy slog of half an hour or so just to get another chance at the final stage.

Phantom Compass are aware of this though, and plan to address it in a future patch. 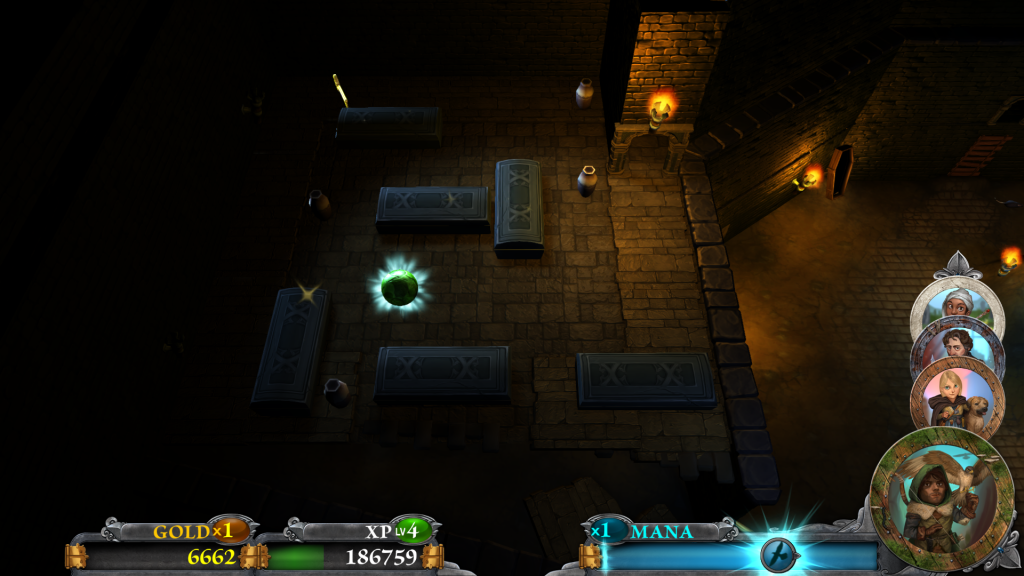 This part can bugger right off.

A quick way to skip introductory dialogue between characters would be another strong candidate for patching. Right now you just have to mash your controller or keyboard (both are viable control options) to reach the start of the table you’re trying to replay for the fifth time.

Not that the dialogue is poor or anything. Rollers of the Realm spins a straightforward but enjoyable fantasy yarn, even managing to squeeze in a fairly endearing relationship between the drunken Knight and willful Rogue. The voice acting goes a bit sketchy at times (I think the Ranger is supposed to be super chilled out, though often ends up flat,) but the tale those voices tell is well worth hearing the first time through.

By accepting the limitations of a game-bound version and drawing instead on mechanics that only a videogame could make work, Rollers of the Realm puts an interesting spin (oh-ho) on traditional pinball. When even a pinball-agnostic player like myself can be pulled through by the ingenuity of the decision to give each ball specific RPG characterisations and abilities, it’s a sure sign of an unconventional design choice paying off.