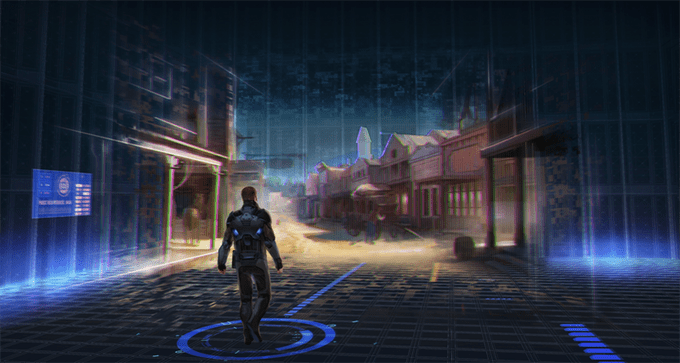 The mysterious FPS from Adrian Carmack and John Romero’s Nightwork Games has been formally announced as BLACKROOM. Which I will never capitalise again.

Blackroom is currently asking for $700,000 USD on Kickstarter. It a PC-exclusive shooter aiming to recreate classic FPS play, promising that you can “use fast, skillful movement to dodge enemy attacks, circle-strafe your foes, and rule the air as you rocket-jump.” Each weapon will have a specific use and niche, too, so you’re presumably not going to be gravitating towards just one or two guns.

And, yes, it’s going to have full modding support and allow for dedicated servers.

Blackroom will contain a 10-hour single-player campaign with additional leaderboard challenge modes (speedrunning and the like), as well as three multiplayer modes: co-op, 1v1 deathmatch, and a free-for-all arena. Six multiplayer maps will be included, although with the modding whatsits, a lot more maps and modes are likely to appear before long.

The premise of the game allows for a variety of settings. Blackroom is set in HOXAR, a cutting-edge tech company who’ve developed the technology to create holographic worlds within the titular black room. Think the Holodeck from Star Trek.

While these have been used both for military training and for entertainment, “simulations are being twisted and warped into each other, and blending with something even more sinister.” You’re a scientist heading in to investigate, armed with both a gun and a Boxel – a tool that lets you “influence the environment, your weapons and your enemies.” As such, you can expect everything “from ruined Victorian mansions to Wild West ghost towns to treacherous pirate galleons and beyond”, all of which will offer secret rooms, hidden passageways, lifts, switches, and all the other bits and pieces that you remember from old-school shooters before we moved into corridors.

Backing at $29 will net you a copy of Blackroom as well as a backer-exclusive weapon skin, while higher reward tiers offer everything from the game’s soundtrack (by metal composer George Lynch) to designing enemies and weapon mods, appearing as an NPC, having a level design Skype session with Romero, etc. Lots of stuff, if you fancy paying up to $10,000.

As far as I can tell there aren’t any stretch goals, but this being Kickstarter, I’m sure some will appear if this starts to pick up steam.

Blackroom is due in winter 2018, and will be available both on Steam and via DRM-free download. Check out the Kickstarter over here.