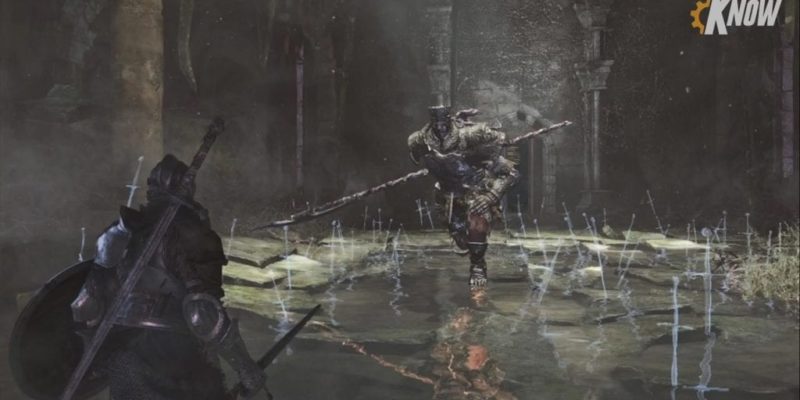 The leak comes from The Know, Rooster Teeth’s show thing, which is incredibly annoying because it means that all of the screenshots and concept art and whatnot are in a video and not in a form I can easily upload and reproduce here for your clicking pleasure. Still! There’s some information, so we’ll go over that.

Before we begin, a gentle reminder: we’re considering all of this rumour. It all sounds pretty plausible and the screens look authentic, but as it’s from an anonymous source, it’s pretty much impossible to verify.

First things first, then. Dark Souls 3 is reportedly coming to PS4 and Xbox One in 2016, with a PC release listed as “negotiable.” The Know reckons that this means it depends on sales and time and so on, though I’d argue it’ll probably be more like Dark Souls 2 – it’s coming, but at a later and unspecified time. Considering how well Dark Souls and Dark Souls 2 were received on PC, I’d be genuinely surprised if From Software thought a PC version wasn’t worth it.

It’s listed as “1-4 players”, which… is not actually a change, as far as I can tell. It just means, presumably, that there’ll be a maximum of four players in your world instance at any given time. The Know talks about the possible implications of this and how this might be a big change, but, uh, I’m pretty sure the original Dark Souls could support four people at once in a world instance.

In terms of other raw numbers, you can expect 45 new enemies and 15 new bosses, with a note that this doesn’t include enemies and characters that appeared in previous Souls games. There’ll also be 100 new weapons, 40 new armour sets, 10 character classes, around 12 areas (with a note that it’ll offer roughly around the same amount of content as the original Dark Souls), and 60 minutes of largely in-engine cutscenes.

There are your raw numbers. However! Dark Souls 3 also looks to be bringing a lot of changes with it.

Instead of using White Soapstones to summon friendly phantoms, you’ll now perform a “Sacrifice Ceremony” by dragging a body around with you. On sacrificing it, you can enter into another player’s game. Doing this has other impacts, though; it apparently puts a sort of bounty on your head, which sounds a bit like Bloodborne‘s Beckoning Bell mechanic, which opened you up to both co-op and PvP at the same time. Bizarrely, it’ll also change your game, such as creating a bonfire or letting you summon an NPC. I’m sorta hopeful that this will be a temporary bonfire so that you can help someone out in co-op, rest up, and then help someone else out, rather than actually letting you create permanent save points wherever you like, but… oh, who knows. It’s Dark Souls. I’m sure it’ll wind up getting you horribly murdered rather than helping you out.

Bosses will reportedly have a new “Heat Up” mechanic, where they’ll actually change based on you doing… completely mysterious and unexplained things. The example given has one boss who appears to be a halberd-wielding knight, but through this weird mechanic, said boss may instead become a giant horrifying eldritch demon monster abomination thing. Which, again, is quite reminiscent of Bloodborne‘s Insight mechanic, which let you see different things in the world and changed up a few enemies’ attack patterns (and that, in turn, was reminiscent of Demon’s Souls‘ World Tendency system). Anyway: this sounds suspiciously like that, only extended to completely switching up the bosses you face. If so, then I approve, particularly because that’d be quite a thing for replayability.

Finally, there are “Sword Fighting Arts”, which sound like equippable special moves. “Rush In” has you take damage and dive into an opponent, but then follow it up with a big attack, while “Circle” is a dodge that lets you get away from an opponent while you’re vulnerable post-attack. So, uh, cancelling your recovery animation, I guess. I’m also going to guess that these will function a bit like spells, only you use them when you have melee weapons equipped, which should make that spell slot a lot more useful for melee-centric characters. Again, I tentatively approve.

And that’s basically your lot. You can watch The Know’s leak show for yourself below, but if it’s true, we’ll likely be hearing more about Dark Souls 3 at E3 2015 sometime around 16 June. It could all be a big hoax, of course, but nothing I’ve seen yet is setting off alarm bells; the screens (albeit in low-res YouTube form) look authentic, and the details sound like a continuation of what was done in Dark Souls 2 and Bloodborne.