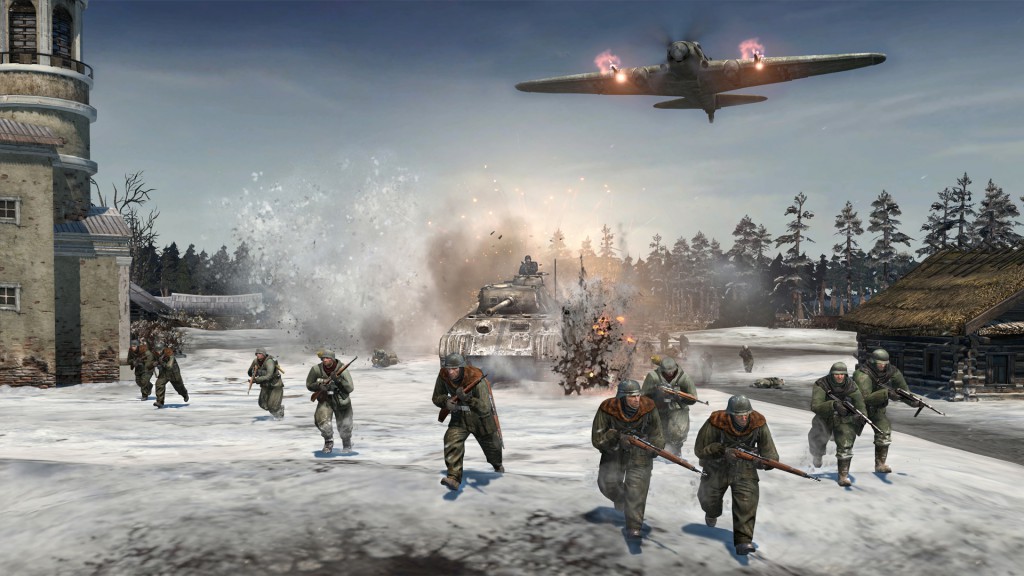 Even the harshest winters of the Eastern Front of World War II cannot turn back the endless march of the pre-order bonuses. THQ has just announced a whole host of them for Company of Heroes 2, so whether you want bonus Team Fortress 2 hats through Steam or early beta access through THQ’s own store, read on for your options.

Everyone who pre-orders will get a couple of bonus vehicle skins for the “German Rotbraun and Soviet Leningrad”, with GAME pre-orders also netting you an additional skin for the heavyweight “German Disruptive” and Origin pre-orders nabbing a “Soviet Bryansk Front” skin.

If you pre-order on Steam, as mentioned, you’ll be “enrolled into the exclusive Steam Pre-Purchase Tiered Reward Program” and on the way to unlocking things for Team Fortress 2 and Dawn of War 2: Retribution. Amazon will be offering access to the Closed Beta sessions for the game, and THQ’s own store is also touting early beta access.

Ordering through THQ will also get you a ‘Command Pass’, which entitles you to special bonus multiplayer maps and access to exclusive community events.

Got all that? Alright, let’s move on to the Digital Collector’s Edition (£70 GBP) which pre-purchases the first three single player DLC packs when they come out and gives you the Command Pass detailed above. More tank skins will come your way too, namely the “exclusive heavy German Whitewash and Soviet Winter Cobblestone” skins. Best of all though (and something that actually sounds worthwhile), you get the original Company of Heroes and both of its expansion packs.

Company of Heroes 2 is coming to the PC in early 2013. If you’d like to know about the actual game, rather than the bits and pieces that you’ll have to cough up early cash for to keep the financially-troubled THQ in business, have a read of our interview here.