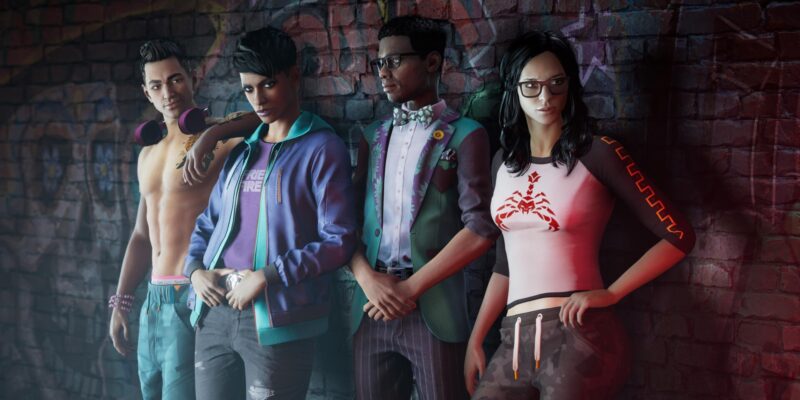 So, we’re getting a Saints Row reboot. The fact that we’re getting more Saints Row probably shouldn’t surprise anybody. Not only is it one of Volition’s best and most popular franchises (alas, poor Freespace), but Volition made mention last year that the company was hard into development.

We probably also shouldn’t be surprised that this is a reboot. While trying to avoid spoilers, let’s bear in mind that Saints Row IV opened with the destruction of Earth and effectively gave us superpowers (in spaaaace!), and then Gat Out of Hell quite literally went to the afterlife. At this point, there aren’t many places left for the former Saints to go.

So, it turns out they’re going nowhere. Instead, a new group of Saints are starting up in the American Southwest city of Santa Ileso, as a complete reboot of the franchise. These are the new Saints, and as much as the series is starting from scratch, so are these characters.

The boys aren’t back in town

That deserves some reiterating: these are new characters, in a new world. There’s no Johnny Gat, no Pierce, and no Kinzie or Matt Miller. And while you’re still the Boss, you’re a new Boss. There will probably be some Easter eggs and nods to the past, but this is by all accounts a completely separate universe.

In this Saints Row, the Saints aren’t an established organization: it’s one you’ll be creating. The game’s tagline of “Self Made” brings this to the forefront. You’re building a start-up! It’s just that your start-up happens to be a criminal organization. 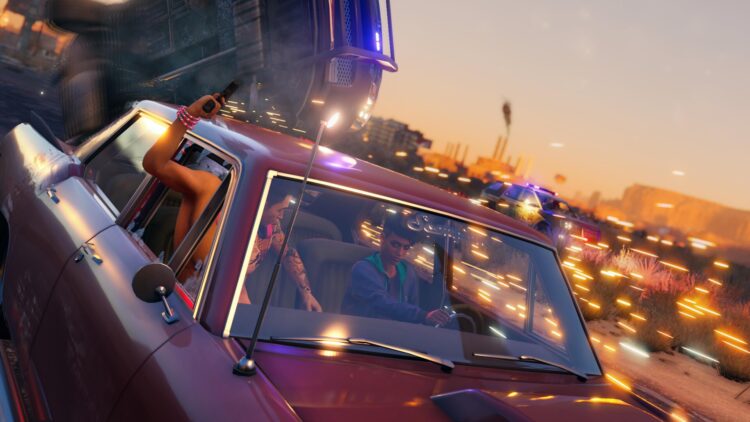 This series refresh also means it’s at least a touch more grounded than the last couple of games. You’re in an actual city again and you’ve got vaguely human limitations, so doing a spot of carjacking and then driving away will once again be the order of the day rather than sprinting through the streets at Mach speeds.

Santa Ileso is divided into nine districts and surrounded by desert, and from what I’ve seen, that means off-roading will come into play more than before. Some gameplay clips I saw showed dirt bikes racing through the desert, and buggies leaping so high off ridges they scaled some nearby hills. 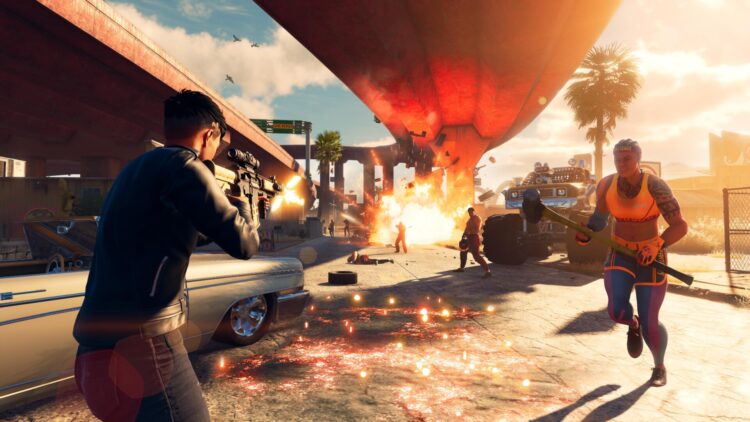 The districts themselves should also be pretty distinct. Rancho Providencia, the home turf of one of the competing gangs, is a bit of a more downtrodden area than the neon lights of El Dorado, which calls to mind the grimier aspects of Vegas.

You’ve got everything from rough slum areas to upscale mansions and resorts split across the city. And then there’s a financial district, full of tall buildings which you can use as a nice launching point for your wingsuit. Oh, right, you have a wingsuit. Didn’t I mention that? Yeah. While you don’t have superpowers, you’re not limited to vehicles for traversal.

This fresh start also means a batch of fresh, young characters. Aside from the Boss, who we can be fairly certain will be a murderous sociopath — er, “puckish rogue” — you’re joined by your friends Neenah, Kevin, and Eli, each of whom brings something different to the table. While the previous Saints were pretty ageless, this cast feels a lot younger. Pretty much all of them seem to be, at their oldest, post-grads who are a bit disillusioned and have decided to make their way in the world through a path they didn’t necessarily expect. Their ages actually seems to be a core part of their characters.

Neenah’s the driver and mechanic of the group. She’s an art school grad who couldn’t get a job at a museum and ended up working for the Los Panteros gang. It turns out she’s quite sick of working for others and would much rather work for herself, which is how she ends up becoming part of the core of the Saints. Then there’s Kevin, a thrill-seeking DJ who’ll go to the ends of the Earth for his friends, and who’s seeking a place to belong and a real family. Initially he’s with the Idols (another of the game’s factions), but he finds that he fits in better with the Saints. 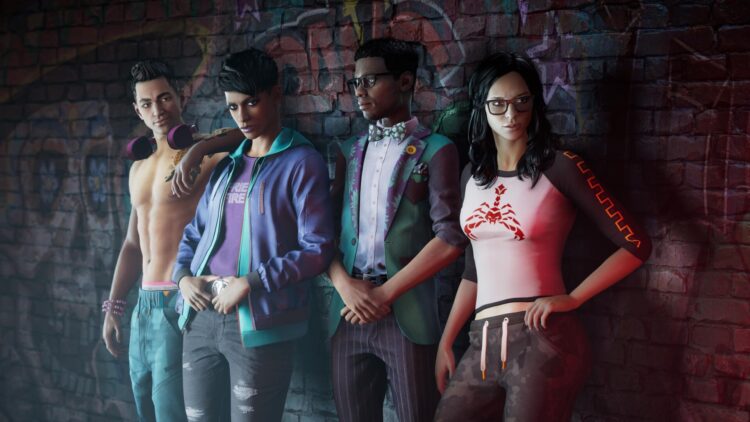 Kevin, the Boss, Eli, and Neenah.

Finally, Eli is a man with a fresh new MBA who wants to be an entrepreneur in Santa Ileso. It just turns out that the business he’s founding happens to be based around crime. He’s got the stereotypical nerd look down with thick glasses and a big bow tie, but he’s got the smarts to back it up, and very much treats the Saints and their rise to power as analogous to any other business. He doesn’t want the Saints to be a street gang. He wants to build an organization. As such, he’s the man with the plan… but he’s also quite handy with a shotgun.

And of course, there’s you: the Boss. We’re promised deeper character customization than ever (with more voices, too), but customization aside, you’re the one who brings them together and starts the whole “let’s work for ourselves” ball rolling.

Warriors, come out to play

One of the other crucial parts of any Saints Row game is the factions, so let’s quickly address them. I mentioned most of them briefly above, but you’ll be pitted against Los Panteros, the Idols, and Marshall. They mostly fit into the niches we’ve seen in other Saints Row games. Los Panteros are all about muscle, physicality, and raw power; they’re the brutal, old-school street gang who like to charge in with sledgehammers. They’re all about the older parts of the city, with a headquarters in an abandoned car factory.

On the far end of the scale is Marshall Defense Industries, a private military company with high-tech weapons and lethal precision. They own and run the commercial areas, and they’re all about the money. 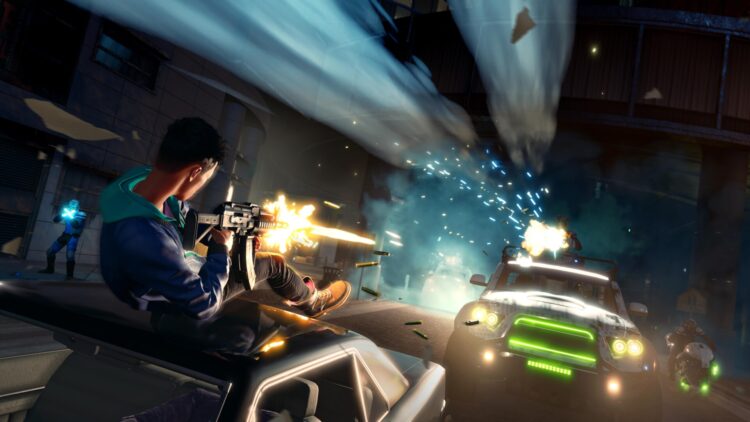 I kinda hope this is a standard gameplay option and not a setpiece thing.

And then somewhere in between have the Idols, who are all about fame and notoriety: these are the taggers, the DJs, and the ravers. A lot of them are the rich kids from the mansions who spend their nights partying and causing chaos. Expect bright colors and high mobility from this lot.

In this Saints Row you’re actually running a criminal enterprise, which means criminal ventures. These are legit fronts you can place down in vacant lots once you take over an area, each of which will open up some new gameplay. You can build a garage to open up auto theft, a medical clinic for the obligatory Saints Row insurance fraud, or go full Los Pollos Hermanos and start a drug-running operation from a fast food joint.

Apparently, the locations of each structure will impact the world, but I’ve got no idea exactly how. It might mean that it’ll change the flow of the game in meaningful ways, or it might just mean you’ll get different dialogue from pedestrians if you open a waste facility in the middle of the commercial district. Which, honestly, seems like a good enough reason to do that. 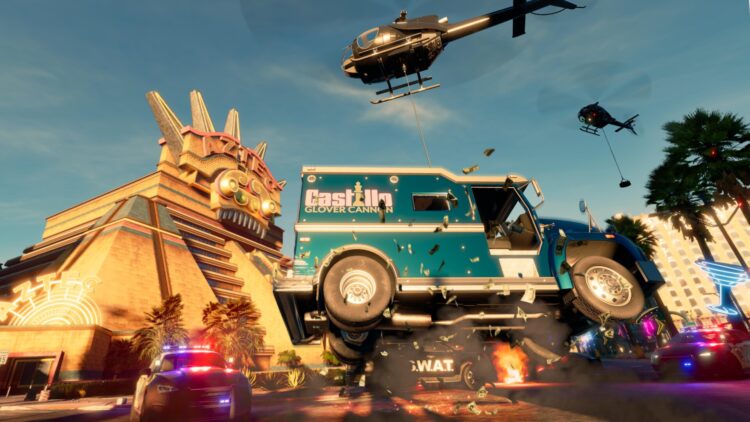 Also not kidding about pinching vehicles with a helicopter.

Those are the basics, but there’s inevitably more. Cross-gen co-op! More customization than ever before! A bigger world than the others, with districts that will feel a lot more distinct!

Honestly, I wish I could tell you everything I saw in the presentation, from the return of the body-catapulting Insurance Fraud activity to using a helicopter and a giant magnet to abduct fancy cars. Without knowing what the reveal will show, it’s also hard to know what I really need to tell you.

So I suppose what I should say is that, from what I’ve seen, it looks like Saints Row. The combat on display has the Saints Row gunplay. The art style is pure Saints Row. Even the physics of the cartwheeling, ragdoll-ing body during the insurance fraud activity looks exactly like it always did. The preview stuff I saw focused more on the more serious gameplay aspects, but I took note of plenty of ridiculousness in there. While I don’t believe we’ll be able to beat people to death with a giant floppy dildo or kill with a dubstep gun any more, with the team noting new ludicrous weapons instead, I’m pretty sure I saw a robot cowboy. 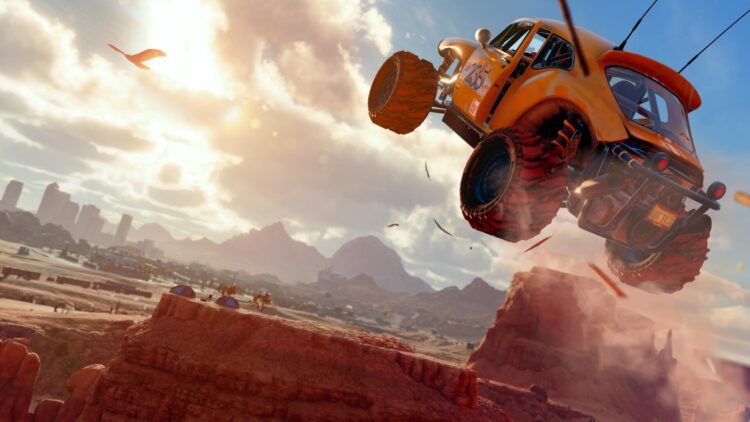 I wouldn’t blame you if you mistook this for The Crew 2, honestly. Saints Row hasn’t really done “big open wilderness” before.

So I’m not concerned about this being more grounded than the sci-fi lunacy of Saints Row IV, because it’ll have lunacy of its own. My concerns lie more in the stuff I haven’t seen. For starters, this Saints Row reboot will live or die based on the characters. We don’t have any of the familiar faces, so these new characters had better be damned good to make up for that. But on the flipside, new characters have pretty much always been entertaining. Zimos, anyone? Eli looks like he’ll be a great foil for any puckish rogue, and taking a serious business approach to a zany crime organization is a fun idea, but I haven’t seen enough of the others to make a call on them.

Likewise, I haven’t seen anything of the actual missions. I can’t imagine we’ll open with an over-the-top bank heist or defending the White House from an alien invasion, but we need some seriously cool set piece missions in here. But again, this isn’t a problem Saints Row has had since its shaky first game. Saints Row: The Third managed to somehow redeem Kayne West, for fuck’s sake, with one of the coolest missions in a sandbox game I can think of at this late hour. 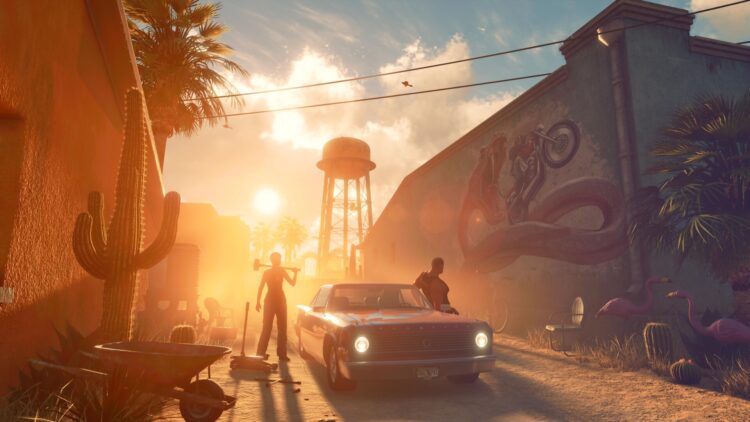 With very, very rare exceptions, I don’t get hyped about games any more. “Cautious optimism” is about the best I do. So when I say I’m cautiously optimistic about Saints Row, take that as a good sign. My initial thoughts were a bit more negative. The American Southwest isn’t an area I’m super interested in, I miss the old Saints, and so on. But the more I turn it all over in my head, the more I realize that I’ve mostly just seen the building blocks of the game, and only hints of the verve and panache the series is known for. And I’m actually happy about that. Volition has never had a problem building that into the game, and if I don’t know what sort of glorious idiocy to expect, that just means a pleasant surprise.

So here’s another pleasant surprise: we don’t have long to wait. The Saints Row reboot is due to release on February 25th, 2022, although it appears to be a timed Epic Store exclusive.